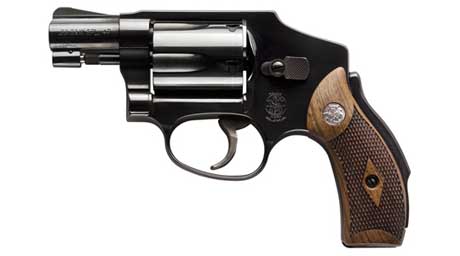 SPRINGFIELD, Mass. (October 1,- 2008) In 1952, when Smith and Wesson® debuted a pair of safety hammerless hand gun revolvers, it only made sense that they be called “Centennial Models” since they were introduced during the legendary gun maker’s centennial year. Now, the Model 40 – or Lemon Squeezer as it is often referred to for its grip safety – returns to production as part of the new Smith & Wesson Classics line.

This five-shot revolver chambered in .38 S&W Special +P is made of carbon steel and weighs an estimated 20.4 ounces. With an integral front sight and a fixed rear sight on a 1-7/8-inch barrel, the handgun has an overall length of 6-5/16 inches. Its small size, lightweight and hammerless configuration make it well-suited for concealed carry. Available in three finishes (nickel, blue and color case), the double-action-only Model 40 Revolver features the old-style thumbpiece, Altamont® Service Walnut grips and a grip safety.

The safety hammerless design that makes the Model 40 revolver so recognizable made its debut in 1887, but enjoyed its greatest popularity with the original Model 40s from 1952-1974. The new Smith & Wesson Classics Model 40 Revolver features the same round-butt frame and stays true to the original design while delivering performance and reliability that the modern shooter demands. The Smith & Wesson lifetime service policy is standard with each revolver.

For more information or the location of the nearest Smith and Wesson Authorized Dealer call 1-800-331-0852 or visit the web at www.smith-wesson.com.

So what you are saying is that the clinton cartel, the deep state, the democ rats with no cause and effect genes, and the Russians, have infiltrated the nra. Probably just another israeli red flag operation!

Ah man, you gotta give us the link (or file) for Praise the Lord and Pass the Ammunition! USA Retired…

i am looking about some information about this gun

will you help me please to take some in

what i need is