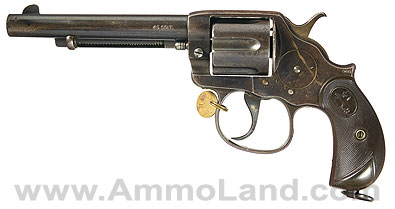 Rock Island Auction Company – -(AmmoLand.com)- The revolver has bird’s head grips with the Rampant Colt in an oval at the tops. The butt is fitted with a lanyard loop.

The barrel is marked “45 COLT” and “COLT’S PT. F.A. MFG. Co HARTFORD CT. U.S.A.” and a small circled Rampant Colt trademark is located on the lower left rear portion of the frame.

Condition:
Arsenal refurbished. The barrel retains approximately 60% of the blue finish with some light spotting while the remaining metal surfaces have a smooth brownish patina with some scattered small areas of original finish and very minor pitting on the frame and cylinder. There are a few minor dings on the frame.

The grips are good having faded to brown showing moderate wear, a couple of notches cut into the lower right panel and a few minor dings and handling marks. The circle around the Rampant Colt is faint, otherwise the markings are clear. Mechanically needs work. Functions in double action. ( See RIA Auction for Exact Condition Details)

Auction Details:
Rock Island Auction Company announces the next Regional Firearms auction to be held at their facilities in Moline, IL. The huge success of our premier sale ($8.5 million) proves that people are investing in what they know: firearms are solid investments that hold value through economic downturns.

Investing and collecting opportunities abound at Rock Island’s fantastic Spring Regional Auction to be held June 27 & 28, 2009. At a time when the stock market changes daily, gun collectors are seeing the worth of their investments.

Hard assets are the place to invest your money and gun values continue to rise. This auction has firearms for every level of collecting and investing from Colts to Winchesters and the hundreds of high quality sporting arms. Rock Island’s continued sell through rate of over 97% proves that items that come to RIAC are for sale and now is your chance to make a solid investment.

About:
Rock Island Auction Company has been solely owned and operated by Patrick Hogan. This company was conceived on the idea that both the sellers and buyers should be completely informed and provided a professional venue for a true auction. After working with two other auction companies, Mr. Hogan began Rock Island Auction in 1993. Rock Island Auction Company has grown to be one of the top firearms auction houses in the nation. Under Mr. Hogan’s guidance the company has experienced growth each and every year; and he is the first to say it is his staff’s hard work and determination that have yielded such results.