San Carlos, CA –-(Ammoland.com)- In an excellent conclusion to another federal civil rights lawsuit, The Calguns Foundation has secured a settlement agreement from defendants the City of Calexico, the Calexico Police Department, Chief of Police James Neujahr, and Calexico PD officer Mario Alcaraz.

Mr. Farias had been driving through the Imperial County town of Calexico in late January 2010, when Officer Alcaraz pulled Mr. Farias over for an alleged traffic violation. After receiving consent to search the back seat of the vehicle, Officer Alcaraz observed Mr. Farias’ shotgun – which was being transported unloaded and exposed on the back seat – and arrested Mr. Farias for an alleged violation of Penal Code section 12025 (a statute criminalizing the unlicensed carry of a concealed handgun). Mr. Farias spent 9 hours in the Imperial County Jail before bailing out and contacting The Calguns Foundation to assist in his defense.

With the aid of Foundation attorney Jason Davis of the law firm Davis and Associates, the criminal case against Mr. Farias was eventually rejected by the District Attorney’s Office. Not only did the DA not pursue criminal action against Mr. Farias, but Davis successfully obtained a rare Finding of Factual Innocence for Mr. Farias, which means that “no person of ordinary care and prudence [would] believe or conscientiously entertain any honest and strong suspicion that the person arrested [or acquitted] is guilty.” Mr. Farias then sued in Federal court to seek recovery of damages and mandate proper training, claiming that that the arrest violated his Fourth Amendment rights, among others.

As part of the settlement agreement, the City of Calexico paid Mr. Farias $35,800 and instituted a training program on criminal laws pertaining to firearms. The training bulletin, drafted by Mr. Davis and available for download at this link, and covers topics of search and seizure, loaded firearm laws, unloaded concealed firearm laws, and the Law Enforcement Officer Safety Act. Significantly, the mandated training program also includes training on the recently passed “Open Carry Ban” bill AB144 and the 116 exemptions under which unloaded open carry remains legal.

“The training bulletin is designed to educate the department on California’s complex and convoluted firearm laws,” said Jason Davis. “My client sincerely appreciates the assistance of The Calguns Foundation, which made it possible for us to aggressively pursue the case.”

“This case is a reminder that exercising one’s right to keep and bear arms is not a waiver of their right to be free from unreasonable searches and seizures,” said CGF Chairman Gene Hoffman. “The more that California and local governments regulate firearms, the more they will have to train their law enforcement officers – or be held accountable in the courts.”

Calguns Foundation is able to help defend innocent California gun owners like Mr. Farias because of the generous tax-deductible donations from people – like you – who care about their civil rights! 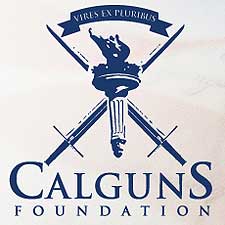