Phoenix, AZ – -(Ammoland.com)- The family of slain U.S. Border Patrol agent Brian Terry was pleased with today’s announcement by the U.S. Attorney of San Diego and the FBI in Tucson that progress has been made in the murder investigation of agent Terry.

The family has established the Brian Terry Foundation (www.honorbrianterry.com) to honor the memory of Brian Terry and to create a living legacy in his name.

“It has been a difficult 18 months for the family since Brian Terry was murdered in December of 2010 and today’s announcement provides hope that justice will eventually be served,” said Robert Heyer, Chairman of the Brian Terry Foundation and cousin to Brian Terry. “The Terry family would like to thank U.S. Attorney Laura Duffy and her team of prosecutors along with the special agents of the FBI’s Tucson Office and the Mexico City Legal Attaché who have continued to pursue leads in the murder case that ultimately led to the additional indictments of the four fugitive defendants. The Terry family would also like to thank the government of Mexico for their assistance in the investigation. It is the family’s hope that the unsealing of details in the case, the identification of the four fugitives and the issuance of reward monies will lead to the eventual capture of all individuals responsible for the murder of Agent Terry.”

“Today’s developments certainly mean that the criminal prosecution of Brian Terry’s killers is moving forward,” said Terry family attorney Patrick McGroder. “However, the accountability aspect of Operation Fast and Furious, the flawed ATF/DOJ gun trafficking investigation that put weapons into the hands of the men that killed Brian Terry, remains stalled. The Terry family once again asks that the Attorney General and the Department of Justice comply with the request for documents made by the House Oversight and Government Reform Committee so that all Americans can know who approved of the operation in order that those individuals can be held accountable for their decisions. Agent Terry died as a hero protecting this country; he and his family rightly deserve a full and thorough explanation of how Operation Fast and Furious came to be.”

The Foundation’s goals are to provide immediate and ongoing emotional support and financial assistance to U.S. Border Patrol Agents and the families of those who have been injured or killed in the line of duty, provide educational scholarships, recognize outstanding Border Patrol agents, and raise public awareness of the problems on the border.

The Brian Terry Foundation is collecting donations to raise funds for the families of slain U.S. Border Patrol agents, to raise public awareness of the flawed Fast and Furious investigation, and to establish educational scholarships. The Terry family wants to make certain that any mistakes made by the Justice Department during the investigation are never repeated. 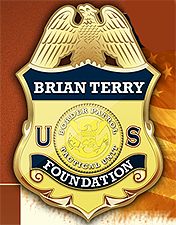