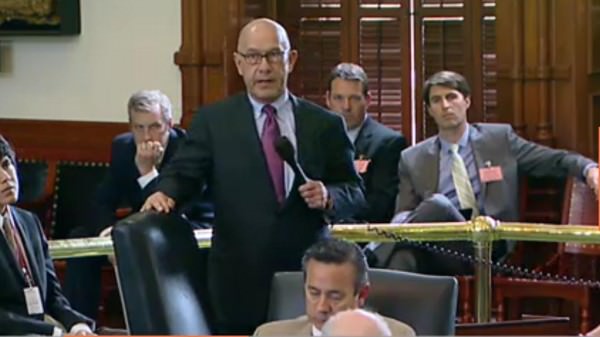 I just watched hours of debate in the Texas Senate on Committee Substitute HB 910.  The Senate Committee had removed the Dutton amendment, that stipulated that the police could not stop you for merely exercising your right to carry openly, and ask for a permit or license.    Here is the amendment:

CERTAIN INVESTIGATORY STOPS AND INQUIRIES PROHIBITED.   A peace officer may not make an investigatory stop or other temporary detention to inquire as to whether a person possesses a handgun license solely because the person is carrying a partially or wholly visible handgun carried in a shoulder or belt holster.

The debate over this amendment, amendment 9 in the Senate, grew almost farcical at times.  Senator Whitmire, Democrat from Houston, a senator for 32 years, engaged in what amounted to a mini-filibuster.  It appeared clear that he was simply trying to delay, delay, delay.  It shows how incremental violations of rights lead to greater and greater violations of rights.  He made the claim that no probable cause is needed to ask for a license, because  game wardens,  and people involved in maritime activities could be stopped and asked for licenses.   Those infringements on 4th amendment rights were being used to justify more infringements.

He said that he is not filibustering, as he is essentially filibustered.

He said that  African Americans are only 7 percent of CHL holders, thus implying that harassment of open carriers was not an important issue.

He must have know he did not have the votes, or he would not have kept blathering.  At the end he admitted the obvious, and said that he opposes the amendment, and would oppose the bill afterwards.

Then Joan Huffman, a nominal Republican from Houston, got the floor and gave the a face to the term RINO.   She repeatedly tried to obfuscate about the amendment, in my opinion.  I lost all respect for her.   At one point, she said “No one is infringing on their second amendment rights.”   I could have given her a dozen examples to prove her wrong, but I am not a Texas Senator. 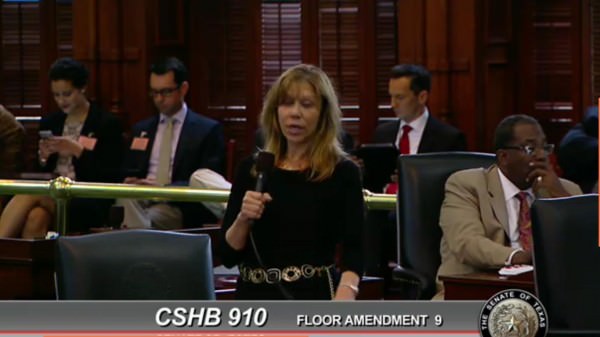 Eventually she asked for a recess to print copies of an amendment. Her five minute break became over 30 minutes, only to withdraw the amendment to the amendment after a procedural challenge. It appeared to be a calculated delaying tactic. As much as she claimed otherwise, her actions seemed motivated by a desire to kill the bill.

Why was there such intense debate over this amendment, which legally, did very little? Simple. If the amendment passed, the bill did not have to go back to the house, and would go directly to Governor Abbott. A vote for the amendment was a vote to pass open carry, with no more legislative games. That is exactly what happened.

Finally, the Senate voted on amendment 9 and passed it 19-12. Then they passed the third reading vote, 26 ayes, 5 nays.

Then they moved to suspend the constitutional three day rule: 26 ayes, 5 nays.

Now the bill will go to Governor Abbott, who has pledged to sign it. There will be a few days to meet the legal requirements, but it appears that open carry will become the law in Texas on 1 January, 2016.

Update: There is a minor wording difference in the Senate bill.  The House may need to concur with the Senate bill to send it to the Governor.  This should be a simple procedure with no scheduling games, and no amendments.

I do not, can not, and will not support this bill. WHY IN HELL SHOULD I BE REQUIRED TO HAVE A LICENSE TO DO WHAT THE CONSTITUTION AFFIRMS (does not GRANT) I HAVE THE RIGHT TO DO, AND THAT RIGHT SHALL NOT BE INFRINGED? How is it that I can “open carry” a rifle or shotgun, which is much more powerful, accurate, and deadly, but not a handgun? Tell you what, members of the state legislature: YOU come to work with ME in downtown Dallas, Houston, and several other cities and their suburbs, in the middle of the night, and… Read more »

Why do we have to wait until January 1, 2016? Once the governor signs it then that’s it, its law, so why the damn wait?

You’re right ! It should become effective the day Gov. Abbott signs it into law.

Ok, I’m confused. Is the bill going to the Governor or back to the House? Anyone care to help clear up the “Update:” portion of this article? Thanks.

To me, the right to bear arms does not discuss open carry Vs. concealed carry. The people should be able to do whichever they choose. Personally, I choose concealed carry because no one else need know about my choice and perhaps make me a primary target. Additionally, when in public, I don’t want an anti-gun person asking or commenting on the fact that I have a gun.

You’re an idiot and the coward. Plus you don’t know piss about what the founders wanted or didn’t want.

Does that include the Secrete Service detachment surrounding the POTUS?

Since Texas law currently says conceal carry by license only, I think your opinion of only cowards carry concealed is crapola. Since I don’t know anything about you except your logic is phucked up I must assume your are either a libatard or a democrat.

I am still at a loss in comprehending why the residents of the great state of Texas, or any other state in the Union, allow their government to place any restrictions upon the residents of their state and visitors from any and all other states right to keep and bear arms. Restriction is equal to infringement. A requirement for a permit approved and issued by a state or municipality and the presentation of which is required to confirm one’s approval from a government entity IS AN INFRINGEMENT! We are not free until we are free!

Open carry is welcome, in my opinion, but it is NOT a license to intimidate or bully! Carry your firearms proudly, sensibly and safely, but above all, CARRY THEM. Show the average person and the skeptics that you are a defender not a threat

I’m really glad open carry is finally here. I got my CHL in ’95 and carry everyday. I will continue to carry concealed but it’s nice to have the option to carry open. Plus,it pisses the gungrabbers off bigtime,and is a victory for the 2A and pro gun rights.

Glad this is happening in Texas, While I will not open carry I love it just another slap in the face to gun control jerks.

SIR THIS IS A GREAT ARTICLE. I HAVE LOBBING FOR OPEN CARRY FOR 6 YEARS AFTER VISITING YOUR GREAT STATE. THE AMENDMENT WAS TO MAKE SURE PEOPLE WERE NOT HARASSED BY OVERZEALOUS PEOLICE OFFICERS AND MORE IMPORTANT THAN THAT RACIAL PROFILING WHOULD NOT HAPPEN.. BLACKS SHOULD BE HAPPY WITH THAT. YOU ARE RIGHT ABOUT SWN HOFFINES SHE DISAPPOINTED ME AS WELL. DEARING THE DEBATE SHE ADMITTED SHE DIDNT HAVE A CHL. NOW ISN’T THAT AMASSING. NO THIS WAS FOR SURE A WAY TO KILL THE BILL. THAY KNEW TIME WAS RUNNING OUT.,RHy knew it would have to go back to… Read more »

Remember the RINOs on election day.

Unfortunately, instead of restoring the bill to be identical with the version passed by the house, there was a slight difference in the wording according to the lieutenant governor which means the bill must go back to the house and be voted on again. Which raises the question as to why the Senate simply did not restore the original language to make the bill identical to the one passed by the house so it could go immediately to the governor? Despite what the NRA says now, the NRA opposes Open Carry. On June 16th at 3:30 PM you can watch… Read more »