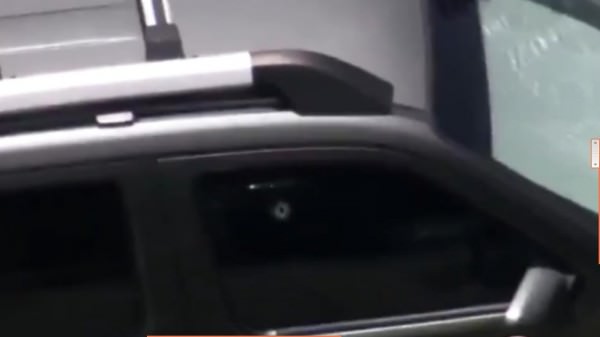 It appears that George Zimmerman, who has survived the violent attack by Treyvon Martin, survived the media persecution, survived the trial, had his marriage destroyed and a reward posted on his head for the temerity of surviving, has apparently survived an assassination attempt.   A bullet narrowly missed George Zimmerman’s head, leading to non-life threatening wounds.  The man who tried to kill him, seems to have thought he had succeeded.  From wesh.com:

Zimmerman’s attorney Don West said a bullet missed Zimmerman’s head, but he was sprayed with glass from his vehicle’s windshield and other debris.

West said Zimmerman has been released from the hospital.

Kenneth Cornell says that the shooter approached him:

Lake Mary Chief Steve Bracknell said Zimmerman did not shoot, but another person — an unidentified person Zimmerman knows — shot at him.

Police initially thought the shooting was a road-rage incident, but Bracknell said that might not be true.

The media are already trying to somehow blame George Zimmerman for the shooting.

George Zimmerman has to be one of the most reviled and maligned men in America.  His sin is that he defended his life at a time when the Obama administration was looking for an incident to inflame black voters.

For the best analysis of the Zimmerman trial, Massad Ayoob has done the best job.

The investigation into the shooting is ongoing.
Update: Conservativetreehouse is reporting that the shooter had stalked Zimmerman before.  They say he is  Matt Apperson:

Matt Apperson is the same guy who tried to gain fame in September of 2014 by claiming that George Zimmerman waved a gun at him during a road rage incident.  (Full backstory of their prior two encounters outlined HERE)

The Dailey Mail has found out these facts about Matthew Apperson:

According to a commenter at the washingtonpost.com:

It is a very busy road and dozens saw the events. They were interviewed last night on local (Channel 10) TV. According to them, Apperson was chasing Zimmerman, waving a gun and yelling out of the window of his car. Zimmerman was trying to flee. Zimmerman then made a U turn in an attempt to escape, but Apperson made a U Turn as well, drew up beside Zimmerman and fired into his car. Apperson is now facing the mandatory 20 years in prison and Zimmerman won’t be seeing him again until 2035.

The information about the incident was inconclusive, until multiple witnesses confirmed George Zimmerman’s version of events.  An assassination is ” to kill (someone, such as a famous or important person) usually for political reasons”  The definition seems to fit the attack on George Zimmerman rather well.

Nice story (I’ll bet a complete fabrication) you tell of Zimmerman. No back it up with some verifiable facts.

The worst part about this from here in Central FL is that he would never been tried at all but for the political situation at the time. In fact it took a special prosecutor to be assigned because the FL AG refused to try him so they had to bring in someone who was willing (and anxious). Now however be clear this guy is a perfect definition of a wannabie. He looks for trouble to get into in able to justify him pulling his weapon. Thinks that gun USE is Constitutional and attempts to use it at ANY whim at… Read more »

It kind of reminds me of the Gregory Peck movie “The Gunfighter”. Except Zimmerman never tried to get a reputation as anything, let alone a gunfighter, it was forced on him. That doesn’t stop all these wanna-bes from trying to be the one to take down Zimmerman, one way or another.