Wisconsin –-(Ammoland.com)- My copy of Franklin Horton's (www.ranklinhorton.com) new book Grace Under Fire arrived the day before my father was rushed off to the hospital in the middle of the night. I live an hour away and drove straight to the emergency room. I was packed and ready to go to the farm for the weekend, so I grabbed my bag, which had the Grace Under Fire book packed inside. This was a good thing because I did not get home for three days.

Grace Under Fire by Franklin Horton

I sat reading Mr. Horton's new book during the night in the ER as we waited to get my father a room on one of the floors upstairs in the hospital.

I must admit it was a little bit depressing and very much an eye-opener dealing with my 86 year old father's emergency health issues and reading a book about an apocalyptic break down of American society due to terrorist attacks on the US power grid.

The power was out all across the nation in the book, but what if the power was out in the hospital my father had just been rushed to? Yes, they had emergency back-up generators, but generators are only as good as the supply of fuel on hand. The reality is that the hospital my father was in could not reliability expect to get a re-supply of fuel if the whole world was crashing down.

Grace Under Fire is the second in a series of two (with hopes of more) books that deal with the crisis issue of a young college, female student studying hundreds of miles away from home at an out of state University when the terrorist attacks occur. Grace, the main character has to fight her way home in Mr. Horton's first book called Locker Nine.

You do not have to read Locker Nine to understand the continuing story in Grace Under Fire, but I strongly suggest you read both. In fact, after you read Locker Nine you need to buy multiple copies to send to friends and family members who are living as young adults away from home, such as in college. Grace Under Fire will grab your attention from the first chapters and greatly disturb your idea of how safe you believe your family members will be if they have to live in a crisis, outside the false concept of their safety in your home.

Safe is a word that does not play well in either of Mr. Horton's books. Mr. Horton has a total of seven books out that follow the same terrorist attack and nationwide power outage. No one is safe. All the characters in Mr. Horton's books must deal with destruction and the presence of evil when man is involved.

The premise of Mr. Horton's books is a reverse angle of dealing with a major crisis. Most apocalyptic genre books center around the actions of leaving or bugging out from a location in the event of a disaster.

Franklin Horton asked the question, “what if you are not at home when the crisis occurs?” What if you are hundreds of miles from home on a business trip or away at college?

It is a natural, built-in instinct to want to return to the safety of home and family when the world is falling down around you. If you are hundreds of miles from home how do you “bug home” and survive the journey? Did you take your bug-out bag with you when you left home, just in case you may have to bug-home?

Do you have food and water? Do you have emergency supplies? Are you armed with a firearm and are you prepared to use it to survive? Do you have a Milwaukee Nail & Waukesha Spike? These are the question Mr. Horton deals with in-depth in his books.

I have a daughter in college, and as soon as I finished Locker Nine, I sent the book to her with instructions to read it sooner than later. Grace Under Fire is the continuation of the Locker Nine storyline but it is by no means the conclusion or a happy ending for Grace and her family.

I am not sure there can ever be a happy ending in this scenario.

According to some Home Land Security predictions, if the US has a total electric power outage and fails to get the electricity back online, only one in every ten people in North America will still be alive in a year. Our society is so dependent on electricity that we can hardly accomplish the most basic tasks of minimum survivability without power. 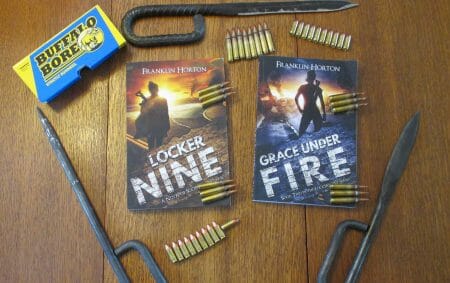 So, as I sat in my father's hospital room I wondered just how I was going to handle trying to survive a major power outage in the middle of the Wisconsin winter while trying to get my geriatric parents to my home safely, so we could then bug out to the farm. Doing all this, knowing I was going to have to brave the highways full of other scared and more importantly unprepared people who just want to get away from danger and be the danger.

The reality is, if the electrical grid goes down nationwide or just in a multiple state area, lots of scared people will head in all directions thinking they are running to safety.

There will be no safety, just small pockets of less danger and somewhat managed crisis.

Grace Under Fire is the latest of Mr. Horton's books. Anyone of his books can stand alone as both an excellent read for entertainment and as a training manual on how to try and get ready for the crisis that will inevitably come your way.

Your best bet is to read all of his books. His attention to detail on the little things in life that we take for granted that disappear as soon as the power goes out helps prepare the reader to think of their own real-world safety.

You cannot survive alone in a major crisis. Mr. Horton's book, while fiction, will enlighten you on what can go wrong and how you can prepare. They are also a great entertaining read.

Just do not buy the books and then start reading them after the electric grid goes down. Good reading entertainment means nothing if you will not survive the day to read the last chapter.

About Major Van Harl USAF Ret.: Major Van E. Harl USAF Ret., a career Police Officer in the U.S. Air Force, was born in Burlington, Iowa, USA, in 1955. He was the Deputy Chief of police at two Air Force Bases and the Commander of Law Enforcement Operations at another. He is a graduate of the U.S. Army Infantry School.  A retired Colorado Ranger and currently is an Auxiliary Police Officer with the Cudahy PD in Milwaukee County, WI.  His efforts now are directed at church campus safely and security training.  He believes “evil hates organization.”  [email protected]

There is a similar book by William Forstchen – titlied – “One Second After” – which details a similar loss of the grid due to an EMP strike. Very chilling prospect.

@Sam, Marvelous series by Forstchen. Many good hints on what to do, without reading like a FM.
@Matt in Ok, You have excellent taste in literature!

Mr Horton’s other series are very good as well. I will have to check these out as the cold sets in. So far I’ve read his Borrowed World, Ashes of the unspeakable and Legion of Despair