U.S.A. –-(Ammoland.com)- Two of the hottest trends in the firearm industry right now are pistol caliber carbines and firearms chambered in 10mm and Hi-Point firearms have merged those two with the release of their 10mm carbines named the 1095TS and 1095TS Edge.

As for the pistol caliber carbine (PCC), its one of those firearm types that people either love or hate. Outside of going to the range, most of the time if I grab a carbine or a rifle, I want it in a rifle caliber. It's not 1876, any more and I don't necessarily feel the need to carry a handgun and rifle in the same caliber. I'm not 300 miles off the Oregon Trail shooting it out with banditos and rustlers. My supply chain isn't 30 days out and rifle calibers pack a lot more punch these days.

Then, that other side of me says, maybe I need something a little quieter out of a long gun or maybe I am shooting in an area where a full sized rifle cartridge is overkill or stray shots may be a danger within its effective range. I don't want to drop down to a 9mm in power levels, but don't care to step up to 45-70 either.

Hi-Point’s 10mm Carbine seems to fill that niche and it may have potential for hunters in certain states restricted to straight-wall cartridges for hunting.

We Got the Edge

MKS Supply sent us a carbine chambered in 10mm finished in a hydro-dipped Real Tree Edge Camo scheme. We wanted to give this carbine a good work out.

The camo paint job may be more of a hunting scheme than a military tactical one, but it seems more fitting on a 10mm carbine that could see use as a hunting rifle.

We were a bit apprehensive at the thought of a blowback operated 10mm. However, hefting this rifle gave us the feeling of more substantial construction than any previous Hi-Point carbine we have ever tested. There is a recoil buffer inside the stock that is said to aid in recoil reduction and a padded cheek rest.

Other features were familiar to us from past reviews of Hi-Point carbines. The factory sights are adjustable and robust. The top rail allows the mounting of optics but most importantly for us there is a threaded barrel on this one.

Some folks may want to add a muzzle brake here we decided to try a pistol silencer and a call to SilencerShop.com got a Dead Air Ghost 45M can in our hands.

The other major upgrade we noticed was a true Picatinny rail system instead of the Weaver that they used in the past.

If you take a good look at a modular suppressor like Dead Air’s Ghost M, you will see it as at least two silencers in one. Primarily because you can change the overall length: It can be run long or short.

That’s only half of the story, though. This silencer is full auto rated and can be used across multiple hosts other than as a .45 ACP muffler. It can handle 9mm, .40 S&W , 10mm, 300 blackout Subsonic, or even .22 long rifle.

According to Silencer Shop, the Dead Air Ghost M is “…full auto rated and features a unique patent-pending modular design. Break it down to the short configuration and you have the smallest and quietest .45 can in its class. When it’s time to be scary quiet, the Long configuration is the way to go.”

The Ghost is constructed of a combination of 17-4 stainless steel, titanium, and anodized 7075 aluminum. We were able to break ours down and reassemble it by hand without tools, although a spanner to remove the front end cap is included.

So we tried it on the Hi-Point 10mm carbine.

We were sure the extra boost from the can would bump up the felt recoil, but in both configurations, it was not only quiet but just as soft shooting as it was unsuppressed.

Much of that has to do with the 16” barrel, but both versions sounded the same on the noise level.

We had half a case of SIG Sauer 10mm ammunition sitting in the garage so we pulled a few boxes of 180-grain Elite Performance FMJ.

According to our chronograph, we were averaging 1484 fps. This is comparable to the ballistics of a 6-8″ 41 or 44 Magnum revolver. The 10-round single stack magazines functioned flawlessly At 50 yards we were getting one-hole groups with iron sights. We found the sights quick and easy to pick up.

The only real issue we found was with the magazine. That is not to say that it did not function flawlessly or aftermarket magazines are too expensive, but it's a single stack. This is one carbine where we would really like to see designed to accept double stack 10mm Glock magazines. We have a pair of dedicated 10mm Glocks and if we were to go to the field with this carbine, we would like 15 rounds of 10mm in the same magazine for our sidearm to fit it.

However, I get it. It's their company and their rules and with the low cost of their magazines, not to mention this rifle, 10mm shooters can afford them easily.

Shooters looking for a good quality and highly reliable carbine for a reasonable price in 10mm will find a lot to like about this model.

We like it enough that we are thinking about buying one. This time out Hi-Point seems to have outdone themselves with a very solid feeling carbine in a potent caliber. If you get a chance to see them side by side with a carbine in 9mm, 40S&W 45 ACP or even their 380; those rifles seem worlds apart in construction.

If the camo finish is not your thing, Hi-Point offers it in basic black as well. 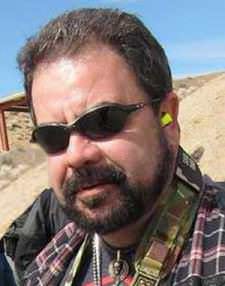 Get rid of the ghost ring sight.

The only thing that gets me, is wondering why the hell Hi-Point Arms won’t listen to what we want. It would only mean more sales for them. This should have been made to be compatible with Glock, double stack mags.

Hope I can buy one in a year or two. I have a 10 mm Glock (model 40) that shoots like a rifle & was thinking about buying another 10 mm pistol (Sig Sauer or EAA), but this video make the Hi Point 10 mm carbine look impressive & worth buying. My wife has informed me she will be buying me another 22 handgun for Christmas & I don’t want to confuse her by saying I would rather have a 10 mm carbine. She keeps telling me that I have too many guns! Is that possible? Nice article. F. Carlton… Read more »

Excellent article!!. I think while the “frontline” weapon manufacturers make excellent firearms, I think too often people associate price with quality and reliability. What Hi- Point has done, is rattled the firearms market; and therefore stirred the pot, proving that you don’t have to purchase a big name fire to get a good one. People are very prone to follow fads and trends, and hence the talk-down on Hi-Point. I’m am sure Hi-Point would continue to increase it’s offerings. And as a side note, I would much rather engage someone with a sense of superiority because of what they carry… Read more »

The author mentions felt recoil comared to supressed out of a 16 inch barrel yet it is 17.5 in the specs. I have the 4595TS and have handled and am buying the 1095TS. Unless you put it on a scale…..its very similar. Also fit and finish on a recent 4595 is of decent quality. Im not a Hi point fan boy but Im not a gun snob either, I own A few Sigs, Glocks and many other firearms and my hats off to Hi Point for filling a niche in the gun market.

After looking at too many AR-15s, the buttstock on this carbine looks like someone melted the joint and it sagged.

Hi Point missed the mark not making it compatible with the Glock magazine. You can bet it was intentional. Sell some now then sell more later. And I will buy both renditions.

I think the author mentions this one feels heftier than other Hi-Point carbines–I have the 9mm and got to try the 10 at SHOT–same gun less the hole through the barrel and threads for a can. All their stuff is way over built, yet way lower in price. I think the gun is hydro dipped not painted–author mentions both. That 10 out of that carbine is a true hard hitting flat shooting round. A good article!

Connecticut banned Hi-Point carbines. It’s considered an assault weapon. But Connecticut drivers licenses are given out like candy to illegals.

Would you rather have them driving without any training?

Who says that they get training?

Only if they drove back to their home country.

you cant move to mass or NY either your stuck in the middle, things are slowly starting to go bad in Maine to because of all the lib voters in Portland and the coast. they all move up here from your area and bring their votes and views, we have to spit the state to survive

If Hi Point does move to a double stack mag I would definitely get one of these! Always wanted a 10mm, this would push me over, LOL.

Just me but I don’t think that recoil would be a issue with a 10mm in a heavy carbine, I can see having a suppressor maybe but a muzzle brake? I am used to shooting a 300WM in a light weight so recoil doesn’t bother me, Also I have both a 9mm and 45 in their carbines and love taking them to the range, both are very accurate and fun, put a CP scope on both and have both the pistols, have had zero problems with any of them, got a 10mm on order and am wwaiting for Hi Point… Read more »