USA – -(AmmoLand.com)- There is sad news for the Pink Pistols. Doug Krick, known to his friends as “Krikket,” passed away last month. His mother, Anne Shutters Krick, announced on October 21st, 2108, that her son Doug had taken his own life. She blames depression as the reason for her son’s death.

Doug had overcome many obstacles, according to his mother. He had battled with alcoholism, had managed to lose a lot of weight, and managed to keep a job even during the difficult times. But it seems that depression took its toll, and Doug took his life.

“I have known Krikket since the late 80’s,” says Gwendolyn Patton, First Speaker Emeritus of the Pink Pistols and Operation Blazing Sword board member.

“I used to help run science fiction conventions with him. When Newsweek ran an article on the Pink Pistols in 2000, I saw he was one of the founders. I contacted him to congratulate him, and he invited me to start a chapter here in the Philadelphia area. The Delaware Valley chapter is still running to this day. Doug changed the course of my life, and the lives of countless others. He helped make us safer by encouraging us to take control of that safety personally, individually. We are diminished without him.”

His mother states on her Facebook page: “While the last few days have been unbearably hard and I never knew I had so many tears, there have also been lots of reasons to smile as we look back at happy memories and times spent with Doug.” His obituary asks that people make donations in place of flowers. It can be found at https://www.dupagecremations.com/obituary/Douglas-Lyle-Krick/Rosemont-IL/1819388

“I respected him and cared for him,” says Patton. “To me, he was ‘La Fondinto’, The Founder. I did my best to follow in his footsteps when he passed Pink Pistols to me, and I in my turn safeguarded Doug’s legacy the best I could, so his dream would continue. That’s my gift to Doug — that those he helped to safeguard will continue to be protected in the future.”

His obituary invites those who knew Doug “to join family and friends to celebrate Doug’s life and proclaim the victory of Christ over death at the memorial service on Saturday, November 3, 2018, at St. Paul’s Lutheran Church, 515 S. Wheaton Ave, Wheaton, IL 60187. There will be a visitation from 9-11am, service at 11 am, and a light luncheon will follow.”

“We are deeply saddened by the loss, please know that Doug is in our prayers. Doug was an innovator, breaking down barriers and an inspiration to the Second Amendment community. He will be deeply missed.” ~ Fredy Riehl, Editor, AmmoLand Shooting Sports News

The Pink Pistols mourns the passing of one of their Founders and will do their best to keep his memory and his legacy alive. 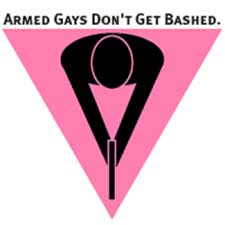 Pink Pistols, Inc. is dedicated to the legal, safe, and responsible use of firearms for self-defense of the sexual-minority community.

My heartfelt condolences to both the Krick family and friends, and the Pink Pistols organization. Suicide is SUCH a waste, especially for the depressed, because they mostly had no idea how greatly they were loved. Rest in Peace, Krikket. I never met you, but I bet I would have liked you.

Godspeed, Mr. Krick. I didn’t know you or ever met you, but I respect your mission of preserving the rights of often oppressed and bullied people. Your legacy will be long and remembered.

Pink Pistols is a crack in the liberal community’s monolithic anti-gun stand. Gun rights tie to minority rights to resist oppression. At the same time protection of minority gun rights help the rest of us. If gay gun owners can be disarmed, can we straight people be secure in our gun rights?

Mr. Krick was a defender of all our rights and deserves to be remembered with respect.