New York –-(Ammoland.com)- If New York Democrat Kevin Parker had his way, you would have to turn over your social media and search history to the authorities before your allowed to buy a gun. This requirement is to make sure the buyer isn’t a “violent” person.

The question is, would Parker be able to buy a gun because a search into his background shows he might be that same violent person.

Kevin Parker has a history of losing his cool and roughing up people so much so that the courts ordered him to seek anger management counseling.

The courts in the past have put Parker on a 3-year probation after being found guilty to 2 criminal mischief in the third-degree. The incident stems from a May 2009 confrontation with New York Post Photographer William Lopez.

Lopez was covering a story about Parker’s home facing foreclosure in his Brooklyn neighborhood. After Lopez took the picture and his flash went off Parker became enraged. He proceeded to chase down and attack Lopez by punching him. Parker then when onto breaking Lopez’s expensive camera and attacking Lopez’s car.

The police were called to the scene of the scuffle and arrested Parker on charges of felony and misdemeanor criminal mischief, assault and menacing. He was later also charged with attempted grand larceny. The damage Parker did to Lopez’s property was more than $1000.

Not only did Lopez lose property in the attack, but Lopez had to seek treatment at the hospital for cuts, bruises, and a broken finger. Parker was able to beat most of the charges by using the “politically motivative charges” defense.

Parker did end up having to pay $672 in restitution to the New York Post for damage to the camera. Parker also had to pay Lopez $1194 for the damage to the photog’s car. The courts also ordered Parker to stay away from Lopez.

Parker was facing prison if the jury would have convicted him on all the charges. He did lose his leadership position as majority whip and chair of the Energy Committee in the New York Senate.

This situation wasn’t the first time Parker had used his fist in anger. According to NBC New York at the time of the assault Parker had a reputation of resorting to the use of violence when angry.

In September of 2008 campaign aid Lucretia John accused Parker of pushing her causing her $300 glasses to be knocked off her face. John told police that Parker proceeded to stomp on the glasses. John then called the cops on Parker.

Parker confirmed to police that he did push John and crush her glasses below his feet, but insist that John started the fight. AmmoLand News could not determine why the police did not charge Parker.

Even before that incident, Parker had a violent reputation. In Parker was indicted on an assault charge and faced seven years in 2005 for punching a New York City traffic agent in the face. Parker escaped with a mandatory 6-month anger management class.

Parker’s anger might have to do with the amount of back taxes and unpaid utility bills he has racked up over the years.

Parker owed over $38,000 in unpaid property tax on two homes in New York City in 2017. When asked about the property tax bill by the New York Post last year Parker joked that he needed to a raise. He also

“I have a very large homeowner constituency. People understand what it’s like to struggle with property taxes, water bills and mortgages,” Parker told the New York Post. “Part of my electoral success is I live in the same circumstances as my constituents. I’m trying to pay my bills and taxes, like them.”

The majority of Parker’s constituency is not affluent. Most of the people that he represents do NOT own two homes within New York City. Most DO pay their water bills.

AmmoLand reached out to Kevin Parker for comment, but he chose not to respond. 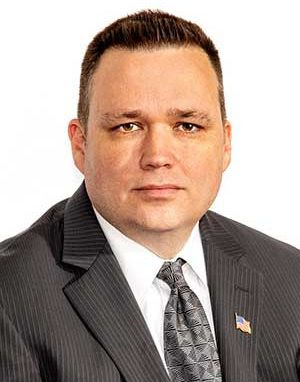 Why does any firearms manufacturer stay in the state of New York with all the antigun politicians trying to stop the citizens from purchasing guns.
The idiot in the article along with Cuomo, Bloomberg and the nutty mayor of NYC all would just as soon as see guns outlawed.

This article just demonstrates how CROOKED leftist politicians and courts can be when run by dimocraps. This jerk SHOULD have been convicted and JAILED numerous times and his property seized for unpaid taxes and water bills.
This is what the USA would look like under complete democrat control.

He takes after Rev. Al Sharpton who also has tax bills outstanding.

SSDD good for thee, but not for me ! Normal demonrat thought process. DEMS SUCK.

asshat got advise from Al Sharpton

Sadly, his background is already known but the voters still elected him.

Why is anyone surprised? This is typical of what the moron voters in this country put in office. You have to wonder if we wouldn’t be better off if an I.Q. test was mandatory in order to vote, with a minimum score of at least room temperature.

The founders of our nation had a pretty good list of requirements for the ability to vote.

The laws are meant for you, not me. Do as I say, not as I do. Thus ALWAYS will be the response of hypocritical political hacks!

Kevin Parker holds a doctoral degree in political science. This is your typical “you’re a racist because you’re white” kind of politician. His education, by liberals for liberals, is heavy in community action. Parker is a 16-year politician who is known by his peers as a violent tax evader who needs psychological help quipped Democrat Ruben Diaz. There is no greater need for term limits as right now.

Yeah classes in community organizing and Karl Marx’s philosophy will get you a doctorate at Liberal U. College is BS today.

There is a six letter word that would aptly describe him.

This politician is a douche nozzle, however I am curious to what that six letter word is?

roy,i could fill the screen up with names i’d like to call this POS,but i’ll take the high road.

come and get it, d-sucker

“Democrat politician is a criminal”

This is my surprised face…

yet STUPID democratliberals vote for him and his kind.knowing all this in advance,they still vote for him

EVERY TIME one of his kind gets into ANY political office, they ALWAYS end up in scandal. Either sex or money embezzlement, ALWAYS! most of the time, its both….

Did you mean” embezzlement”?