“According to a new poll, Andrew Yang is losing, as of today, to a guy called Eric Adams, who’s the Brooklyn Borough President,” Carlson explained, citing rising crime as the issue New Yorkers care most about, Adams understands, and “smug fussy liberals” have no real answers for.

“Eric Adams is actually serious about fighting crime,” Carlson elaborates. “How serious? He said if he becomes mayor he plans to carry his own gun.”

“Yes I will, number one. And number two, I won’t have a security detail. If the city’s safe, the mayor shouldn’t have a security detail with him. He should be walking the street by himself. Number three, the hypocrisy of those who are citywide officials who said you shouldn’t have guns in church, those guys that walk in with them – they got guns.”

“Eric Adams later suggested he might have been joking,” Carlson admitted. “But as you just read, he wasn’t joking. He obviously meant that. And normal voters appreciated it. Why wouldn’t they?”

I have a reason why. How about because Adams won’t allow them to do the same thing, and they’re the people most at risk of being victimized by those who ignore citizen disarmament edicts?

Not only do New Yorkers need to jump through bureaucratic hoops and pay fees just to own a gun, but they can also forget about carrying one unless they’re elite and politically connected rich people, celebrities, or, like Adams, one of the “Only Ones.” And good luck getting a refund if your application is turned down.

It’s more than hypocritical that Adams has his gun but he demands citizen disarmament, not just for New York City, but for the rest of the country as well.

“In partnership with Council Member Brad Lander and other community leaders, I invite all students, educators, and allies across New York City to stand up and speak out against gun violence at the March for Our Lives National School Walkout Rally,” Adams declared after the Parkland murders where the on-scene armed “school resource officer” holed up for his own safety while those he was paid to protect were being slaughtered. “At this after-school rally, we will call and write legislators, learn how to speak truth to power, and build a Students’ Bill of Rights.”

That means Adams supports the Orwellian-named “Peace Plan for a Safer America” and all of the infringements and citizen disarmament measures it demands. It also means, if he thinks a “Students’ Bill” is something that men can legitimately create and bestow, that he doesn’t have a clue as to what unalienable rights really are, or what the Constitution requires of those who swear an oath to uphold it.

This is the flyer Adams included with his invitation to skip school: 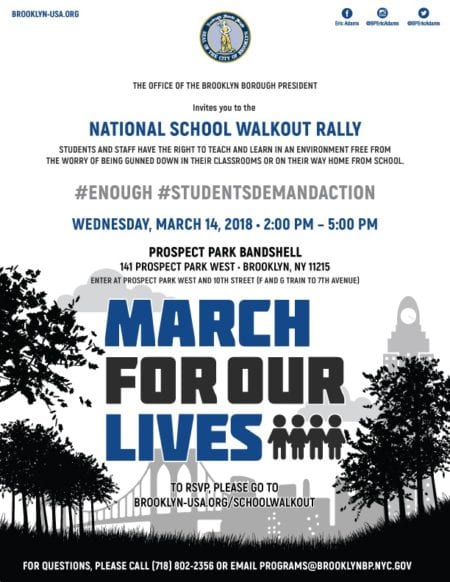 In fairness, Tucker Carlson is on the mark much of the time, and he didn’t so much endorse Adams as point out the difference between him and wannabe rulers like Bill de Blasio and Yang (albeit with too much gushing for my way of thinking). So I’m not going to sour on the guy over just this. That said, Fox News and Carlson’s team have the resources to check out a politician’s gun stances and you’d think if they were doing a story about it, they’d have done a thorough job.

In reality, whoever gets elected is going to suck on guns — it’s not like Yang’s a pal. But it’s awful hard to sympathize with an idiot electorate that continuously votes to keep itself disarmed, especially when its choices, particularly for higher offices, drag down the rest of us.

I looked up this guy and this is how hard it was for me to see that I wouldn’t vote for him. It said

Yes, guns for him but none for others.

A gun for he but not for thee.

Unfortunately I could never believe a “D” they are all about do as I say not as I do…..Protect me but not YOU. I don’t even believe half the “R”‘s …..Romney, Chaney, Murkowski, McCain…..etc!

did you notice all the police officers he had around him during that mtv interview? can you say hypocrite. i like tucker, but am sad that he did not do his due diligence for this one in investigating this guy. there are too many sheeple in nyc that will just believe what these corrupt, hypocritical politicians tell them and vote another dumbocrat into office. just look at the past to see how elections and crime go together. even the new purchasers of firearms might be persuaded to support him because of what he said and what he looks like, not… Read more »

Since the passing of the Sullivan Law, in 1911, the establishing of the Firearms Control Board, in 1967 and a phalanx of obstacles put in the way of civilians legally acquiring arms, with hardly an objection from elected politicians, or more than just a handful of residents,it’s fair to say: NYC will never be receptive to gun rights.

Last edited 1 year ago by Wass
4

Rather than repeat the obvious critiques about Eric Adams, I want to call out all the people standing around the candidate who have “apparently” not been vaccinated. That’s a sign right there of why they keep voting to disarm themselves.

Masks are a sign of submission the big brother.

In the second last paragraph of his article, David zeroes in on the crux of the matter with Carlson’s discussion of Eric Adams’ NYC Mayoral bid: “In fairness, Tucker Carlson is on the mark much of the time, and he didn’t so much endorse Adams as point out the difference between him and wannabe rulers like Bill de Blasio and Yang (albeit with too much gushing for my way of thinking). So I’m not going to sour on the guy over just this. That said, Fox News and Carlson’s team have the resources to check out a politician’s gun stances and you’d… Read more »

Harold disagrees with you, David. He criticized THIS column.

And with all of us.

No corporate media is on “our” side. Fox News has always been the controlled opposition, just like the rest have controlled the main “progressive” narrative. These entities are only there to control opinion and thought. Tucker is paid a lot of money so dupes that are “conservative” will have their thoughts contained and steered.

Stop expecting otherwise. You want a source for info? Stub your toe. You’ll quickly experience a valid source for what is happening. All the rest can and will mislead you. Stop pretending otherwise.

“Tucker Carlson is on the mark much of the time.”

You could tell he had fun shooting at his range and was quite honored as I think any one of us would be. He is one of the reasons I bought a Hellcat.

If a candidate is a Democrat, be prepared to be disappointed.

January 14, 2013 S2230 Senate Vote on passage of the New York State SAFE Act: Eric Adams “Aye”.
Adams might be the best of the “evils” really just casting a vote against the others; but hopefully someone steps up that the people can vote for.

NYC is a lost cause, as is California and the entire left coast and Chicago. I couldn’t care less what happens in any of those places; the people there deserve what they have and it is what they get for allowing their “homes” to become cesspools and stay that way.