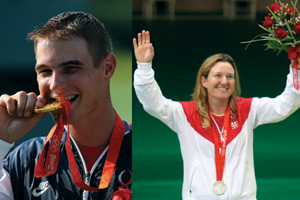 These athletes were chosen based on the USAS Athlete of the Year Policies and Procedures and were selected by a points system.

Three-time Olympian Eller, a member of the U.S. Army Marksmanship Unit (USAMU), claimed the first Olympic medal of his career when he captured the Men’s Double Trap gold in Beijing this past August. He also claimed the silver medal at the Beijing World Cup in April, which served as the test event for the Olympic Games and placed fourth at both World Cup Kerrville and World Cup Suhl.

Nationally, Eller finished in first place overall at the 2008 U.S. Olympic Team Trials for Shotgun and also claimed the top spots at the Shotgun National Championships and Shotgun Fall Selection Match, landing himself a spot on the 2009 World Shotgun Championship team.

Four-time Olympian Rhode, who was also the 2007 USAS Female Athlete of the year, captured her fourth career Olympic medal in Beijing when she brought home the silver in Women’s Skeet.

Rhode won the Women’s Skeet event at the 2008 U.S. Olympic Team Trials and was also the 2008 National Champion. Rhode finished in second place at the Shotgun Fall Selection Match, claiming a spot on the 2009 World Shotgun Championship team.

Two-time Olympian Emmons, who is the 2004 Olympic gold medalist in Men’s 50m Prone Rifle, grabbed the silver in prone at the 2008 Olympic Games in Beijing and finished in fourth place in Men’s 50m 3 Position Rifle. He won a silver medal in Men’s 10m Air Rifle at the 2008 Beijing World Cup and claimed a bronze in prone at World Cup Milan.

At the 2008 ISSF Rifle/Pistol World Cup Final in Bangkok, Thailand, Emmons captured a gold medal in men’s 3 position as well as silver in both air and prone, which is the first time a U.S. shooter has earned three medals at a World Cup Final. Emmons also earned the national title in all three events at the 2008 USA Shooting National Championships.

Beyerle finished fourth at the 2008 Olympic Games in Women’s 10m Air Rifle and fifth in Women’s 50m 3 Position Rifle. She was the World Cup Milan silver medalist in 3 position and finished fifth at the World Cup Final. Beyerle won the 2008 U.S. Olympic Team Trials for Smallbore and was also the 2008 National Champion in women’s 3 position. She finished second at nationals in air rifle.

The overall athletes of the year will be submitted to the U.S. Olympic Committee for consideration for the 2008 USOC SportsMan and Sports Women of the Year awards, which have been presented annually since 1974 to the top overall male and female athletes within the U.S. Olympic Family.