EVEN A FART HAS BENEFITS By Tom McHale

Even a fart has benefits!

In fact, it’s hard to imagine something that has no benefit whatsoever.

Mosquitos? Yeah, they’re part of the food chain and they keep the OFF! Deep Woods people employed. Former Congressman Anthony Weiner? Why he singlehandedly made Twitter interesting for at least a month. And apparently he’s going to be the gift that keeps on giving now that he wants to run for Mayor of New York. 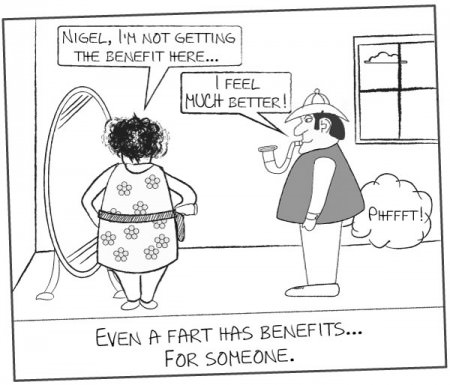 For the past several weeks, the hysteria over gun control has exceeded that of the first nine rows of floor seats at a Justin Bieber concert. And its only going to get worse as Congress has (at least temporarily) shelved Hypocrite of Epic Proportion Feinstein’s new gun and magazine ban legislation.

You’ll continue to hear “common sense” arguments, mostly from Piers Morgan, but also from some of the other Mouseketeers on NBC, CBS, ABC, FOX, and CNN.

What you won’t hear, however, is the other side of these “common sense” arguments. After all, someone smart and famous, like New Boy King Bloomberg once said something like “every action has a reaction.” Or maybe it was Bill Nye the Science Guy. In any case, things tend to have two sides. Arguments, decisions, discussions, 45 single records and of course, politicians.

In other words, every decision has pros and cons to consider. Drawbacks and benefits.

LIke a 45 record (for those of you younger folks, 45 records are kind of like harpsichords) every “common sense” gun control talking point has two sides.

Side A: If a gun control measure can save just one life, isn’t it worth it?

Side B: What if some measure saves one life, but results in thousands more being lost? Oh never mind, that’s not a “what if” question. Somewhere north of one million people per year use guns to protect themselves from a violent crime.

Side B: Yeah, but most of them were bad. In fact, numerous studies find that upwards of 75% of gun related murder victims have previous criminal records. Perhaps that ought to be factored into the debate? You can also factor in the previous discussion point here. How many people were saved by using a gun last year?

Side A: Guns only have one purpose! To kill people!

Side B: Seriously? Well it’s good to know that police carry guns for the sole purpose of killing people! Obviously this is not the case. But just for discussion’s sake, let’s suppose that’s true. Isn’t it intellectually dishonest to assume that a gun’s only purpose if to kill innocent people? Do you NOT consider the scenario of a gun killing someone who is trying to kill an innocent person?

Side A: You want teachers to be able to carry a guns? What if one goes off???

Side B: Guess what? When teachers with concealed carry permits are disarmed at the front door, bad things DO happen. Can we have a rational discussion that considers evidence of “accidents” or concealed carry permitees suddenly going crazy, ( it is almost a statistical impossiblity ) versus documented uses that stop violent attacks?

We could go on all day about gun control arguments. The important thing is to insist on considering all sides of an issue before forming opinion, and especially policy.

Because everything has at least one benefit.

About: Tom McHale describes himself as a conservative gun-totin’ bible-clingin’ literary assault dude who enjoys finding humor in just about anything. He has started a new book series project – Insanely Practical Guides – to help make sense of all that complicated shooting stuff. Learn more at insanelypracticalguides.com

His web blog My Gun Culture is an irreverent, twisted look at gun news bordering on the ridiculous. It covers shootin’ stuff, loud noises, defending your own, the occasional mall ninja, and about 200 years of the American way. These are the (partially) true stories of My Gun Culture says Tom. Visit: www.mygunculture.com