Arizona – -(Ammoland.com)- The Hi-Point carbine shown comes with 10 round magazines. It is inappropriately described as an “assault rifle” in the Daily Mail article. It is a good choice for home defense because it is short and easy to handle, has little recoil or muzzle flash, and takes much less practice for the average person to use accurately than does a handgun. From the dailymail.co.uk:

This is the dramatic moment a mother-of-two opened fire with an assault rifle on intruders who tried to smash their way into her home.

The woman took action after three hooded individuals kicked down the door of her Detroit home on Monday night where she lives with her two young children.

She fired off rounds in a bid to deter the would-be burglars, later saying she ‘didn’t have time to get scared’.

I do not expect the Daily Mail to have a gun expert on hand (hint: I am available for very reasonable rates), but to call a Hi-Point carbine an “assault rifle” is a bit over the top, even if it fits the elastic legal definition of “assault weapon”  in some state law, based on cosmetic features.  On the plus side, I give them credit for carrying the story without ever saying that the mother and her children would have been better off without a gun.  They get additional points for mentioning a case where a Brooklyn boy of 10 drove off home invaders by picking up a pistol that they dropped and firing it at them.

To add to any controversy, this appears to be another case of successful use of “warning shots”.

As the intruders fled the home while shots rang out, one dropped a handgun. He grabbed it and tried to get back into the house but was scared off by more shots.

I do not recommend “warning shots”, but there is no question that sometimes they are used with positive results. Consider the Korean grocers during the Rodney King riots, and these teenage criminals.   Unless, of course, the mother simply needs some time at the range.

“Barely qualifies as a rifle”? Tell that to the punks who ran like rabbits, after being shot at with one. How many times will that woman need to shoot at someone 300 yards away, in Detroit? She has what is(IMHO)an excellent “Personal Defense Weapon”, that well-suits her needs. FYI, it is a Hi-Point, not Highpoint, and I am quite pleased with my own 995TS. 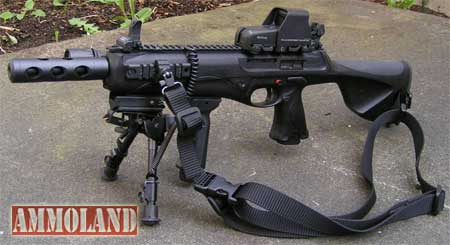 The Hi-Point carbine is ugly as heck and is a highly-effective firearm at an unreal low price. Damn things are incredibly robust and in the real world just do not need any maintenance. Pull trigger and they always work.

Were they really just warning shots or did mama bear simply miss the little monsters??!!! At least she ran them off and protected her children. Hopefully, they also learned the importance of self reliance and the means to defend ones home. As for the “assault rifle” nonsense, it doesn’t surprise me that they had to use the misleadimg term. However, the Highpoint carbine is chambered in handgun calibers and barely qualifies as a rifle at all. It is more like an elongated pistol.

Re-read the article, he says…

“It is inappropriately described as an “assault rifle”.

Well, it is sort of black in color, so by the standards of the misinformation lobby that calls itself the “media” that makes it an assault weapon. Black = Bad. It actually is a carbine, which happens to be a small rifle that fires pistol ammunition, not rifle ammunition. I believe that this is made by High Point, and probably a .45 caliber model, or a 9mm version which looks identical. This woman used this gun for it’s intended use, home defense, and it worked. I’m glad no one in her home was hurt by the intruders. The gun wielding… Read more »

ProMag makes a 14 Round magazine for the .45 cal HP carbine. 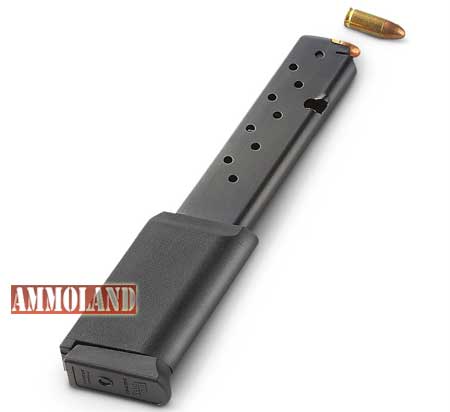 Mr. Weingarten,
No offense intended sir, but that is not an “Assault Rifle”, that is a “Defense Rifle”.

I might add to Jim’s comments that HI Point weapons are all Amerikan…made in USA. Good quality and I like the .45. Might remind the fella that talked about not knowing a .45 cal rifle…now you know.

It’s about the length of the .45 Thompson, but has the mag in the handle which I’m not crazy about, and the mag only holds 10 rounds. The carbine is based on the .45 pistol, action and such.

Dean, may I remind you that Arizona prohibits “warning shots” under Shannon’s Law? When we fire, we fire for effect.

This was in Detroit and we don’t call them warning shots, we call them suppression fire .. 🙂 They did suppress the gangsta wannabe’s desire to enter the home! Always remember when some moronic DA tries to prosecute a self defense victim that it only takes one juror to prevent a guilty verdict but it takes 12 to convict. Jurors cannot be punished for voting their conscience. The judge and prosecutor can threaten and tell you that you have to use their interpretation of the law but that is all they can do. They have no authority to do anything… Read more »

I really do wish the LSM would actually look up what the hell an actual “assault rifle” is. It is NOT a semi-auto carbine that looks like a military weapon. An “assault rifle” is a weapon that has selective fire. That means that you can either shoot 1 round at a time,3 – round bursts and fully automatic, like a machine gun. As long as you keep the trigger depressed, it will fire rounds until the magazine is empty. Biden, Obama, Feinstein, Pelosi, Oprah and the like apparently have no clue or don’t want to know. They just want our… Read more »

Hi Point saves the day! How cool is that?

Well the Joe Biden plan of home defence would not have worked well here for this MOM. A double barrel out the back door would have endangered her even more. Three perps at the back door, Moma gets a hi point too sweep em off. Way too go mom.