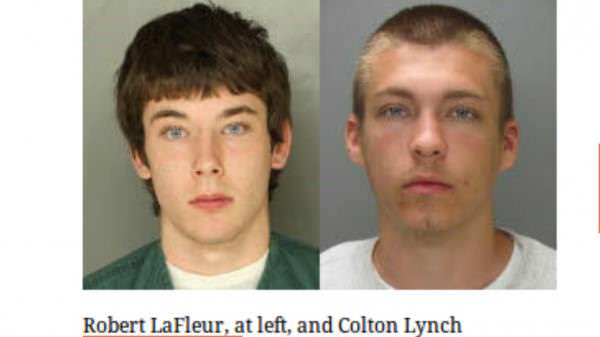 Arizona – -(Ammoland.com)-
In Lancaster County, PA, an alert and armed woman stopped a crime spree.  One of the things that destroys the sense of security in a neighborhood is  the proliferation of  burglaries and thefts of personal property from vehicles.  That is what the pair of suspects were involved in when an alert woman stopped Robert LaFleur from breaking into her car at 2:30 am and held him at gunpoint until the police arrived.

It seems unlikely that LaFleur would have obeyed the woman's commands if she had not been armed.   The police report that he resisted arrest when they arrived, and that they used a taser on him.  They then turned their attention on LaFleur's accomplice, who was in a vehicle.   The vehicle turned out to be stolen.  From lancasteronline.com:

The car turned out to have been recently stolen from Pine Street in Denver, Randolph said. Police recovered numerous electronic items from LaFleur, which also are believed to have been stolen.

LaFleur and Lynch admitted to police they entered numerous vehicles in the areas of Misty Lane, Creek Lane and Meadow View Drive in Ephrata, and Pine and Main streets in Denver, according to criminal complaints. They also admitted stealing the car, according to the complaints.

Would the police have arrested LaFluer and Lynch if the armed woman had not stopped the series of crimes in progress?  Probably.  Eventually.  Most criminals are arrested, eventually.   But they commit dozens or hundreds of crimes before they are arrested, and often dozens or hundreds more while they are out on bond and not incarcerated, adversely influencing hundreds of people.  It only takes a small number of criminals to create an enormous amount of crime.

We do not know the number that “numerous” refers to in the paragraph quoted from lancasteronline.   We do know that it is likely that most of the victims in this case will recover their property.

One of the advantages of an armed population is that it turns passive victims into active participants in policing the community.  A government that trusts its people with the possession of arms also shows that it is worthy of trust, to paraphrase Machiavelli.  The iconic political philosopher famously wrote:

When you disarm [the people] you commence to offend them and show that you distrust them either through cowardice or lack of confidence, and both of these opinions generate hatred against you. – Niccoló Machiavelli, The Prince. 1537.

A commenter at the site claims that Colton James Lynch is the brother of Morning Star Lynch, who was recently sentenced to life imprisonment for the murder of a mentally disabled woman in Lancaster County.  That Lynch had a record for theft and robbery before he participated in the murder.   He claims that he does not know why he and his companion murdered the woman, who they both knew.  The two Lynchs are both listed as 21 years old; perhaps an alert reader can inform us as to whether there is a familial connection or not.

Theft and murder are symptoms of the same disregard for other people.   Property costs time taken from your life; participating in a criminal case costs more time.  Time is one thing that you never regain; once used, it is gone forever.
c2014 by Dean Weingarten: Permission to share is granted when this notice is included. Link to Gun Watch

Nice to get some of these no good brats that think stealing is ok. Well its not, hopefully the Judge in their case is a mean one that has been robbed and gives them the max sentenence allowed.

Wishful thinking Eric. I hope you are right, but I bet the little Bastards will get a slap on the wrist and let go.

Not even close I’m out and free walking around doing what I want. The difference between you and myself is i know what i am. Have you ever stole anything no matter how small? Check your own backyard before you complain Eric.