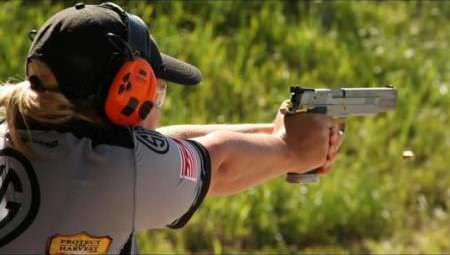 Using a SIG SAUER® X-Six™ Scandic, Rushing took the High Lady title with a comfortable 70-point margin over the runner-up. Her 1599 score, with 68 “X’s,” was also good for an overall second place in the Marksman Metallic class.

“It was an honor to compete at the Bianchi Cup, one of the most prestigious pistol matches in the world, with my teammates,” Rushing said. “Competing with so many top performing shooters certainly creates intense match pressure, and I tried to maintain my focus on process rather than outcome throughout the match.”

As a member of Team SIG, Rushing is part of the team’s strong NRA Action Pistol component, which includes former Bianchi Cup champion Bruce Gray, who finished sixth in Production Division in his first year back after an absence from the match.

“I am very proud to have won the Women’s Metallic Championship, but am already revising my training for next year with the help of Team Manager Bruce Gray, with the hopes of an even stronger performance in 2016,” she said.

Team SIG is made up of 25+ competitors covering a variety of shooting sports and skill levels. Led by Team Captain and World Champion Max Michel, Jr., Team SIG will showcase the versatility, performance and durability of the SIG SAUER® P320® modular handgun, in addition to other SIG SAUER products.

With a focus on visibility and approachability, Team SIG provides competitive shooters of all skill levels with education, advice and exercises to improve on the competition range as well as promoting overall firearm safety.

SIG SAUER, Inc. is a New Hampshire-based weapons systems provider leading the industry in American innovation, ingenuity, and manufacturing. SIG SAUER® brings a dedication to superior quality, ultimate reliability, and unmatched performance that has made it the brand of choice among responsible citizens, and many of the world’s most elite military, government, and law enforcement units. As a complete systems provider, SIG SAUER offers a full array of products to meet any mission parameter, from handguns and rifles to silencers, optics, ammunition, accessories, and airguns. The largest member of a worldwide business group of firearms manufacturers that includes SIG SAUER GmbH & Co. KG in Germany and Swiss Arms AG in Switzerland, SIG SAUER is an ISO 9001: 2008 certified company with more than 900 employees. For more information on SIG SAUER, any of its products, or the SIG SAUER AcademySM, log on to www.sigsauer.com.