By Dean Weingarten
Looking for more info on tactical shotgun ammo? You should like our review of the best 12 gauge self defense ammo.

A major controversy during the NRA Annual Meeting was the regulatory box the ATF had constructed for themselves with regulatory letters and the law.

I was surprised to learn that firearms that fired shotgun shells with a bore of more than .5 inches, and a barrel length less than 18 inches, could legally be purchased and possessed without all the complex regulatory burden and $200 tax required by the National Firearms Act, the Gun Control Act of 1968, and all the following changes.

The firearm pictured above is based on the Model 500 series.  At the Shockwave Technologies site, there is considerable discussion about ordering a 14″ front end to use to build a legal (non NFA)  firearm with a barrel less than 18 inches.

Shockwave Technologies has a copy of the ATF letter from July 20th, 2010, in which they clarify that barrel length is not the determining factor for shotguns without shoulder stocks.

I made some more inquires. I found a credible source, who wishes to remain anonymous, that said that Mossberg had stopped shipping the 14″ front ends that are used in the Shockwave configuration. This intrigued me, as rumors at the NRA meeting were that the manufacture of such guns was part of the box that the ATF found themselves in. The timing was about right for the NRA meeting controversy.

I contacted Mossberg directly, and asked for clarification. I asked if Mossberg had stopped shipping 14″ front ends, and if the ATF had contacted them. Here is the question that I asked:

I have learned that Mossberg decided to stop shipment of 14″ front ends for the model 500 shotgun in the last few weeks.
I would like to know what the reason was for the decision, and if Mossberg was contacted by the ATF prior to the decision.

Here is the reply from Mossberg, via email: 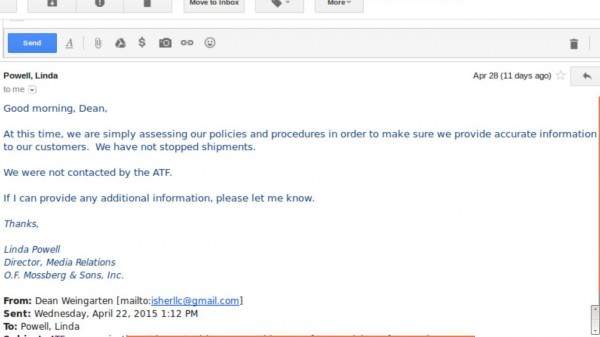 What policies and procedures were being assessed is not stated.

It is understandable that Mossberg wants to be very careful in this situation. I am sure that they remember the backlash from the gun culture that changed the ownership of Smith & Wesson, and cost Ruger millions in revenue when they were perceived to be colluding with the government on restrictive federal laws. Those events happened during the Clinton administration.

Meanwhile, another company is producing 12 ga “firearms” that are relatively small. Black Aces Tactical is offering this model. It is covered by the ATF letter, and is classified as simply a “firearm”. Black Aces Tactical makes their own receivers and magazines. The barrel here is only 8.5 inches long. 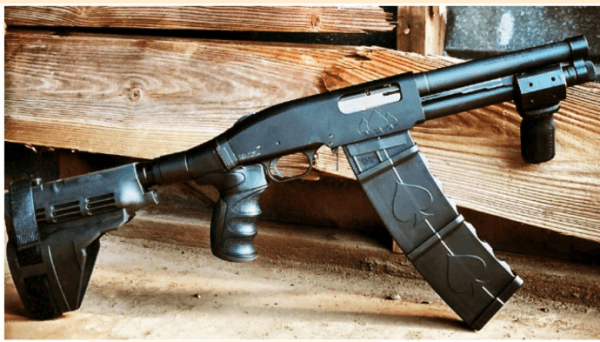 Notice that it uses a Sig arm brace (not a stock) and receiver extension to make the ATF length requirement of more than 26 inches. The 10 round detachable magazine is quite interesting. H/T to Guns.com.  Another model has the same receiver extension, except that the extension folds.

These short guns firing shotgun shells have obvious self defense applications. There is no reason why these guns should be treated any different than ordinary pistols. Functionally, they are either large pistols or small shotguns. Both shotguns and pistols are constitutionally protected by the Heller and McDonald decisions. There is no valid reason for treating these firearms any differently than other shotguns or pistols.

Except for the legacy issues created by the NFA, GCA1968, FOPA and the various BATFE letter rulings. Those are what puts the ATF in a box, and why they are reported to be sweating.. dare I say it.. bullets.

David Hardy sums it up well:

Every shotgun but the diminutive .410 has a bore greater than half an inch. The “sporting purpose” exemption doesn't apply, since that is limited to shotguns, and as we have seen, these firearms are not “shotguns” under the definitions of the NFA.

The situation as it stands is thus: BATF must never have realized that these firearms are NFA “destructive devices,” and as a result thousands, if not millions, are in private possession of persons who bought them legitimately over the counter, with no reason to suspect that there was anything legally amiss.

The mere pictures of the above firearms show how arcane and irrational national firearms law has become. There are people in jail for possession of firearms that are no different, functionally, from what the ATF has ruled do not require $200 taxes and do not fall under the NFA.

The ATF is facing multiple federal lawsuits relating to the manufacture of muzzle brakes and machine guns.   Any one of these lawsuits is likely to be granted discovery of all the ATF regulatory letters.  At last report, in the late 1990's, there were over 300 cubic feet of them. Those will reveal a web of contradictions, that are not allowed under the Constitution with the Heller and McDonald decisions.

There is no rational reason why the Black Aces 12 gauge is legal, but a full stocked .22 single shot rifle with a 15 inch barrel requires a $200 tax stamp and the full, draconian provisions of the NFA.

The usual sequence is that when small manufacturers find a profitable market, large manufactures start production of their own models to take advantage of it. I will be watching to see if Mossberg or other large firms start offering pistol grip 12 gauge firearms of similar configurations.

It is an interesting time, and I believe the end result will be reform of federal gun laws, to something far more rational and less burdensome than now exists.

Thanks for the info. Curious to know if a dealer has so.easy of the 14″ Moss berg with no button stock ever, can they be removed from his NFA list of items and then add a pistol grip to make the 26″ + limit. Assuming he has an 07 license

The ATF has always held that these ‘regulatory letters’ are little more than the opinion of the local field office that issues them and the ATF Director has the discretion of changing that opinion on a whim. In short, they aren’t worth the paper they’re written on. I think the issue is popularity. When only a few folks have some gizmo, the ATF doesn’t consider it a threat worth their time. But when that gadget becomes too popular and it’s seen as an easily exploitable loophole by the general public the ATF acts to shut it down. At some point… Read more »