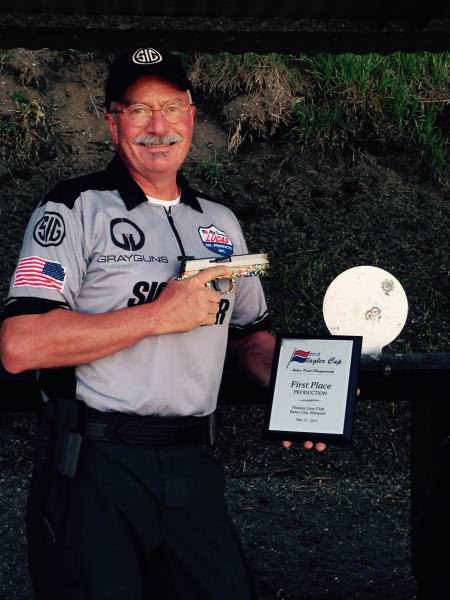 In a tune-up for this week’s Bianchi Cup match, Team Manager Bruce Gray took home top Production Division honors from the Flagler Cup. This lead-up to one of the most prestigious events in shooting drew some top competitors and perennial favorites to win the Bianchi Cup.

“My game, NRA Action, demands the utmost in accuracy and shootability from a Production pistol,” Gray said. “My P320 literally makes it simple. It does anything I want it to flawlessly and asks for more.”

“The P320 performed superbly. Its superior accuracy and reliability, as well as its fast cyclic rate, allowed me to keep track of the sights with ease and obtain the accurate hits needed at speed,” Lee said.

“Team Captain Max Michel, Jr., and I built Team SIG to prove what we already believed: the ultra-adaptable P320 is capable of winning in any discipline it enters,” Team Manager Gray said. “We have 25 great shooters driving the new gun in all practical shooting disciplines, and Max’s day job is winning matches. So, the privilege of taking a tournament with the P320 is a real thrill for me.”

Team SIG is made up of 25+ competitors covering a variety of shooting sports and skill levels. Led by Team Captain and World Champion Max Michel, Jr., Team SIG will showcase the versatility, performance and durability of the SIG SAUER P320 modular handgun, in addition to other SIG SAUER products. With a focus on visibility and approachability, Team SIG provides competitive shooters of all skill levels with education, advice and exercises to improve on the competition range as well as promoting overall firearm safety.

SIG SAUER, Inc. is a New Hampshire-based weapons systems provider leading the industry in American innovation, ingenuity, and manufacturing. SIG SAUER® brings a dedication to superior quality, ultimate reliability, and unmatched performance that has made it the brand of choice among responsible citizens, and many of the world’s most elite military, government, and law enforcement units. As a complete systems provider, SIG SAUER offers a full array of products to meet any mission parameter, from handguns and rifles to silencers, optics, ammunition, accessories, and airguns. The largest member of a worldwide business group of firearms manufacturers that includes SIG SAUER GmbH & Co. KG in Germany and Swiss Arms AG in Switzerland, SIG SAUER is an ISO 9001: 2008 certified company with more than 900 employees. For more information on SIG SAUER, any of its products, or the SIG SAUER AcademySM, log on to www.sigsauer.com.