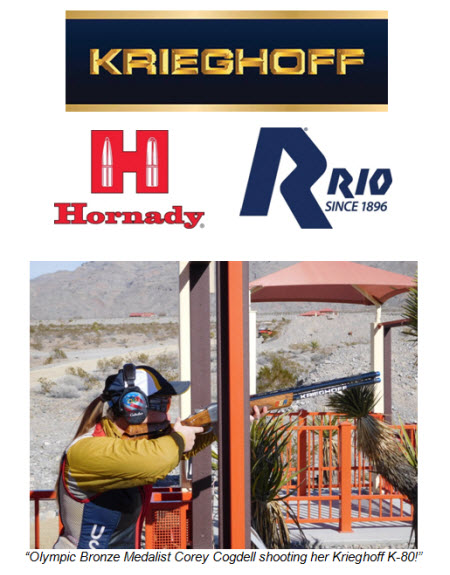 Tucson, AZ – (AmmoLand.com) Joseph Hosmer, President, Safari Club International Foundation, announced that on Tuesday, February 2, 2016, SCI Foundation and Krieghoff International hosted their Fourth Annual Sporting Clays Shoot at the Clark County Shooting Complex in Las Vegas, NV. This year, 108 shooters signed up to shoot at the event. Proceeds from the shoot benefit SCI Foundation programs, including its continuing partnership with the Boy Scouts of America. Shells for the shoot were generously donated by Rio Ammunition.

As the title sponsor for the 2016 shoot, Krieghoff International has donated a new Krieghoff K-80 Pro Sporter over/under, 12 gauge shotgun with 32-inch barrels, which was be given away by sweepstakes drawing in the SCI Foundation booth on Saturday, February 6th.  The winner of the shotgun was Don Russell of Plainview, TX.

Participants of the event enjoyed a morning of shooting followed by a catered BBQ lunch and an awards ceremony where winning teams and top individual shooters were honored with plaques.

The winners of this year’s shoot are as follows:

Krieghoff also brought along some of its world-class big bore double guns and Semprio In-Line repeating rifles for shooters to try out again this year. Hornady Manufacturing Co. generously provided the ammunition for the big bore rifle shoot.

Safari Club International Foundation is a 501(c)(3) non-profit organization that funds and directs worldwide programs dedicated to wildlife conservation and outdoor education. Any contribution may be tax deductible under Internal Revenue Code section 170(c) as a charitable contribution to the extent permitted by law. Tax deductible amount of gift is reduced by the “Fair market Value” of any goods, services, or advantages that a sponsor receives for the donation.EIN #86-0292099