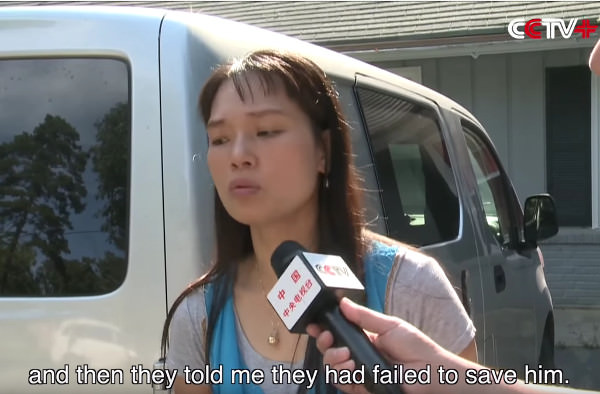 Just before 4 a.m. on 16 September, 2016, in Gwinnet County, Ga, a courageous Chinese immigrant drove off three home invaders.  It was all captured on surviellance video. The event went viral; not in the United States, but in China.  Chen Fengzu gave this interview to China Central Televison.

From China Central Television 1 minute, 42 seconds.  Here are the captions:

I didn’t have any choice, so I had to take out the gun I’d hid there.
Then I loaded my pistol and walked out of my bedroom.
I shot at the Invaders when I saw them.
One of them fled quickly, and another one ran away from the front door.
Then I shot again, the one inside my home also broke the glass on the back door and ran away.
I did not feel scared at that moment.
and all I thought about was how to handle the situation.

First I chose to call 911.
I called on the phone while I took out the pistol.
But my phone call could not get through.
So I had to open fire on them while calling 911.
Police took off the Burglars’s clothes and attempted to resuscitate him for about 15 to 20 minutes.
and then they told me they had failed to save him.

There is surveillance video of the actual action.  Some things stand out from the reporting of this case.

First, that Chen Fengzu, (last name first in Chinese usage) received some warning from her store assistant, who was in a separate bedroom.  He yelled “No Money”, which likely alerted Fengzu to the robbers.

Second, she had to load her pistol.  She only loaded it with a few rounds, and ended up shooting the pistol dry, which can be seen in the second video.

Third, you do not need to be a practiced pistol shooter to be effective with a pistol.  Fengzu had been given the pistol  less than a month ago, from her husband.  She had only shot it once.  Good tactics and good shooting ability will give accomplished shooters an edge, but pistols are made to be ergonomic.  Fengzu did very well for a novice shooter.

Link to video of action

The video and incident have gone viral in China.  Many Chinese immigrants are now  arming themselves and becoming fans of the Second Amendment.

“For Americans, gun ownership is in their blood. It’s part of the culture and part of their identity. For most Chinese, however, it’s not something they’re naturally interested in. But it’s becoming not safe to not have a gun,” said Li Ran, one of 10 co-founders of the club, which began in 2013 after the group originally met through an online forum to talk about their shared interest in shooting.

This home invasion did not go well for the invaders.  One was killed.  It is likely the other was wounded.  It was all over long before emergency responders could reach the scene.

The pistol Fengzu used appears to be an S&W SD9VE.  It has a 16 shot magazine.  It has been reported that Fengzu only loaded six rounds in it, but it appears to me that she shot 8 or 9 times in the video. I suspect that she will load more rounds in the future, or load another magazine.

Chen Fengzu is a heroine, and serves as an example of courage and determination in action to all of us.

Glad her husband provided her with the pistol to defend herself.

I believe he should have taken her to the range for training by an
experienced instructor or at least get her more range time.

Who knows what will kick open your front door next Tuesday?

MY Wife Is Chinese and she Loves the shooting sports and shoots every gun I own including My 44 MAG S+W.. Even My buddies little 11 yo Asian step daughter loves the 44 mag –I tell her IT Jumps just hold tight and she shoots up all my ammo !!
Way to go lady,,, When Video Chatting with My extended family in China they all want me to go show them guns — They love it !!

Well done Ma’am! Don’t feel bad that you had to shoot a POS invader, they got what they deserved!! I think you should go to a gun range though so you are more familiar with your weapon! All in all though you did well-the bullets were in the bad guys and you were safe!!!

Well done. We’re all glad she discounted the advice of those Colorado lawmakers as to how to deal with such threats…. instead of peeing on them she leaded them. One of them permanently. That particular model Smith is a wretched pistol… I fell for one early on in my handgun exploration period. Could not stand it, Managed to recoup my money when I resold it. BUT, as Massad Ayoob famously says “any gun will do if YOU will do”. And “do” she certainly did. Next time, have that handgun ready to go, and a spare mag already prepped. If she’d… Read more »

To bad she missed the other two.

Chen Fengzu is the type of immigrant that made this country great. Legal immigration does work, contrary to how much Hillary and all her open border sycophants so stridently protest! This is a great story to illustrate both the advantages of civilian gun ownership and welcoming those to our country who will work to make themselves productive citizens according to our laws. I hope Chen Fengzu has or will soon be taking her oath of citizenship. As for as I am concerned, she’s already passed the responsibility test.