Arizona – -(Ammoland.com)-
The Industry Day at the Range is only open to media by invitation. I have been fortunate to be able to attend the last three or four.  It seemed that attendance was down a bit this year from last.

The weather was nicer last year, warmer, but both years had a bit of a breeze.

It is always interesting to see the latest tech that is being offered.  I have found that taking the shuttle bus from the Palazzo in Las Vegas, Nevada, is worth while.  Parking is limited at the Boulder Rifle and Pistol Club, which generously allows use of its facilities for the Industry Day at the Range.  There were several hundred attendees, but I did not do a count.

I bumped into Dave Workman, always a pleasure, and Brian Johnson from Ammoland in line, waiting for the shuttle.  Right behind us was a group of three Canadian media people who had to go through a few hoops because they were digitally oriented. That is, all their “paperwork” was digital. Fortunately, one of them had brought a business card.  The Shot Show is serious about who is allowed at their events.

I got into  a friendly conversation with the Canadians.  In my attempt to aid international relations, I allowed as how Prime Minister Trudeau must have some redeeming qualities.  I mentioned that he was generous to a fault; the Canadians noted that it was with other people's money. I mentioned that he was considered attractive; they countered that the women's vote was the only reason he was in office.

I said that he showed a great love for Cuba. They said that Canada had wonderful relations with Cuba, and that Cuba did not have anything they needed.

In spite of my ham-handed attempt to smooth U.S. Canadian relations, the Canadians attending the Industry Day at the range were friendly and positive. They seemed to prefer a loosening of some of the Canadian regulations. They did not think the Prime Minister Trudeau would be in office for an extended length of service.

I heard something about “hoping we do not get too deeply in debt” or some such.

I have been hearing similar things for the last eight years South of the Canadian border.

I suggested that a relaxation of border crossings, for Americans with firearms should be included in new NAFTA talks.  I would be glad to extend the favor to Canadians crossing to the South, or into Alaska. Surely something can be worked out for International reciprocity…

I stopped at the KRISS booth. They had a number of interesting product, including a full auto pistol caliber carbine.  It was interesting to shoot. 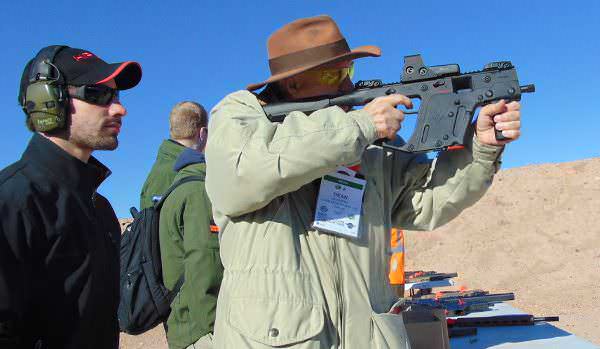 The placement of the selector switch is inches forward of the trigger finger, requiring a some shifting of position to work the switch.  The optical sight made hits easy to make. Even on full auto the recoil did not shift the sight picture very much.

Written from the Press Room at the Shot Show. The Show opens tomorrow in Las Vegas.

Welcome to Vegas this time of year. Breezy or gusty two out of three days.

And welcome to my club range. We’re happy the industry enjoys it every year.

That was less about SHOT show and more about politics.