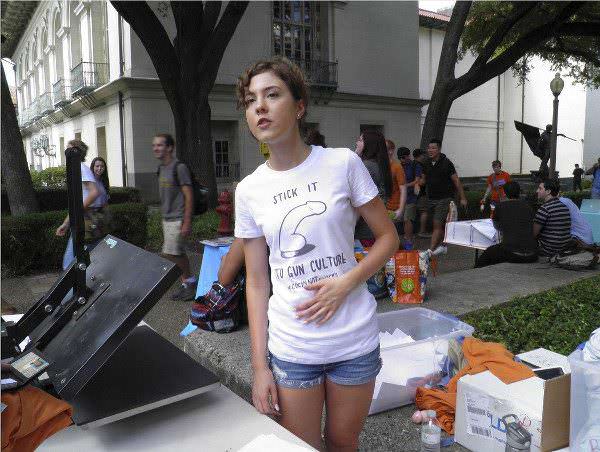 In 2016, students at the University of Texas at Austin staged a protest involving the public carry of sex toys. The protest was supposed to somehow change people’s minds about the exercise of Second Amendment rights on Campus. The protest made national news for a day or two. No discernible effect was noticed at any administrative or legislative level.

As a subjective matter, it seemed to trivialize and demean the protesters, labeling them as juvenile and preoccupied with sex. There appeared to be some sort of rule against the sex toys on campus. It is hard to understand what point the protesters were intending to make. It appears to me that the current crop of leftist protesters are obsessed with sex. Because they know little to nothing about guns, they attempt to somehow equate guns with sex, a subject they are much more comfortable with.  Some people have claimed that people who open carry guns are attempting to be noticed.  What does that say about people who march around waving large sex toys?

Now, students at the University of Wisconsin, Madison, are planning to duplicate the Austin Texas, failure, in 2017.

A group of University of Wisconsin-Madison students is planning to carry sex toys on campus to protest a bill that may come before the state Legislature next year.

The bill, currently in drafting stages, said its sponsor, Rep. Jesse Kremer, R-Kewaskum, would allow concealed weapons in public college or university classrooms. Concealed weapons are already allowed on campus grounds, but not in buildings.

Kat Kerwin, a sophomore at UW-Madison who is organizing the protest, said concealed weapons will make students uncomfortable in the classroom.

Kerwin said she believes professors will feel uneasy as well.

There are differences in the two universities, of course. Both are large, “progressive” public universities. Both strongly depend on the generosity of the people of their state, through the state legislature. The Texas protest took place in nice weather. If the Wisconsin protest hopes to wait for nice weather, they may have to wait until after spring break.

Wisconsin already has campus carry, except for most University buildings. Texas has just implemented the campus carry legislation, including most buildings.

In the gun culture, professors that will not come to or teach at a university with campus carry is a bonus. The question has never been “will it make a campus safer?” The demand is “You have no legitimate reason to deny us our rights!”

The image of a couple of hundred frosty “progressive” students parading around in their parkas with their frozen sex toys waving about is almost too good to miss.  I have a contact or two in Madison.  Perhaps I can find someone to take pictures. Don’t drop those things on the sidewalk. In below zero temps, they would almost certainly shatter. That is the engineer and meteorologist in me speaking.

Have at it, boys and girls. Should make some great photography!
©2017 by Dean Weingarten: Permission to share is granted when this notice is included.

“As a subjective matter, it seemed to trivialize and demean the protesters, labeling them as juvenile and preoccupied with sex.”

I wonder if these are the same type of young adults (and I use the term loosely) who need Play-Doh and coloring books to console themselves when their preferred candidate loses an election . . .

You got it. Not hard to figure out, was it? Wait till these shrinking violets have to “endure” and “cope with” national right to carry being recognised.Pore widdow thangs will have to find a basement room to rent, line it with rubber, have all their food delivered, as it will be unsafe to be out in public… oh the horror of walking down the street, ir sitting down to coffee somewhere, and there is this POSSIBILITY that SOMEONE within sight is ARMED!!!!! And I didn’t even KNOW IT!!!! WAAAAHHHHhhhhh!!!!! When I am out and about, I go near hundreds of… Read more »

There is more danger in having my pistol stolen out of the lock box in my car outside the building, then me carrying it @work. If someone notices it on my person, I will be arrested & fired. Kiss my insurance and pension goodbye. I pocket carry, odds are low that it would happen but I have to much to lose.

Stay alrert, stay armed, practice with your weapon and your mind set. Conceal your weapon and keep your mouth shut about it. As far as I am concerned, open carry is an ego trip that makes you the first target in a shootout. If you have to defend yourself it should be a surprise to your enemy.

In a Pinch would they prefer silicon or steel?

On one hand I can see there point if you can carry a gun on campus why can’t you have a sex toy on campus? I think you should be able to carry guns and sex toys on campus. But I don’t think that is really what they want.

@MrApple, Sadly… you are right. But look on the bright side, the proud dad has nice tuition, fees, and dorm bills to keep him happy.

more than likely she has an absentee daddy that does not love her…. thus her “need” to carry about a penis on her chest.

Or she was stolen away from and hidden from her father buy psycho Tramp for many years under false allegations.

If it’s college level…….why is idiocy so rampant?

It’s Madison Wisconsin! Liberal HQ of the North. Everything you thought you knew about common sense is out the window!

Stay alrert, stay armed, practice with your weapon and your mind set. Conceal your weapon and keep your mouth shut about it. As far as I am concerned, open carry is an ego trip that makes you the first target in a shootout. If you have to defend yourself it should be a surprise to your enemy.

It is about weather the right to bear arms stops at the university boundry. But like most thins these days it is about what happens when some duranged person, student or terrorist. Gets up in a public place and points a gun at you or another person. With conceled carry you may be able to protect yourself or your fellow classmates. Dont pretemd it cant happen. You jave people walking into elementary schools shooting a preteen kids as well as plenty of on campus shootings. This can and has happened more than I want to acknowledge. Concelled carry by definition… Read more »

How can concealed weapons make anyone nervous?? If they’re concealed, by definition no one can see them so they won’t even know they’re there! And if the SHTF which would you rather have access to; a steel frame 1911 or a rubber penis?

well, the second item MIGHT make the perp working his evil distracted for a couple of seconds, at which point someone else with some stones might be able to jump him. But the former, exposed and put into appropriate use, could very quickly and permanently settle the matter, and either help the putative perp make an informed decision, or assure he will never have to make another decision in his life. Were I in such a classroom, with an active and determined perp, I know which one I’d “take out and expose”. And use for its intended purpose. It would… Read more »

“The image of a couple of hundred frosty “progressive” students parading around in their parkas with their frozen sex toys waving about is almost too good to miss. ”