AUSTIN, TEXAS –-(Ammoland.com)- Everytown for Gun Safety, the gun-control conglomerate that falsely told both state legislators and the public that Texas’ then-pending campus carry law would allow guns in fraternity houses, off-campus parties, and football stadiums, is now blaming that law, which allows licensed adults to carry concealed handguns on college campuses, for last week’s mass shooting by an unlicensed minor armed with a shotgun at a Santa Fe, Texas, high school.

Everytown, which also funds the conspiracy-peddling online magazine The Trace, recently purchased a full-page ad in the Houston Chronicle and used that premium ad space to publish an open letter to Texas Governor Greg Abbott, signed by 41 student gun-control activists. In the letter’s opening paragraph, the signers criticize Abbot for having “signed dangerous policies to force public colleges in Texas to allow guns on campus.”

Texas is currently one of six states that allow the licensed concealed carry of handguns in public college classrooms[i]. In these states, campus carry is allowed on a total of more than 350 campuses and has been for a combined total of more than 2,000 semesters. Not one of these states/campuses has reported a resulting assault, suicide attempt, or fatality. So what are Everytown and its 41 student activists complaining about?

The vast majority of peer-reviewed studies on the issue of licensed concealed carry have concluded that it cannot be shown to lead to an increase in violent crime. Furthermore, licensing, conviction, and license revocation statistics maintained by the Texas Department of Public Safety suggest that a person on a Texas college campus is hundreds of times more likely to be assaulted by an armed student who is not licensed to carry a handgun than by one who is. So, again, what are Everytown and its 41 student activists complaining about?

It speaks to the cogency, or lack thereof, of Everytown’s arguments that they were forced to pay for a full-page ad in order to make their case to the public. Students for Concealed Carry (SCC), which lacks even one-tenth of 1% of Everytown’s massive and often misspent budget, has traditionally used op-eds, which cost nothing but do require well-articulated arguments, to get its message in front of Houston Chronicle readers.

Quinn Cox, Southwest regional director for SCC, commented, “The purchase of this full-page ad is par for the course for Everytown. After an impartial poll by the University of Texas at Austin and the Texas Tribune found more Texans in support of campus carry than opposed to it, Everytown spent a small fortune commissioning their own internal poll with the purpose of getting the opposite result. Suffice it to say, we’re not exactly shocked that they’ve chosen to address the problem with cash rather than facts.”

ABOUT STUDENTS FOR CONCEALED CARRY 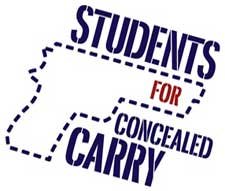 Liberal’s Democrat’s and liars are synonymous!!!!!!

What good is it to charge an individual with 5,10, 15 plus counts when they end up plea dealing to lesser charges, serve months not years, get early release, parole, then offend again in 24-36 hours.

Stop concurrent sentences, consecutive sentencing should be the norm.

The Left is dancing on corpses again.

I guess their “trace” of logic capacity has not been enough to let them comprehend that the brat who shot up the Sante Fe school had violated quite a few of their beloved “common sense gun control laws” before he ever pulled the trigger on either of the weapons he brought to that school: theft of firerarm, two felony counts, Minor in possession of loaded firearm in a public place, two felonies. Tramsport of loaded weapon in a vehicle without carry permit, two felonies. Possession of firearm with intent to commit harm, two felonies. Possession of firearm in a Gun… Read more »

Let’s save tax payers dollars and not clog up our courts. The school shooter should be shot dead on sight by LEOs as soon as they find him. Furthermore the shooter’s body should not be embalmed,but rather just toss ’em into the incinerator, and dump the ashes into a toilet/sewer, and not allow their names to be mentioned on any media. Just my 2 cents

Sandy Hook shooter is dead and rotting in Hades.

I like to repeat myself from time-to-time. The difference between a conservative and a liberal is………
Conservatives hate to be wrong, but will grudgingly concede if enough facts are presented.
A Liberal can not possibly be wrong, so why consider facts.

It is a shame but so many of them do not have a clue what they are arguing against. Some authority figure has put big ideas in their heads and they swallow it hook, line and sinker. The donkeys depend on ignorance of their subjects to be able to carry on their programs.

“Everytown for Gun Safety Continues to Ignore the Facts”

Rather a Hallmark/gold standard of Marxist’s/Leftist’s/ProgTard’s and Commiecrats.
If the rest of everyone would just swill the Kool Aid we may see truth and facts in a different light,or Not.

They always forget that if a trained and armed teacher had been in the classroom when the shooter came in, there probably would be fewer student deaths and one less idiot to prosecute. As it is many schools are an open invitation to a killer.

In reality, if it is known there might be trained and armed teachers then it is far less likely someone will try to attack the school in the first place. The deterrent factor is hard to directly measure, but the fact that somewhere in excess of 95% of these shootings occur in”gun free zones” is a telling statistic.

Democrats don’t care about the Truth, they love to put out lies because they know their people will believe the lies.

Keep Socialists, Marxists, Communists out of the United States and all of there followers………..

It is so easy to spot a liberal, I do it every day driving down the road. Watch the cars tat pass you and you will see what I mean.

With the liberal garbage many professors spew maybe they are afraid of the armed students reaction.

Missouri – NOT disagreeing with your point but that is one of the primary ‘reasons’ er um ‘excuses’ that the antis continue to use – they are in abject fear (so they claim) that they will somehow ‘set off’ one of those students – who have to be at least 21, take the LTC course, have a comprehensive background check done (I wonder how many of the libs could pass that). Anyone who is that responsible is highly unlikely to ‘go off’ on a professor with whom they disagree. Yet that excuse is STILL being used.

GSA, And yet it is the socialist libtards, yearning to have the power, that make the death threats and engage in violence in the streets.

It’s called “projection.” They can’t trust themselves with guns, so obviously, we can’t be trusted with guns.

I guess the lady in the picture forgot students that go to these schools are bringing the guns.

The title of the online magazine The Trace must refer to their intelligence.

Heed the Call-up
Reply to  Mark

It is just the only thing that is not a lie on their site, a trace of truth and honesty.