Colorado -(Ammoland.com)- Big cats are dangerous predators. They usually attack from ambush, without warning, often from behind. That happened to a runner in Colorado. But the runner was not listening to music on earbuds or headphones. He heard something. He started to turn around. He saw the lion launching itself at him.

Here is the initial report from Colorado Parks and Wildlife. From state.co.us:

LARIMER COUNTY, Colo. – Colorado Parks and Wildlife officers, working with Larimer County Department of Natural Resources, are investigating a mountain lion attack on a trail runner using the West Ridge Trail at Horsetooth Mountain Open Space on Monday, Feb. 4. The victim was able to defend himself from the attack, resulting in the death of the juvenile mountain lion. The runner was then able to leave the open space property and get himself to a local hospital.

“Mountain lion attacks are not common in Colorado and it is unfortunate that the lion’s hunting instincts were triggered by the runner,” Ty Petersburg, area wildlife manager for Colorado Parks and Wildlife said. “This could have had a very different outcome.”

The victim of the attack described hearing something behind him on the trail and was attacked by a mountain lion as he turned around to investigate. The lion lunged at the runner, biting his face and wrist. He was able to fight and break free from the lion, killing the lion in self-defense. The runner sustained serious, but non-life threatening injuries as a result of the attack.

As wildlife officers searched the trail area provided by the runner, the body of a juvenile mountain lion was found within feet of several possessions that the victim asked the officers to look for on the trail. The lion has been taken to the Colorado Parks and Wildlife animal health lab for a necropsy.

“The runner did everything he could to save his life. In the event of a lion attack you need to do anything in your power to fight back just as this gentleman did,” said Mark Leslie, Colorado Parks and Wildlife Northeast Region manager.

The initial report did not explain how the man managed to kill the lion. I immediately suspected he choked it to death. A tweet from the CPW confirmed that a few hours ago. 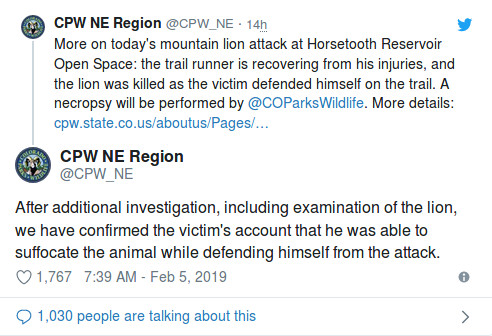 The smaller wild cats, up to and including mountain lions and leopards, can be killed by a man without weapons. In this case, the victim used his body weight and hands. The victim managed to separate the cat from his face and hands. Then he pounced on top of the cat, pinning it to the ground while he choked/smothered it. The body was used to immobilize the cat and neutralize it claws and teeth. He might have used his body to crush the chest cavity.

There have been cases in the United States where unarmed people have killed rabid attacking bobcats.

The photographer used his weight to advantage, crushing the leopard’s chest.

These incidents usually occur with cats that weigh less than 100 pounds.

I suspect the victims would have preferred to have almost any handgun. A handgun would allow them to end the fight quickly and suffer less damage.

Knives, even small knives, have been used to good effect. A club can work on these cats. One leopard in Africa is reported to have died when it impaled its brain on a fish spear a man was carrying over his shoulder. A man in Canada recently killed a mountain lion that was attacking his wife. He used a spear.

Being alert is key to any defense. Few recover sufficiently from complete surprise. It is possible, but difficult and unlikely.

I refuse to wear a headset while out and about.

I guess jujitsu works on mountain lions too. The “rear naked choke”, learn it!

@Mike, is that the same as the naked strangle? Learned it.

During rattlesnake season, lots of folks carry on this trail and others in Larimer County open spaces.

No incident with a cougar, but years ago while home back east for a funeral, trying to relax from the stress of the loss, I was riding an old path on a light trail bike. These were woods and hills near a large swamp where I had roamed with my dog when I was a kid…3 to 4 miles from the house but in heavy underbrush under a large pine canopy with no roads. I rounded a curve in the path and was confronted by a pack of 8 or nine dogs. Mixed breed ranging from German shepard size down… Read more »

Horsetooth is near CSU and full of people compared to where I see lion tracks often miles North. People there would look at you funny for open carrying… Even now.

I don’t think that runner will be venturing another run without some other kind of protection from here on, and it really must have been a young cat with really no hunting skills, a senior cat wouldn’t have made the noise to start with, my scare came years ago in Colorado, keeping alert and not running was the thing that kept us from being a meal was we stood our ground, we did what the Ranger told us to do it worked!

This is what happens in the Backcountry of Colorado when…………We have enough Californians here to legalize weed, vote in a queer for governor, a transvestite for a state rep……………….AND WHAT THE HELL WILL WE HAVE NEXT!

Let’s keep the Cats and EXPORT the californians!

I hunted in the Warner Mountains several years ago. Having been warned by several ranchers about cats’ attacking from behind, I always kept my eyes on my six 0’clock. Never saw any, thank God. A game warden (very nice guy who checked my license at another ground-squirrel ranchsite) related to me when he was attacked by a mtn lion. He killed the animal, but only after emptying all of his .41 caliber rounds from his semi-automatic pistol. I think he said the total was around 14 rounds capped off. In California, the State and Federal authorities take a dim view… Read more »

Keep your eyes and ears open. Stay aware of your surroundings. An aggressor with 4 legs can be as dangerous as an aggressor with 2 legs. A side arm should be considered like the American express card–Don’t leave home without it. I don’t know if this guy was skilled or just lucky but at least he is alive. A hundred pound cat is nothing to take lightly. They commonly kill deer and even elk sized animals. A cow elk will weigh in at about 500 lbs. Should one be attacked by a mountain lion the odds are decidedly NOT in… Read more »

Many cats attack from behind. Workers in India. often wear a mask (fade) turned behind their head (backwards)while in the field.

I call bullshit. Really do not think this guy was just out for a jog.

I live in Colorado — you are so right Dumbfounded, he was actually out looking for the Titanic. the first part of your name dumb fits pretty well. And contrary to our parks Director, Colorado has a bunch of mountain lions.

If you’re out on the trail pack something. Even a 380 is better then nothing. There are elastic holsters/body belts available that work well for runners. You can carry a small handgun, an extra mag and IDs while you run or walk. I picked up mine on Amazon. (https://www.amazon.com/GoZier-Tactical-Holsters-Concealed-Neoprene/dp/B0752Z1B4K/ref=sr_1_7?ie=UTF8&qid=1549469504&sr=8-7&keywords=elastic+concealed+carry+belt) Most places don’t have to worry about big cats but there are plenty of stray dogs out and about. You need to protect yourself not only from four legged predators but from the two legged type too. There are a lot of isolated spots in many urban and suburban walking/running paths… Read more »

Right. People seem to think that they live in some sort of invisible shield where nothing bad can happen to them! Yes there have been cases where people successfully defended themselves against even a full-grown lion [see Harry Wolhuter] but they got badly and needlessly torn up in the process.
There are many more cases where people died because a gun was not available.

Shoulda been a DGU or at least a knife

This cougar would have had to be very juvenile and small, indeed, for the incident to have happened as stated.

Gives new meaning to the words “fight of your life”

Situational Awareness, and refuse to be a victim…Fight to the last breath!

Free janam kundli analysis by date of birth and time. Janak kundali help you’re to know everything about your future, and planet effects on your life. Get online kundli in Hindi and English. Janam Kundli also known as birth chart, Janma Patrika.

Looking in my crystal ball, your future is nebulous. There is a man named “Freddy the Deletor” in your future. Your post will come to a bad end.