In November of 2021, there were about 1.51 million firearm sales conducted through the National Instant background Check System (NICS) and 2.69 million NICS checks. November of 2021 was the third-highest November for gun sales and total NICS background checks since NICS was started in 1998.

In the estimation of the number of firearms sold, background checks for multiple items are multiplied by 2.5 to obtain an approximate number for sales. 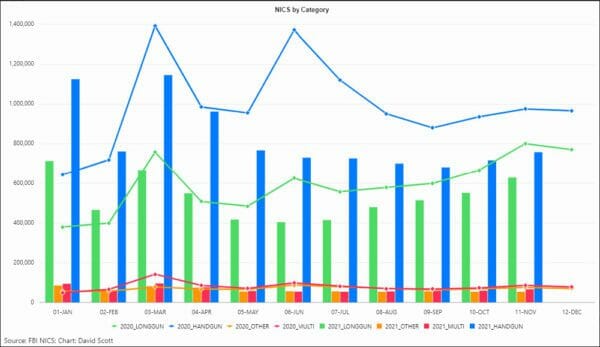 From this correspondent’s subjective experience, reading and watching of markets, it appears some firearms are becoming available; some ammunition is coming back into stores, some prices are dropping for some items. This indicates we are approaching rough parity in supply and demand for firearms and ammunition.

With 18 million firearms sold in 2021, the total stock of private firearms in the United States will have grown to approximately 481 million. This estimate is calculated with the method pioneered by Newton and Zimring. It was extended by Gary Kleck in “Point Blank: Guns and Violence in America”.  The number is the cumulative addition of domestic manufacture, with the addition of imports and the subtraction of exports.

The NICS checks are used to estimate the numbers in the current year. It is about a year and a half before the ATF numbers for manufacturing are released. The import/export data comes out after about a year.

The demand for guns and ammunition has fallen just as the popularity of the Biden administration has fallen, along with falling trust in pandemic solutions and trust in government institutions such as the CDC, FBI, CIA, the Congress, the Media, Police, and the Justice system.

The demand for firearms and ammunition seems to be falling as the possibility of a Republican capture of one or both houses of Congress in 2022 increases.

The demand for guns and ammunition is being driven by political uncertainty, rising crime rates, and increasing international uncertainty.

In this correspondent’s reading of history, the current situation is eerily similar to the late 1920s and early 1930s a century ago. There is a rising power (China vs Germany), a superpower wary of exerting power and uncertain of its moral justification (Pax Americana vs Pax Britannica) and rising technological and military innovation.

Uncertainty seems built into the near future.

Yup, and a couple of those were mine. More to come. The democraps really are great salesmen.

I wish I could afford to buy a new gun since the ilegitiment clownshow Joe Biden was installed in the oval office prices have went through the roof and ammo is non existent . LETS GO BRANDON #FJB

Maria Bartiromo is reporting 6.8% inflation for November. Her guests are predicting worse in the coming months. Merry Christmas and above all FJB!