The email was sent Wednesday morning to all LAPD personnel by Commander Ernest Eskridge, assistant commanding officer of the department’s Detective Bureau.

Eskridge noted that on June 23, the “United States Supreme Court vacated the ruling in Duncan v. Bonta and remanded the case back to the 9th Circuit Court of Appeal for further consideration in light of its recent decision in New York State Rifle and Pistol Association v. Bruen.”

Because of this ruling, Eskridge said in the email, all sworn LAPD personnel shall not “investigate, detain or arrest” anyone for possessing a magazine capable of holding more than ten rounds unless they are already legally barred from possession of ammunition in the state.

There were three issues in Duncan v. Bonta: whether a law prohibiting law-abiding citizens from possessing magazines in common use violates the Second Amendment, whether confiscating legally obtained magazines violated the “takings clause,” and whether the “two-step” approach of the 9th Circuit and other courts applied to Second Amendment cases is constitutional and meets Supreme Court precedents.

In Bruen, the Supreme Court held that the Second and Fourteenth Amendments protect an individual’s right to carry a handgun for self-defense outside the home and that New York’s “special need” requirement for a concealed-carry permit violates those protections. 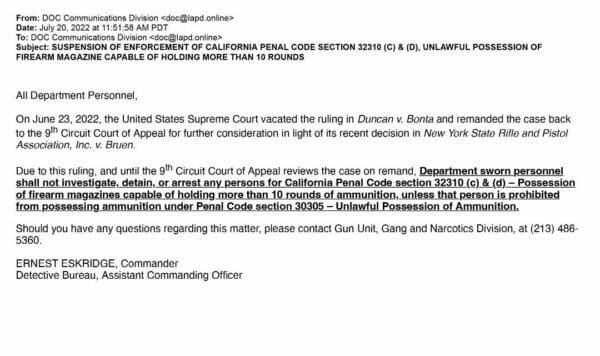 This story is presented by the Second Amendment Foundation’s Investigative Journalism Project and wouldn’t be possible without you. Please click here to make a tax-deductible donation to support more pro-gun stories like this.

One may ask why liberal progressives (aka marxists) have these insane anti-Constitutional ideas about law and order, justice, and freedoms. They are deliberately creating chaos and disorder as a precursor to destabilizing society and paving the way for top-down Nazi-style government by elites. The elites can not have their way with a population armed to the teeth.

“That is why our masters in Washington are so anxious to disarm us. They are not afraid of criminals. They are afraid of a populace which cannot be subdued by tyrants. ” – late Col Jeff Cooper. They care about their own corrupt asses…..the WHY behind gun control.﻿

A quote from the late great Charlie Smith.

Witness the cratering of Progressive public policy in the cratering of Progressive New Left ideology. Progressives and leftists have believed they can control human behavior by controlling physical objects. In their war against everything: drugs, guns, knives, everything, has failed miserably because they cannot address the motive force behind crime and bad behavior. Cultural and moral relativism have no answers for those who choose to do harm. So in denying an entire population access to needful things like standard capacity magazines they hope to control behavior. Behavior is a product of the spirit, the soul, and when you root out… Read more »

Them Magpul D-60 drum mags are really nice and function flawlessly. Have two. They are kind of difficult to fully load at first but it becomes easier with use. Me and my son keep ours fully loaded between use and that really helps with loading too. Every AR15 owner in Kali.needs at least one of these bad boys. Plus ,plenty of “standard capacity” Magpul 30 rounders.

What every owner in Kommieforniastan needs is to get rid of Newscum and the Dims in the State House and to be able to order ammo online again. But with our little fascist DICK-tater that won’t happen.

Full auto they would be great, i saw vids on youtube of guys runnin those full auto, if you have to run them legal (one pull one round) they could make your AR quite heavy to carry though.

Have you tried using the lapalula loader that snaps on top of it just like if your loading a 30 rd mag. It has the lever on top, and pull it towards you, drop in a round, push it away, drop in a round, really simple then you don’t feel the pressure in your fingers and hands while loading. As fast as you can push and pull the lever, you can load quite fast.

This will be a quandary for every county/city in California. Los Angeles will be resisting the 9th Circuit Court stay and AG Bonta’s wrath regarding magazine capacity, which by the way is great news! But as I have experienced here in California, gun laws are just one cease and desist order away.

Perhaps not police so much as DA’s, judges, and other court personnel and officials. Street cops arent always or even usually the primary problem.

if they wont enforce a law it is moot, so the leos ARE the problem , they are the gate keepers
ever seen a judge arrest anyone???? he tells the bailiff to do it (contempt) or police with a warrant, leos tell them to do it themselves they will go skulk away in a corner

Sir, I don’t have to fear a da, murdering me for being armed to protect my family in all places, no matter a gunfree zone sign.. The greatest threat to us armed Citizens during or after a defensive gun use is cop near the scene. Older folks made it to where the cop can roll up and drop anyone with a gun without knowing the facts. That is cowardly, and should not be allowed. It is easy quite easy to control yourself under the fight, flight, or freeze adrenaline rush, aka buck fever, and asses the situation. The folks in… Read more »