By Dawn Derenski — November 2008 – -(AmmoLand.com)- Thirteen year old, Hunter Derenski, has been shooting competitive skeet since he was 11. For the past couple of years, Hunter has been shooting a non-Browning 20 gauge over and under. In the past few months he has consistently been shooting in the high 20’s including shooting 24’s a couple dozen times. Hunter’s quest for the perfect round just always seemed to fall just out of reach.

In September the Flat River Conservation Club (FRCC) in Greenville, Michigan, where Hunter shoots skeet, purchased some firearms through the Browning Cynergy test drive program. Hunter fell in love with the Cynergy a few months earlier when one of the members of the club came out to the skeet range with his new Cynergy. This became the “must have” firearm.

When the Cynergys finally arrived at the club, Hunter was first in line to shoot the clubs new 12 gauge Cynergy Classic Field firearm. Hunter wasn’t concerned that it only had a modified and improved cylinder choke in it. He just wanted to feel the wood stock of the Cynergy next to his cheek. Hunter headed out to the skeet field with the guys and settled in for his first round of skeet with a Browning Cynergy. Hunter proceeded around the course and closed the round with that Cynergy wrapped tightly in his hands, a score of 24, and a deep commitment to this new firearm. 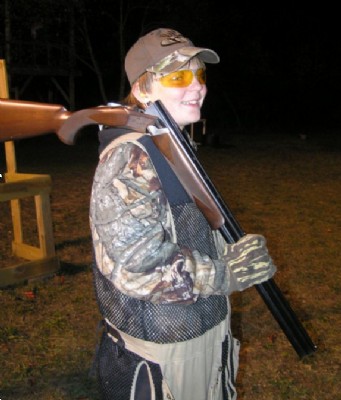 Hunter Derenski with the Flat River Conservation Club “loaner” Browning Cynergy.
Over the next week, Hunter proceeded to put another 125 rounds through the Cynergy with more outstanding scores. But none of those scores would be as memorable as the one that was about to come.

When he stepped up to station 1 and put round number 151 into the chamber he never realized that his quest for the perfect game was only 24 rounds away. It wasn’t just Hunter who was seeking that much sought after 25 or mine for that matter, but everyone who has watched him perform over the past couple of years was waiting with bated breath for Hunter to finally see his dream come true.

When the 25th target left the station 8 low house and Hunter smashed that clay there wasn’t a person out there who wasn’t living in that moment with him. When the excitement settled down Hunter looked over the Cynergy and said “this is one sweet gun.”

Hunter has continued to take advantage of the opportunity at the club to use the Cynergy whenever possible. He does, however, have a new goal of shooting 50 straight with the Cynergy and one day possibly buying the Cynergy that he shot his first 25 with.

Thanks so much to the FRCC and to the Browning Company for giving our club shooters this wonderful opportunity. I know one young man who is a Browning Fan for Life.

This article is used with permission from Dawn Derenski. Mrs. Derneski is Hunter’s mother and is a self-proclaimed “skeet mom.”

(The Browning “Cynergy Test Drive Program” is available only to selected shooting ranges and hunting clubs. Have your club or range contact a Browning sales rep for information.)