The outrageous “Assault Weapons Ban” is back via State Rep. Eddie Acevedo who represents District 2 in Chicago. HB1294 is a repeat effort to ban just about every sporting and self-defense gun owned in Illinois, along with magazines holding more than 10 rounds, unless of course you still have the receipt from when you bought the gun or magazine some 15-20-30 years ago.

This is another attempt by Chicago and Cook County’ to prevent law-abiding citizens from exercising their Second Amendment rights.

All shotgun ammo over .410 would be banned.

Acevedo’s trio of atrocities against gun owners includes HB1855 which would penalize the victims of gun theft by barring them from owning firearms permanently if they didn’t report a theft within 72 hours of knowing about it – but who is to determine when someone knew or should have know about a theft? There in lies the danger.

To find your district or state representative, go to the Illinois State Board of Elections.

Please come show your support for Right to Carry. Bring your friends and family!

Do you have questions or concerns about Right to Carry? Come to the town hall meeting and let our panel of experts address those questions and concerns. 49 States Are NOT Wrong!! 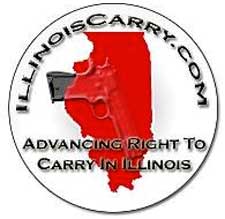 @Reality Check, back at you, dude your logic is so wrong it makes me puke, but at least we have a 50/50 shot of you going mental and killing yourself….LOL

I support very limited concealed carry but I'd rather keep Illinios laws the way they are. Weapons manufactured, sold, and smuggled from the US into Mexico are being used to commit crimes against law abiding citizens and are being used against the Police in Mexico's drug war. US citizens shoot and kill each other at the highest rate per 100,000 in the civilized world, yet people fight to overturn common sense gun laws that keep guns away from kids, out of vehicles, and off the streets. The reason criminals have easy access to guns is because too many "law abiding… Read more »

For those of you that don't know, "Fast" Eddie Acevedo is currently on authorized leave from the Chicago Police Department.

He can carry a firearm in Illinois – something he has fought tooth and nail against allowing us mere serfs to be allowed to do – as an IL LEO, and can also carry around the country under LEOSA.

His various gun ban proposals all include EXEMPTIONS FOR LAW ENFORCEMENT, himself included.

As a sworn officer myself, if you're not a criminal you should be allowed to exercise the same rights we can.

"He is a second generation Mexican-American"
http://www.housedem.state.il.us/members/acevedoe/

See how great these laws against the law-abiding public are working in Eddies' homeland?

No violence, decapitations, or gun battles in Mexico, thanks to the gun laws that Eddie is trying to transplant into the USA along with his family..

Passing laws against law-abiding citizens being armed has turned mexico into 'somalia-west'.

Can we just ship eddie and his family back to mexico along with the laws they are trying to import from mexico that are such failures?

Typical liberal dumbass. We have them in Ohio too. The whole inner city "We don't need more guns on the street" BS. I have yet to hear of a criminal say, "well, I was going to rob that bank but I am not allowed to have a firearm." Or, I wished I could have robbed that guy, but I needed a gun and the law says I can't have one."

We should ban dumbasses that don't understand the Constitution from holding office.