They use grieving victims to invoke an emotional response and spread misinformation falsely claiming that enacting their agenda would have prevented these tragedies and will prevent future tragedies.

Just yesterday, the former executive director of former New York City Mayor Michael Bloomberg’s anti-gun group admitted that mass shootings would not have been stopped by stricter gun control. Media coverage of mass shootings  repeatedly notes these tragedies take place in areas with some of the most restrictive gun laws in the nation.

Groups sponsored by Bloomberg have tried to inflate statistics and circumstances to play on the public’s emotions, and have been called out by independent fact-checkers as being false and misleading.

In predictable fashion, one day after the former executive director of Bloomberg’s group publicly stated that their gun control agenda will not prevent future tragedies, Bloomberg’s Everytown for Gun Safety held an emotionally charged press conference urging Congress to enact their anti-freedom agenda.

Just as the tactics of anti-gun groups don’t change, neither do the facts. The anti-Second Amendment agenda being pushed by Bloomberg will not prevent these tragedies from occurring. It’s clear that their agenda is not to make children safer or prevent tragedies, but to enact an extreme anti-gun agenda. If they were truly concerned with saving lives, they would work to address our broken mental health system and ensure that violent criminals are prosecuted to the full extent of the law. 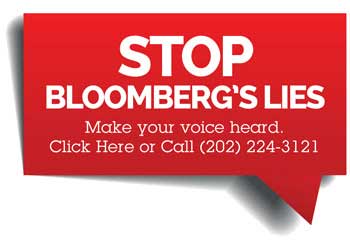 Michael Bloomberg and his operatives are not telling the truth to Congress or the American people.  Your U.S. Representative and Senators need to hear from your today.  Tell them you won’t stand for more ineffective bans on firearms; so-called “universal” background check systems; or any other gun control scheme.

Let them know you want serious legislation passed to fix the broken mental health system in this country – that is the real issue.  Bloomberg thinks he can buy the American people and the U.S. Congress.  He may have billions of dollars, but he doesn’t have you.  Please contact your Senators and Representative today to stop Bloomberg’s lies!

I heard Bloomberg and his anti-gun minions have a new mantra, “Not One More”. I think we should co-opt that mantra and declare “Not One More Gun Law”!

WHERE IS THE PROFIT for Bloomberg, should he get his way? How naive must one be to actually believe a billionaire has the American citizen’s best interests at heart? There isn’t a billionaire on this planet that got where they are by ‘helping OTHER people.’ There is so much more to this than just guns. I would say the gun issue is just the First Step. Perhaps ‘starry-eyed Michael’ is dreaming of Dictator Bloomberg, ruling over America? That can’t happen while we can still defend ourselves. And he knows it. You can arm every single alphabet agency in America, all… Read more »

And while I applaud the NRA for some of their accomplishments, when you contact or join them and request information also tell them you DO NOT want requests for money sent to you EVERY SINGLE WEEK.

If they want to get a good start on stopping gun violence then they should go after the gangs and thugs of that type as well as those that are unstable. The legal gun owners have nothing to do with the violence that has been going on, I have yet to see a gun get up and walk out the door and fire itself off without being handled by a person. It has been said many times and here it is again “DUNS DON’T KILL PEOPLE, PEOPLE KILL PEOPLE. THE GUN IS JUST A TOOL.” The day that they make… Read more »