USA – -(Ammoland.com)- It’s no secret, stories of home invasions, car-jackings, armed robberies, murders, assaults and even domestic violence are never-ending and the themes, eerily familiar, as they relate to the victims’ inability to protect themselves in one way or another; often, for gun owners, the shortcoming is a lack of effective defensive training.

This New Year’s I challenge you to a resolution. Rather than focusing as much as we do on weight, finances or the next big promotion, try something a bit more selfless and impactful. Resolve to be the protector… and survivor your family may come to depend upon. For me, this critical commitment was launched by Rob Pincus’ life-changing Combat Focus Shooting program; in fact, consider CFS, as it relates to ending threats and surviving, the gift that keeps on giving.

The basic premise of Combat Focus Shooting, like many training programs, is survivability. I was familiar with this logic, first, because I want to survive just as much as the next person and second, my extensive Marine Corps handgun training, through countless hours of instruction and range time, also preached the same – we just didn’t train the same. Unlike my military training and qualification with a 1911, and most other training programs, survivability, pursuant to Combat Focus Shooting, hinges on distinctly different cornerstones, chiefly among them, a balance of speed and precision, and beginning with fundamental principles of defensive handgun shooting; the operative word being “defensive”, shooters should certainly possess at least basic handgun experience and study which equipment is deemed most appropriate for defensive shooting – walk on the rocks I stumbled on! Let me explain…

As a professional in the hunting and shooting industry, I knew Rob in advance but had no concept of the premise of the I.C.E. Firearm Training Combat Focus Shooting program. Like most of my Marine Corps buddies who had trained and qualified (I proudly qualified Rifle Expert, 6th Award, and Pistol Sharpshooter) and, indeed, all veterans exposed to concentrated handgun training, I thought I knew precisely how to defend myself and what gear I needed to do it. Nothing could have been further from the truth.

My first CFS experience was to have Pincus condemn my holster before my first drill. 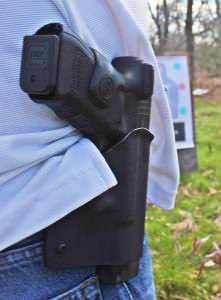 He handed me a new I.C.E. RAC Kydex OWB Holster and I did as he instructed, quickly changing holsters and joining the rest of the class for “balance of speed and precision” drills. This is the overwhelming theme of Combat Focus Shooting and a primary factor in survivability. The rest comes from instinctive, aggressive movements both in firearm manipulation and sustained fire without ever losing sight of the threat. In Pincus’ words, “If you’re looking down you’re not focused on the threat and if you’re not moving, you just might stay that way. Simple as that.”

Like a broken record, “balance of speed and precision” played on through every intense, physically grueling exercise from repeated, advanced versions of our first online drill to exhausting live-fire wind sprints and unnerving high-stress figure-eight drills. After two full days and 1,000 rounds of mentally and physically intense training, we survived. Of course, it’s worth noting the I.C.E. Kydex holster was a complete game-changer – the best I’ve ever used and still on my belt.

By the close of training, I was battered and bruised with rock-tape, expertly applied by CFS Instructor, Alessandro Padovani, running its X-pattern of support down the length of my strong-arm but I never broke… only persevered, learned and earned. I learned that before Combat Focus Shooting when I thought, as a concealed carrier, I knew everything I needed to in order to protect my family, I actually knew very little. I learned that the best way to protect my family is to train to stop a threat and survive to do it again if need be. Sadly, I also learned my beloved Marine Corps does not adequately equip my brothers-and-sisters in arms with training conducive to engaging an active shooter and surviving the experience. 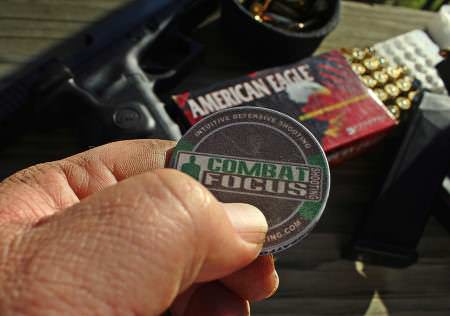 After training, Rob asked how I felt about Combat Focus Shooting. I chewed on his question for a moment, never truly answering. How does someone sum up a life-changing gift like CFS training in words that do it justice? You don’t. I was elated to have graduated the course, the prized CFS coin in hand, but my emotions were mixed. While elation was present so was humility and sadness. It wasn’t enough to acknowledge I knew much less than I thought, or even that personally, CFS was impactful beyond measure. I struggled with memories of the inadequate combat-focused handgun training I received as a Marine and that I suppose is still a disheartening reality.

At this time of year, when we search high and low for the right resolution to add depth and breadth to our lives, why not consider becoming the protector… and indeed the survivor, in the event of a threat, you are called to be? What better gift to your family is there than survivability? It truly is the gift that keeps on giving. 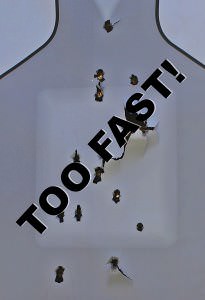 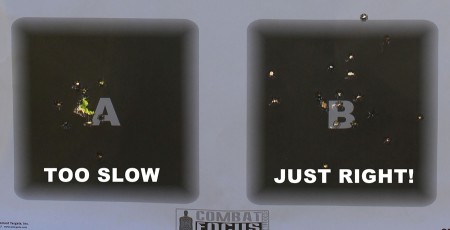 Side note – Balance of Speed and Precision is a simple concept. When engaging a threat your primary focus should never be precision accuracy, nor should it be to spray bullets in the actor’s general direction. Your best strategy for stopping an aggressor is somewhere in the middle, what Pincus refers to as the balance of speed and precision. Your goal should be to fire as rapidly as possible while maintaining a reasonable degree of accuracy; that is to say, keep your shots contained in an area referred to as the high-center chest.