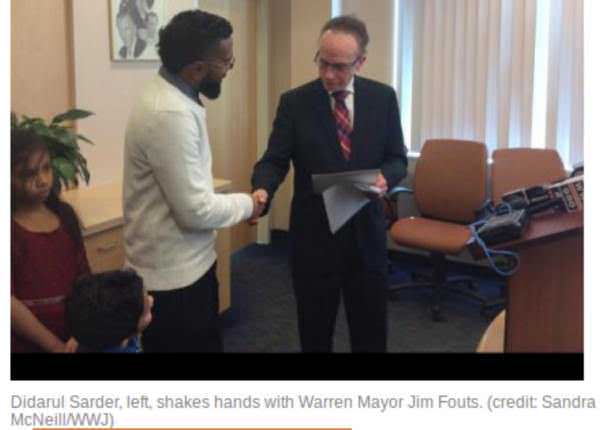 Arizona – -(Ammoland.com)- On 10 February, 2016, Didarul  Sarder, who was legally armed, used his handgun to stop a vicious knife attack on a woman in the GM facility in Warren, Michigan.  He likely saved her life.  Most of the action was caught on video.  GM has a “Gun Free” policy on their sites.  The original speculation was that Sarder would be fired.  There was enough of a public outcry for GM to make an exception to their policy.  Mayor Jim Fouts led the fight to insure that Sarder did not lose his job.  Fouts said that Sarder should be rewarded for his quick action. Today, 19 February, 2016, he was.   From mlive.com:

The mayor awarded Sarder with a proclamation at Warren City Hall Thursday.

“She was screaming and pleading for help, and one person made a difference,” Fouts said. ” … I believe that he’s the kind of guy I would want to be around … We never know when we are going to need a Didarul Sarder, and in this case it was an instantaneous decision, he did it without hesitating … and clearly he made a difference.

” … I might also add that he properly exercised his second amendment rights … Without his help, I believe this woman would have passed away.”

A  private citizen, Marty Claquw, who owns a Jewelry store, decided that Sarder should be rewarded:

Marty Clauw, a Bruce Township man and owner Elegant Jewelers, contacted Mayor Fouts and said he wanted to show his own appreciation for Sarder’s act of bravery.

Clauw presented Sarder with a $1,000 gift certificate to spend at his jewelry stores. The jeweler said in the past he’s been in stores during robberies when a gunman entered and the customers and employees scattered, leaving him “the only one in the store with the bad guy.”

While GM did not insist that Sarder be fired, the corporate/government giant did not rescind its “gun free” policy.  It insisted that Sarder return to work without his personal firearm, no matter how trustworthy and effective he had proven to be with it.

Here is a link to mlive video of the attack, with explanations by a Detective Chris Livingston.

It shows the changing social narrative that Governor Fouts publicly rewarded Sarder for his actions.  Such an event would have been unthinkable only 15 years ago.  The idea that Sarder, a black man of modest means, would have been able to exercise his Second Amendment rights, would have been highly unlikely under the old, “progressive” law, that seemed designed to keep black people unarmed.  Michigan was a hotbed of Klan activity in 1925 when the Michigan pistol licensing law was created.  Many believe it was designed to keep black people disarmed.

How times have changed.  Didarul Sarder has been rightfully rewarded for his courageous actions.   Police Chief James Craig, of Detroit, celebrates the ability of armed citizens to stop crime, and says that we need more to help deter terrorist attacks.

Perhaps someday, fossilized management, even in giant corporations deep in bed with the federal government, will change their polices to reflect the change in societal attitudes.
c2016 by Dean Weingarten: Permission to share is granted when this notice is included. Link to Gun Watch

@Joe,thanks for the daily spelling lesson. I think there’s a certain amount of people that spell check every article written for errors. Although it appears Mayer is spelled correctly in this article. Joe,is the punctuation and abbreviation in the article up to your standards too ?

Bill in Lexington,NC
Reply to  TEX

“It shows the changing social narrative that Governor Fouts publicly rewarded Sarder for his actions.” Up until about five years ago I used to live in Detroit. Did Michigan hold an election that I am not aware of? This is the first I have heard of a “Governor” Fouts. @Tex, leaving a spelling error in or assigning the wrong title to the Mayor shows sloppiness of thought. Covering for it simply allows mediocrity to reign. Do you want this blog to be a well-written blog or are you satisfied with clumsy construction and inaccuracies? If you want it to be… Read more »