by Major Van Harl
Your Life Hangs in the Balance

United States -(AmmoLand.com)- “Gas has been turned off, the power grid is damaged and the water is not drinkable.” – This qoute was taken from an Associated Press article about the Fort McMurray, Alberta, Canada wildfire that has shut down an entire town and endangered the third largest oil reserves production in the world.

80,000 plus people had to evacuate with only one road going south to safety.  Of course people started running out of vehicle fuel shortly after leaving Fort McMurray for the 250 mile drive to the greater Edmonton, Alberta area.

The fire had been raging for a number of days before the mandatory evacuation order was put into effect.  Why every vehicle in Fort McMurray did not have a full tank of gas in anticipation of the life saving exit south is a little disturbing.

I keep a half a dozen new five gallon gas cans on hand at all times.  If things ever get a little un-nerving in society, I will fill these cans and be ready to move out smartly.  As a matter of fact it is spring, and most of the hardware stores have sales on plastic gas cans—get some (read my Live Life On A Full Tank Of Gas – Be Happy And Prepared )

There was one road going north out of Fort McMurray to safety, but then those who chose that route were cut off completely, with only limited emergency air rescue available.  When I lived in Anchorage, Alaska there were only two avenues of escape from that town.  If 250,000 people needed to get out of town, as the next earthquake and tsunami were delivering death and destruction, a lot of Alaskans were going to die.

When I lived in Las Vegas, there were only a handful of roads in and out of that town and they all went out into the desert where there was little to no life sustaining support for refugees who may have needed to flee in a crisis.

Refugee is a good word to use in the case of Fort McMurray, but how can that be?

This is North America; there have been no refugees on this continent since the US Civil War.  Refugees are what appear in third world countries where unprepared people and unprepared governments fail to make ready for the inevitable disaster that always befalls a nation, large or small. Besides this is Fort McMurray, this is the “oil patch” where oil money, and all that that implies, flows like water.

There is no crying in baseball and there is suppose to be no refugees in the oil industry.

Please do not get me wrong I am not Canadian bashing or oil industry bashing.  In fact I have family members who work in Canadian oil and work directly in the oil sands industry of Fort McMurray.  There is a chance they have lost their home and everything they owned in Fort McMurray.  The big question on everyone’s mind is, “when can I go home to Fort Mac?”  The problem is, even if your home did not burn the electricity is out.  They saved the water treatment plant, but the piping system is destroyed in many of the locations and cannot deliver safe water in other parts of town.

I do not know if I am torturing myself or I am just obsessed with the apocalypse genre, but in the past month I have read four books that deal with the loss of the US electric power grid and the devastation that follows.  Three of the books were fiction, but the scariest of the four, was the non-fiction one.  In all four of the books the first thing to “go” was the water   ( read my What?? NO Drinking Water – Prepare Now ).

William R. Forstchen has two books out about the total loss of the US electric grid due to an Electro Magnetic Pulse / EMP that has nine out of ten Americans dead in the first year of no electric grid; One Second After (2009) and One Year After (2015).  The author C.J Box has a new book out Off The Grid, which deals with a terrorist group developing and deploying a semi-truck size EMP device in Wyoming that can be driven around the US and shoot destructive pulses at critical electric infrastructure.

These three books are fiction and have good guys who help try to save the day.  Mr. Box’s character, game warden Joe Pickett does a much better job of interrupting the terrorists and minimizing the damage to the nation.  In Mr. Forstchen’s two books, nine of your family members and friends are dead if you are still standing on day 365 after the attack—home is never the same after that.

Ted Koppel’s book Lights Out is the non-fiction and the one that really has me concerned (read my review Lights Out: A Cyberattack, A Nation Unprepared, Surviving the Aftermath by Koppel ).   He did lots of very scary research on how bad “it” will really be, but there are no heroes who swoop in, on cutting edge aircraft and save North America.  That nine out of ten people dead in the first year, is also found throughout the book and nobody ever saves the day.

Water is the first thing to go, then the ability to defend your family and what supplies you have.

The last I heard there was no concrete information on how the Fort McMurray fire was started. Fire will be used as a tool of terror in the future in North America.  I have no doubts that some of the grass and forest fires in the western states and providences in the past five years were in fact practice/training opportunities for “bad guys” who do not like us westerners (read my article Threat Assessment – Domestic Terrorism By Fire ).

I have not heard on the news or from any of my Canadian family members about any violent crimes of opportunity that befell refugees as they hurried to get out of the way of the fire.  Everyone knows Canadians are nice people, and tend not to have high rates of violent crime.  The problem is when you take away all the basic comforts of life and substitute them with chaos even nice people fail, I am sure I could.

Always refer back to the Boy Scout manual–Be Prepared; water, firearms & ammo, food and a group of like minded survivors to have your back in a crisis.

You cannot do it by yourself.  You have to have a group who is as prepared as you, that comes together in a disaster and works as a well oiled machine.

If you want to test yourself, turn the main electric breaker switch off in your house and spend a weekend without power.  Weaknesses in your alleged preparedness plan will materialize in the first twelve hours (or less).

Water, water and more pre-stored water and the ability to take containers out into the crisis and acquire additional water is the first rule of your plan.  The ability to secure and defend everyone and everything in your “group” is second only to water.

Sometimes security will rise in priority as number one—even to water.

If you are looking for something to drink and “they” sneak up and cut your head off because you failed to pay attention to your surroundings, you will not need that water.

Major Van E. Harl USAF Ret., a career Police Officer in the U.S. Air Force was born in Burlington, Iowa, USA, in 1955. He was the Deputy Chief of police at two Air Force Bases and the Commander of Law Enforcement Operations at another. He is a graduate of the U.S. Army Infantry School. A retired Colorado Ranger and currently is an Auxiliary Police Officer with the Cudahy PD in Milwaukee County, WI. His efforts now are directed at church campus safely and security training. He believes “evil hates organization.” [email protected]

I have recently read Lights Out and One Second After regardless to what event initiates the scenario the outcome is frightening! Each scenario has particular pinch points for example if an EMP you had better own a car from the mid 60’s or all the gasoline storage won’t matter. The chaos rioting decay will be worse in cities. Have a plan and act early, and oh your money will be worthless as well thanks to our electronic/digital world.

Good Article
Guns are cool but you can’t drink or eat them. I know some bravado will come out with statements like “if I got a gun I can eat and drink” but your wrong cause them folks got guns too.

If you have warning, and are not bugging out, look at getting a waterBOB Emergency Drinking Water Storage (100 Gallons) for every bathtub in the house. 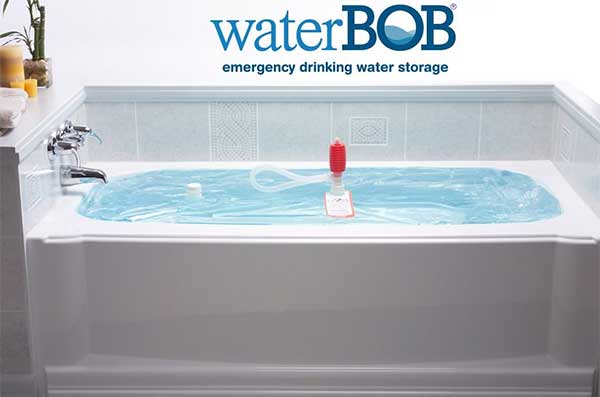 I read One Second After, Lights Out and another book dealing with catastrophic national financial collapse. Patriots by Rawles is another entertaining novel that is full of how to information. I just got two of the waterBOB bathtub water bladders the other day SG had a clearance sale. Dehumidifiers suck lots of pure fresh water out of the atmosphere as long as you can get electricity.