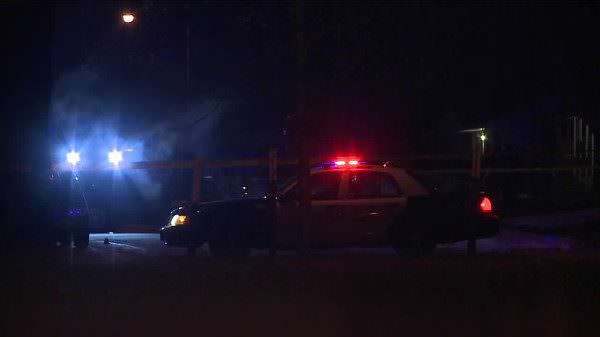 Image from Fox6now.com 63rd and Euclid in Milwaukee

It was a dark and cold winter night on Tuesday, 27 December in Milwaukee, at 10 p.m. The sun had set more than three hours ago. There was no moon, but there was a cold breeze. The temperature held at 23 degrees. The blustery wind of the afternoon had dropped off. A 36-year-old Milwaukee resident was walking his dog in a secluded neighborhood. Street lights were far apart.Two teenage criminals were in a car, cruising for trouble. They found it. The armed teens attempted to rob the man. He had a concealed carry permit, a handgun, and fought back. One of the teens was killed, the other, seriously wounded, fled in the car back to the scene of a previous shooting. From Fox6now.com:

Police say their preliminary investigation reveals Thomas was attempting to commit a robbery at the time of the shooting and was shot by the 36-year-old Milwaukee man who was being robbed — who was out walking his dog on Tuesday night. That man is being questioned by investigators. He has not been arrested, and police say this case will be reviewed by the Milwaukee County District Attorney’s Office in the coming days.

The man has a concealed carry permit.

Officials also say Thomas’ co-actor, an 18-year-old Milwaukee man, was also shot during the altercation. He apparently went to the neighborhood near 24th and Ruby after the incident — and has since been taken into custody.

Police Chief Ed Flynn, a transplant from Massachusetts and New Jersey, says a big part of the Milwaukee homicide problem is concealed carry permits.   From the postcresent.com:

“What we’re seeing are more guns on the streets,” the chief told USA TODAY NETWORK-Wisconsin. “I can tell you anecdotally we’re seeing a number of shootings involving concealed carry permit holders — many of whom have extensive criminal records — but I’m not allowed to tell you how many or whom, because the law has been carefully written to prevent analysis of that information.”

Chief Flynn conveniently leaves out the fact that only one Wisconsin concealed carry permit holder has been convicted of a homicide, and he was convicted of manslaughter by a jury. He pled self defense. I am certain that if any other unjustified homicides had been committed by concealed carry permit holders, the information would have been leaked to the media.But Wisconsin concealed carry permit holders are incredibly law abiding, like the permit holders in other states. The statistics show that CCW holders are more law abiding than police officers.Milwaukee homicides may break the record set in 1993 this year. There were 160 homicides that year. The rest of Wisconsin typically has 37 homicides in a year.  Milwaukee seems to be on track to do so. We won’t know until the end of the year.  There were a number of self defense shootings in Milwaukee this year. They are included in the unofficial site totals.Chief Ed Flynn has said that another problem with minority neighborhoods in urban centers, is that they do not trust the police.

In “disadvantaged communities of color,” he noted, “crime has not gone down. It’s gone down in some place called America. But in those neighborhoods, there’s easy access to firearms… and there are extraordinary rates of homicide. Nationally, African Americans represent 51 percent of homicide victims. In our cities it’s more like 80 percent.

“It’s an urban tragedy. But the heart of the police dilemma is those neighborhoods that demand our services, need us the most, request us the most, depend upon us us the most, for social or historical reasons, distrust us, and… we can’t protect them effectively if we’re not trusted.

Chief Flynn is right about the problem being a lack of “trust of the police”. You do not prove to people that you trust them by disarming them. From Machiavelli: From “The Prince”:

There is no comparison whatever between an armed and disarmed man; it is not reasonable to suppose that one who is armed will obey willingly one who is unarmed; or that any unarmed man will remain safe…. – Niccoló Machiavelli, The Prince. 1537.

You do not foster trust of the police by claiming they are racist monsters who are looking for chances to gun down innocent black men. That meme has been implicitly pushed by President Obama and the establishment media with the whole “Black Lives Matter” propaganda. It is what has caused the Ferguson Effect, where police, repeatedly attacked by the media and “progressives”, (but I repeat myself) pull back from violent neighborhoods. In those neighborhoods, the murder rate has skyrocketed.Milwaukee Chief Flynn seems to prefer that the innocent 36-Year-Old Milwaukee resident be a good little victim, and submit to whatever the teen criminals demand of him. The good citizens of Milwaukee disagree. In a quick review of the 80 comments at the article reporting the shooting, I could not find one that agreed with that view.  This one was typical:

They got what they had coming to them. Good job to the robbery victim. This is why i am for carrying

About Dean Weingarten;Dean Weingarten has been a peace officer, a military officer, was on the University of Wisconsin Pistol Team for four years, and was first certified to teach firearms safety in 1973. He taught the Arizona concealed carry course for fifteen years until the goal of constitutional carry was attained. He has degrees in meteorology and mining engineering, and recently retired from the Department of Defense after a 30 year career in Army Research, Development, Testing, and Evaluation.

Actually read all the comments. 100% in support of the shooter.

You folks in Milwaukee need to get off your duff and get rid of both Barrett and Flynn. Stop letting lying leftists steal your rights from you. IT TAKES WORK, BUT IF YOU DON’T GET OFF YER FANNIES, IT AIN’T GONNA HAPPEN. Get with it people. Run those two pukes outta town on a rail.

Good for people that protect themselves and family members. Milwaukee is a bad place to visit and live.

Keep in mind that the term “homicide” refers to the death of a Human caused by another. The term thus includes all justified killings, by police and civilians, accidental killings, negligent killings (also called “manslaughter”), as well as murders. If the homicide rate DID increase, it would be crucial to know what kinds of homicides increased. For example, if justifiable self-defensive homicides had gone up, that would probably be a good thing.

The city police chief is some kind of stupid. I don’t believe he would know a real homicide if it fell in his lap. The citizens of Milwaukee would be better served if they combined the Sheriffs Office and the Police Department and appointed Sheriff Dave Clark as the leading law enforcement officer in charge. The problem is when Sheriff Clark retires they would probably be stuck with some moron like Flynn. If the city does not get rid of Flynn and the leadership in the prosecuting attorneys office they will end up like Chicago, Newark and other democrat run… Read more »

Perish my thought but I’d guess this chief’s position is a direct reflection of his boss, Mayor Tom Barrett. And I’d guess Barrett’s position is a direct reflection of his (ahem) benefactor, none other than Michael Bloomberg. Seems Barrett belongs to the elite one percent of all mayors who also are members of Bloomberg’s flagging organization, Mayors Against Illegal Guns (MAIG). We don’t hear much about MAIG anymore, now that Everytown and Moms Against get most of Bloomberg’s largess. I wonder if all those MAIG criminals are out of prison yet.

It seems that when this “Sherriff was hired he brought his New Jersey and Massachusetts gun attitude with him. There is no need for such an attitude in a state where concealed carry is the norm. Sherriff Clark is totally right to blast this lib Sherriff. If he was elected by the people All I can say is “stupid is as stupid does”.

This is why we ALL carry.

If gun control works so well why does Russia have a high murder rate? Oops!
https://en.wikipedia.org/wiki/Crime_in_Russia#Murder

What matters are the social dynamics that drive crime not access to guns. If access to guns were the problem the US would have the worlds highest murder rate, it doesn’t. US murder rate is below the world average.
https://en.wikipedia.org/wiki/List_of_countries_by_intentional_homicide_rate

It never ceases to amaze me. One lousy city in IL has had more murders this year than the whole State(Florida)where I live. Even with our large tourist and transient population, we still less crime than that lousy city on lake Michigan. That’s because we carry guns and can use them.

I’m sure that Sheriff Clarke, also from Milwaukee, would vociferously disagree with Flynn.

from “Sheriff Clarke Responds To Blaming Concealed-Carry Permit Holders For Milwaukee Homicides” article on gunsinthenews.com: This anti-gun liberal is doing what liberals do best. Blame the law-abiding citizen for incidents of violent crime. He knows no shame as he manufactures fake news about concealed-carry permit holders. To date, Milwaukee has had 138 homicides, compared to 145 in 2015. This is one of the highest per-capita homicide rates in the country. Many of these are senseless killings in drive-bys; drug- and gang-related incidents; instances of domestic violence; and innocent people becoming caught in a crossfire. You can count on one hand… Read more »

I do love that Sheriff Clark. Must be a comforting for the citizens of Milwaukee to know that they have a mentally ill person (Flynn) in their sheriff department.

I agree with Clarke disputing Flynn. Another anti-gun lib in office. Wake up and smell the criminals, not law abiding gun owners.

“The rifle itself has no moral stature, since it has no will of its own. Naturally, it may be used by evil men for evil purposes, but there are more good men than evil, and while the latter cannot be persuaded to the path of righteousness by propaganda, they can certainly be corrected by good men with rifles.”

“An unarmed man can only flee from evil, and evil is not overcome by fleeing from it.”
….. COL. JOHN DEAN “JEFF” COOPER