By John Crump
John gives us a first-hand review or the Asylum Weaponry Gatekeeper II Weapon.  All images courtesy of Elk County Ammo and Arms.

This means going through the whole NFA process of getting a tax stamp before being able to take it home.

The main reason I haven’t is the 9 month to a year waiting period to get the tax stamp issued by the BATFE. Even Though an AOW tax stamp is only $5 it still so far has prevented me from checking that box off on my bucket list of guns to own. Another reason I haven’t pick one up is that I have several tax stamps going through the process right now and I didn’t feel like getting the prerequisite fingerprints and mugshots again, but I have come to find out there is another way to get a short shotgun like firearm.

Lucky for me and many other people who want an AOW shotgun there is a Option.

I decided that I needed to pick up one of these firearms for my job as a firearms writer and see how it would perform for the readers of AmmoLand New (at least that is what I told my wife). There are many of these firearms on the market to choose from. Black Aces is the one most people are familiar with. There is also the Mossberg Shockwave which is built on a Mossberg 500 receiver. I decided to settle on the Asylum Weaponry Gatekeeper II which is built on a Remington 870 receiver.

My choice mostly came down to price.

The original Asylum Weaponry Gatekeeper was based on the venerable Mossberg 500. With the Gatekeeper II, Asylum Weaponry decided to go a different direction and use the Remington 870 receiver. You can’t go wrong with either of these shotguns. Both are known for their reliability and long history of use in law enforcement. In fact these two are the two most popular shotguns in service with police departments around the country.

The Asylum Weaponry Gatekeeper II Weapon comes with a 14 inch barrel and a Raptor like grip. The Raptor like grip is used to get the firearms above the legal minimum size of 26 inches. The firearm ends up being around 26 ½ inches long. This is a very manageable size and about 7 inches longer than the AOW Serbu Super-shorty shotgun.

There is an advantage that the Asylum Weaponry Gatekeeper II has over some of the AOW shotguns on the market other than not having to to register with the BATFE, waiting 9 months before taking it home, and paying a tax stamp. That advantage is that the magazine tube is not cut down or modified in any way. A lot makers of AOW shotguns will modify the magazine tube which causes a lack of capacity. The Gatekeeper II has the full 4+1 capacity.

There is a single bead sight on the barrel of the Gatekeeper II. This will be good for short range shooting, but not good for long range shooting. Since this isn’t a firearm that most people will shoot skeet with or use for hunting, the sight should be sufficient. One of the upgrades I am planning on doing is installing a Weaver Shotgun Rail and adding a Red Dot Sight.

Racking the slide on the Gate Keeper II was smooth like on any other Remington 870. The shell loaded smoothly as well. With some AOW shotguns I have fired the racking wasn’t as smooth as I felt it should be. I think this might be due to the modifications that are done to a lot of AOW shotguns.

I held up the Gatekeeper II and braced for the kick of firing 12G slugs. I slowly pulled back the trigger sending the slug down range. The kick was massive. This isn’t the firearm you would give to someone who has never fired a shotgun before. I racked another shell and fired again and was hit with the same massive force.

After 4 rounds my wrist was aching. There was tingling running up my arms from the kick from the Gatekeeper II. This kick wasn’t a surprise and was about what I was expecting. This was about the time I would have really liked to have a pistol grip. I think with a pistol grip it would have made the kickback more manageable.

This isn’t Asylum Weaponry fault. It is the stupidity of some of our nation’s gun laws.

The Asylum Weaponry Gatekeeper II isn’t a firearm for everyone and does have limited use, but if you are buying one of these “AOW like” firearms then you are probably know this fact. It does make a good truck gun due its small size. It would also be good in close quarters situations due to the short barrel.

The one fault I do have with the Gatekeeper II is purely cosmetic. On the side of the firearm where it says “Gatekeeper II” it was very faded. It is almost to the point where it is unreadable. I had to hold it up to a light and angle it to read the markings. Other than that the Gatekeeper II is a great value compared to the other “non-NFA firearms” on the market.

If you don’t want to wait for a tax stamp, and you don’t want to jump through the hoops of the NFA then this might be the firearm for you. All in all it is a fun gun that I don’t see myself getting rid of for awhile.

Asylum Weaponry can be found at https://www.asylumweaponryllc.com/

I can see this as a purpose gun, like a truck gun or a lightweight camp gun.

Remington 870 Tac-14 and Mossberg 590® Shockwave are also great shotguns which are not SBS. It is good to see interest to old shotguns in new look. Also, you can get many more upgrades for the 870: ww w.rem870. com

I am quite happy with my DP-12. I don’t feel the need to get any other shotgun for personnel defense. 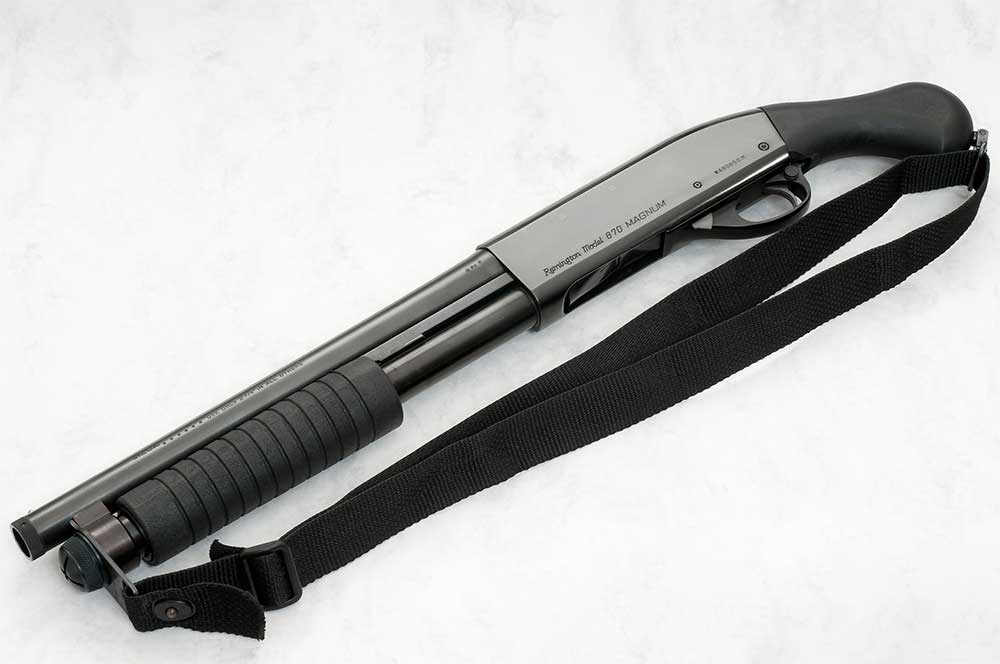 I`m quite fond of my ‘870’ with it`s 7 shot extension under the 20″ slug barrel, and Side saddle. It sleeps beside me. I sometimes partially wake at nite and caress it. I keep it w/hammer down and 2 rd.s oob, in mag.. I can but imagine the anxiety and subsequent uncontrolled bodily functions of an unfriendly kicking in my door, when they hear the pump action of ‘baby’.

ita a ffen shotgun if it fires shotgun shells, get over the alfibet soup

My pistol grip Mossberg 500 has an 18.5″ barrel, holds 5+1 and has an over-all length no greater than these “AOW-like” shotguns. So what’s the point?

Would it be legal to add a full shoulder stock? The over-all length would be over 27″ and you’d enjoy a 4″ advantage over a similar gun with the 18.5″ barrel.

Once you add a shoulder stock it automatically becomes a SBS. That is a $200 tax stamp NFA item