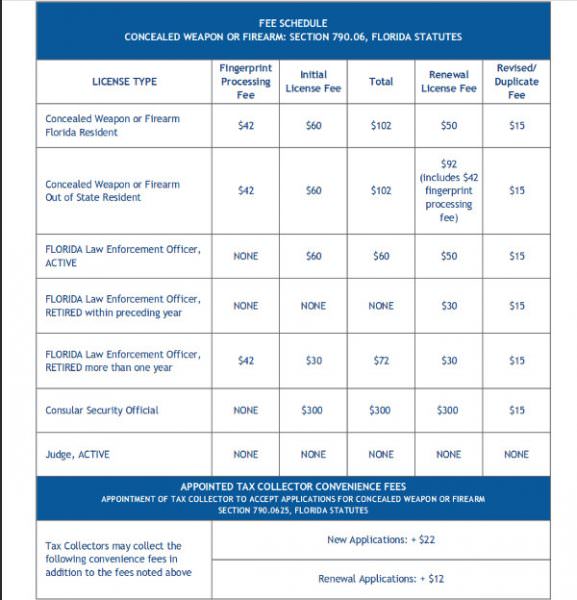 Arizona -(Ammoland.com)- As of 1 July, 2017, the fee for obtaining a Florida Concealed Carry Permit has been reduced by $5.  From cbemeraldcoast.com:

Florida residents will save $5 on application fees, down from $60 to $55, and renewal fees, down from $50 to $45, according to the Florida Department of Agriculture and Consumer Services. Active law enforcement officers, correctional officers and correctional probation officers can now obtain a new license for $55 and renew their licenses for $45.

The new fees have not been listed on the pdf fee schedule at the Florida Department of Agriculture, yet.  The fees listed show a fingerprint fee of $42, license fee of $60, for a total of $102 for the initial license.

An applicant also must provide a passport type photograph for a few more dollars. Passport photographs as Walgreens and CVS cost $12.99.

With the $5 reduction in fees, a Florida permit can be had for $109.99, and the cost of sending in the application, fingerprint card, and photograph. Judges get there CCW for free, and Florida police and retired police get discounts, as shown in the chart. Florida expedites the processing of permits for active duty military and veterans.

When I had my fingerprints done in Arizona, they cost $3 per card. The deputy sheriff who did the fingerprinting was friendly and helpful.  The Florida permit is a popular second permit. As of June 30, 2017, there were 224,053 out of state permits, From a total of 1,784,393 total permit holders. Thirty states will honor the Florida permit issued to an out of state resident.

Research from the Crime Prevention Research Center indicates that the higher the costs to obtain a concealed carry permit, (or in a few states, license to carry)  the lower the percentage of people who obtain the permit or license. From crimeresearch.org:

Each $10 increase in fees reduces the percent of adults with permits by about a half a percentage point.

All across the nation, the number of carry permits is increasing. In some states, such as Indiana and South Dakota, the number is near 15 percent of adults. Because of the requirements to obtain a permit, virtually all permit holders are eligible to vote. I would expect the vast majority of them to actually vote. That means that permit holders make up to 30 percent of people actually voting.

Permit holders are becoming a significant voting block. In many swing states, such as Michigan, Wisconsin, Ohio, Pennsylvania, Florida, and Arizona, the Concealed Carry permit holder may be the swing vote that decides elections.

I would be more than happy to pay Florida’s ccp fees, even if they raised them five bucks, and I would pay up with a smile on my face. Where I’m from the ccl class was north of 200.00 bucks, and the electronic fingerprints were 65.00 and the license is good for five years, but the renewal fee is 150.00 bucks.

Ammoland took my post down because, I guess, they didn’t like the idea that I pointed out that judges don’t have to pay any fees. FIRST AMENDMENT, ANYONE.

Become a judge and there is no fee. Sounds like it is a pass through for a judge with no prints, etc.
What a deal.

Utah non-resident, which covers the same States, except FL, cost $15 for a renewal that can be done completely online!

And we have to pay taxes and fees to exercise our constitutional rights because………? When will freedom of speech start getting taxed? Or taxed to hire a lawyer? Or vote?

You want to know when the gov’t will begin taxing sex, or your ‘right’ to vote?
Just as soon as they recognize that they can