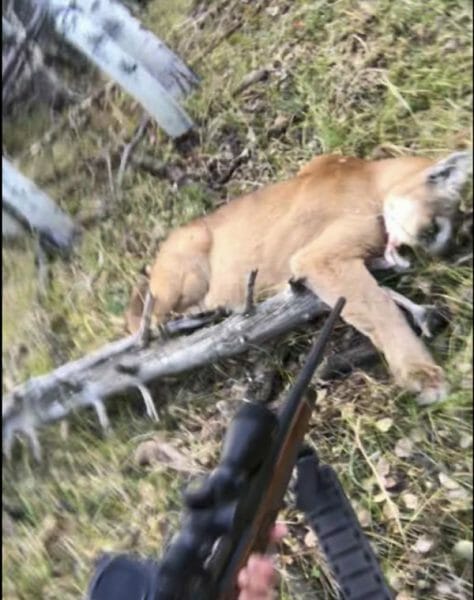 Arizona -(Ammoland.com)- Dylan Ross, of Montrose, Colorado, was in the woods, hunting mule deer on 5 November, 2017. He was sneaking through the woods, a little after daylight, when he heard a noise. He turned to his left, and saw an adult mountain lion up hill from him, less than 20 feet away.

As he shouldered his rifle, the lion hissed and took two steps toward him. He fired, but the lion kept coming, and he shot a second time. That stopped the lion.

There are two videos at Dylan’s facebook page. After reporting the shooting, he went back up the mountain and shot a very nice Mule Deer.

Words can’t even describe my hunting experience yesterday. I was and hour over a vertical mountain before it got light. I got to the other side and was sneaking through the timber then suddenly I hear something to my left. I turned and it was a lion! No more than 5 yards away. Right when I turned she hissed and came at me. I killed her at 8 steps away from me. It’s One of the scariest things that’s ever happened to me. I took these mountains for granted. All the way down that mountain all I could think about is I was one moment away from never seeing my family and my 2 little girls again. I killed the lion at 7:34 A.M. then came all the way back down that mountain. I reported it to DOW, I showed them all the video evidence and gps coordinates and they said it was all legal. Unfortunately I wasn’t able to keep the lion.

So after all that mess I went back to hunting around noon still shaking like a dog from the lion. I just kept recalling that lions hiss ten steps away it was like sneaking through the woods and stepping near a 120 pound rattlesnake. Anyways I shot up the mountain to one of my favorite spots and bam there was buck right when I got there. I didn’t count points I just knew he was big enough and POW he was dead. This all happened at 130. I couldn’t figure out what the hell happend!!!! A lion tried to kill me 6 hours ago, now here I am sitting next to the nicest buck I’ve killed. I’m very thankful for November 5th, I’m also thankful for DOW Matt I didn’t get his last name, and most importantly to be alive and enjoy my family and friends and be able to share this story with them and you!!

All I can say is watch out, I thought I was the hunter and I was being hunted. I’ve never felt fear like a lion coming at me and killing it 8 steps away. She was aged at 4 or 5 years. My buck was 26” wide and 203 pounds dressed.

Dylan is obviously an experienced, competent hunter.  The big cat was a 120 lb female. A hundred and twenty pound cat is a deadly threat.

The videos that Dylan took at the scene make it clear what happened. A lion coming at you from less than 20 feet away is not a lion that is avoiding humans.

The videos and pictures taken at the scene also so the power of digital media as a way to protect your freedom. Digital recorders are becoming as important to your Constitutional rights as the access to arms protected by the Second Amendment.

Lions and bears are the top predator in teh forest and rivers adn mountains. When they were hunted regularly they learned to avoid people.
Now they have learned that humans are a food source whether it is garbage at a camp site or backyard. Pet dogs are an easy snack. We man not have man-eaters but it isn’t unusual to read of a jogger or cyclist killed in the suburbs of Denver or Aspen.

I have hunted in many states and in Canada. I have encountered cougars in AZ, NM, ID, CA and Canada. Most of the times the cat had me in their sights before I spotted them. They are by nature very good and stealthy hunters. Being aware is good but when in their country they have the upper hand except in snow. The snow will alert us of their presence. We must always remember a cougar usually attacks from behind and we don’t have eyes back there. This hunter was lucky, damn lucky to have spotted the cougar before a full… Read more »

Obviously not an experienced hunter, allowing himself to be in proximity to the feline. Many surrounding cues can tell you what’s out there, from other animal behavior, smell, surrounding cover, etc. Sounds like a wannabe hunter taking the beautiful cat “by accident”. Just what we need, more ignoramuses depopulating wild animals in a world where 7 billion biped nature destroyers are killing, consuming and polluting, their way through this planet.Guns are not for hunting my hero. They’re for resisting the bipeds who would enslave you. Wait ’tilll they put you through their legal meat grinder just for owning that tool.

WTF do you know about the exact circumstances in this case?
Absolutely nothing outside of what you read here.
You appear to be the ignoramus & wannabe internet expert.
Go back to whatever ‘anti’ site you belong to.

So, you’re saying an experienced hunter could not be surprised by a mountain lion? That’s simply not true or even logical.

You are so ignorant. Hoping you are not an educator or a foster of offspring.

Obviously, this guy is the one without any experience. Under the right circumstances, any animal can be walked up on at close range.

Get out of here you liberal pussy bearing man wanna be a woman.

I see you edited it out. Delete my comments then