Arizona -(Ammoland.com)- Governor Michelle Lujan Grisham of New Mexico claims that background checks are Constitutional. In the Heller decision, Justice Scalia wrote that regulation of commercial sales was deemed Constitutional. The regulation of private sales has not been reviewed by the Supreme Court, to my knowledge. The Supreme Court has ruled the federal government cannot force the states to conduct background checks, at least, not without paying for them. It seems unlikely a state could require the federal government to perform background checks for that were not required under federal law.

Governor Grisham seems to have a problem with numbers: 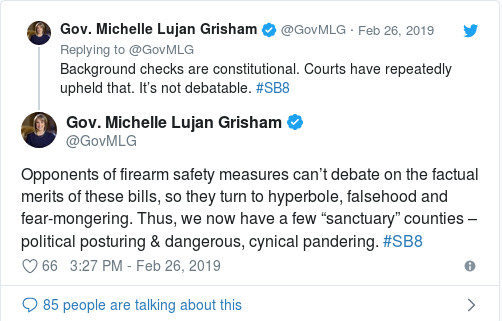 New Mexico has 33 counties. About two-thirds of the counties in the state have passed Second Amendment sanctuary resolutions.

Ruidoso News has published there were 21 counties of the 33 in the state that had passed Second Amendment sanctuary resolutions as of 26. From ruidosonews.com as of 26 February 2019:

About two-thirds of the counties in the state qualify as more than a “few” in my dictionary.

As shown in the map at the top, the New Mexico Shooting Sports Association counts 23 counties as having passed Second Amendment sanctuary resolutions.

On 22 February 2019,  Sheriff Tony Mace of the New Mexico Sheriff’s Association said  29 county sheriffs were in favor of passing Second Amendment sanctuary city resolutions. Only three counties were against the resolutions. They were: Bernalillo County, Dona Ana County, and Santa Fe County.  All three are where the urban population centers are located.  From koat.com:

Cibola County Sheriff Tony Mace is on the board of the New Mexico Sheriffs’ Association. He, along with 28 other sheriffs, are trying to pass or have passed resolutions to not require their deputies to enforce the gun bills that are before state lawmakers.

“We have 29 sheriffs stand up and speak in (the) Legislature, saying we don’t support these bills. It’s not what we want. They don’t help us in our day-to-day jobs,” Mace said.

Mace said many of the proposals are unenforceable, unconstitutional and do not help protect the people in his community.

Benalillo County has Albuquerque, Dona Ana County has Las Cruces, and Santo Fe County has Santa Fe.  One county had not been contacted, Los Alamos Count. It is the smallest county in the state.

This may create problems for the Democrats in New Mexico. Some of the counties on the sanctuary list are strongly registered, Democrat.  From abqjournal.com:

Rio Arriba County is largely rural like other counties on the “sanctuary” list, but stands out because of its strong blue tint politically — 75 percent of Rio Arriba registered voters are Democrats.

The Rio Arriba resolution says the commission affirms its support for “decisions by our sheriff to not enforce any unconstitutional firearms law against any citizen” and that no county resources should be used to enforce any law “that unconstitutionally infringes on the right of the people to keep and bear arms.”

BE IT FURTHER RESOLVED that this Board will not authorize or appropriate government funds, resources, employees, agencies, contractors, buildings, detention centers or offices for the purpose of enforcing a law that unconstitutionally infringes on the right of the people to keep and bear arms.

It remains to be seen if the discontent with Democrat New Mexico gun control activism will translate into the loss of Democrat seats in the legislature.

There is only one way to insure we maintain our liberties and it is to vote Republican. With these actions the democrats show they cannot be trusted.
Ask yourself this one question, What do you think the democrats have in mind for us when the very first thing they address is disarming the population. Why do they feel it necessary that the first thing they have to do is to come and disarm us, to come into our homes and take our guns? Why would they want to do this?
Ask yourself and write back with your answer.
Thanks, RiNM.

Criminalizing the law abiding is and will never be the answer to stopping crime.

Spelling. Check before you post. Please. We need to appear to know how to write a decent post.

I live in AZ. We have Constitutional Carry here and the Republicans control both legislative chambers and the governorship (altho he’s a total RINO). With the illegal Mexican and Califruita infestation, the state house is 29-31, Demo/GOP, which is the frailest lead the GOP has had in 20 years. We are about to be flipped blue!

Keep up the good fight there. We will, too.

21 of 33 counties is way more than a few. Proving this “thing” as governor is another democrat that doesn’t know what she is talking about. She needs to find out what is going on in her state.

All but 3 Sheriffs in New Mexico have openly stated that they will NOT enforce the draconian anti-gun laws passed by the Santa Fe Sissy legislature and signed by the 2-bit liberal bought and paid for Governor. Like most other states, New Mexico is controlled by the largest cities and leaves the majority of its population, located in small towns and rural areas, out in the cold. Bottom line soon to come; venture out of the comfortable liberal city environment and try imposing your twisted laws and immorality upon the country folks at your own risk and see what happens.

I used to live in Colfax County, friggin’ dump except for Angle Fire and the western part. Not sure why they didn’t get their act together having the Whittington Center and all. Weak sacue.

I’ve read the new demoncrap governor of New Mexico is another gun hating politician. Oh and she’s for open boarders to let all of her brothers and sisters in from south of the boarder. So instead of working on fixing up roads, schools, increasing jobs, her number one priority is more illegal gun control and open boarders. The only reason for so called background checks is to get a government list of all gun purchasers and the guns they are buying so the government will have a list to confiscate all guns. Background checks =gun registration = gun confiscation =… Read more »

From what I have read/heard the Sheriff is the ultimate protector and enforcer of any law. We need more sheriff’s standing up against these UNCONSTITUTIONAL so-called “red-flag” (communism is always portrayed as red) laws. They are also elected officials and we need to know which ones are 2A supporters in action rather than words. We’ve seen over the last few decades who is a true 2A supporter and who mouth the words but fail to act.

Hey Dean, is there anything we/I can do for Coconino county? Other than outright replace the board of supervisors? The pouchouli is getting thick up here on the Mtn.

It’s great to see the people stand with the Constitution.

Ok…… so it’s fine for cities to become a sanctuary for illegal aliens, a real federal law. When a county wants to ignore a FAKE law that is unconstitutional thats not ok. I got it now, what you have to do is hit yourself in the head with a hammer until you almost pass out , then you can understand the dummycrat mindset. Their hypocrisy knows no bounds.

McKinley County has passed this Legislation as well.

The Los Alamos country council has been attempting to defend its Sherriff’s Office as unnecessary and redundant. (LA the county = LA the town, boundary-wise.)

The LA country council has a reputation for, and history of, ignoring the wishes of its citizens.