U.S.A. –-(Ammoland.com)- Lee Armory has come out with a new AK variant rifle. I was able to get my hands on one to put it through its paces.

Lee Armory is importing the parts for their new AK from the famous Cugir Arms factory in Romania. The ROMARM Cugir Arms factory has a long history dating back to 1799. The factory is most known for producing the WASR rifles sold by Century Arms International.

The Lee Armory M10 reminds me of a lot of the WASR rifles but with multiple upgrades. That shouldn’t come to a surprise since the WASR, and the M10 use parts coming from the same Romanian factory.

Lee Armory gunsmiths converted the magwell to use double-stack magazines. The stock 30-rd magazine that Lee Armory included with the rifle worked great. I have a WASR at home that has issues with Tapco magazines, so I keep a few different brands around for testing AKs that I review. I tried the Magpul, Tapco magazines, and some surplus magazines and they all worked well.

The M10 I received from Lee Armory came with a polymer stock and a polymer handguard. I would have preferred the classic wood look, but I can easily change out the accessories without too much work.

One thing that separates the Lee Armory M10 from the WASR is some of the parts used on the AK to keep it 922r compliant. Section 922r of US Code, Title 18 deals with the percentage of parts that has to be made in the U.S.

Things like handguards, barrels, buttstocks, and pistol grips all fall under this regulation. It can get confusing, but no more than half of the 20 listed parts in code can be foreign made. The rest has to be American made. Some companies will go for cheaply manufactured parts to stay 922r compliant, and other companies will use high-quality parts.

Gone is the standard AK slant muzzle brake. Lee Armory decided to go with a Tacfire compensator. This linear compensator is another part that is produced in the United States. It does a great job at directing the sound downrange. It also looks a hell of a lot better than the standard slant brake. Looks aren’t everything, but will earn the rifle extra credit. 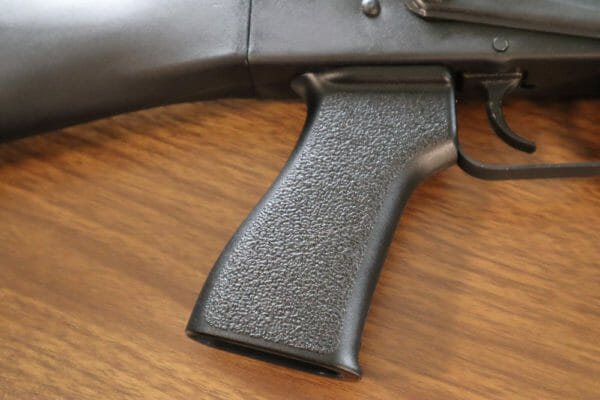 It is also no secret that I am a big fan of the XTech Mag47 magazines. That is the only AK magazines I use for my AKs outside of testing. The M10 comes with an XTech magazine. The quality of the XTech magazines are some of the best in the market, but I wanted something a little flashier than the standard black Mag47.

Lee Armory could have cheaped out on the magazine and went with a cheaper brand, but the fact that they didn’t go with a lesser brand shows that they want this AK to be a success. I am not saying there aren’t other good magazines, but XTech built the Mag47 like a tank.

I picked up an XTech “Yellow Banana Clip.” It is the same magazine that Lee Armory includes with the M10, but with one big difference. This magazine is bright yellow. It may not be the most tactical looking magazine on the market, but it is a conversation starter on the range.

I spoke to a rep from XTech about the use of the term “clip,” and their answer was a yellow magazine is ridiculous, so why not give it a ridiculous name?

Lee Armory used an RPK style leaf sight for the rear sight. This sight lets you adjust for distance. The Soviets designed the RPK as a light machine from the same program that gave us the AK-47. The RPK sight is superior to the original AK-47 sight, so a lot of manufacturers use that sight on their AK variants.

On the front sight, Lee Armory went with a customized sight. The sight works well with the rear RPK sight enabling me to put rounds on the target. It isn’t an earth-shattering change to the accuracy of the AK, but the M10 is damn accurate.

The fit on the M10 is pretty good. One issue I have found with other AKs is things like the front sight being canted, failure to eject, and other problems that seem to be tied to whoever assembled the rifles stateside.

I am happy to report that common issues that users might find on other AKs from the Cugir Arms factory were not present on the M10 that I tested. The gunsmiths at Lee Armory know what they are doing. I took out my WASR and the M10 so I could compare the triggers. I really couldn’t tell the difference. If you have fired a WASR with a RAK-1 trigger than you know what the M10’s trigger feels like when shooting. I was going to drop in an aftermarket trigger, but in the end, the trigger was good enough for me to keep it stock.

I took the M10 on six trips to the range over three weeks. Each time I put six magazines of steel cased ammo through the rifle (thankfully my indoor range allowed me to shoot steel-cased ammunition). I didn’t clean it in between trips, and I didn’t have a single failure. Granted 1070 rounds isn’t a huge sample size so I will keep testing the rifle.

I really don’t have too much to complain about when it comes to the Lee Armory M10 — coming from stamped parts from the Cugir Arms factory it has the pedigree of a Romanian AK. The US-made parts on the rifle were great choices right down to the magazine.

Usually, I send back the firearms after testing, but I am buying this one!

Readers can find out more about Lee Armory at www.leearmory.com

John is an NRA instructor and a constitutional activist. He is the former CEO of Veritas Firearms, LLC and is the co-host of The Patriot-News Podcast which can be found at www.blogtalkradio.com/patriotnews. John has written extensively on the patriot movement, including 3%’ers, Oath Keepers, and Militias. In addition to the Patriot movement, John has written about firearms, interviewed people of all walks of life, and on the Constitution. John lives in Northern Virginia with his wife and sons and is currently working on a book on leftist deplatforming methods and can be followed on Twitter at @crumpyss, on Facebook at realjohncrump, or www.crumpy.com.

Cool write up John. I’ll have to try a XTech mag. I use Magpul mags with my WASR without issue, and the rifle itself has never had a failure – the WASR is one of the most reliable AK variants on the market. Tapco mags are junk in my opinion – I have been unable to get them to function reliably in any rifle. I do love my WASR, it has many of the same upgrades as your M10. A truly wonderful and capable battle rifle.

How’s the shorter sight radius work out with these? O always assumed these to be SBR candidates awaiting approval,but I wonder if there is any good options (Tech Sights,or a dogleg rail to accommodate a rear aperture sight further back?)to get that longer radius?

Cut crown and put a hobo break on that. That yellow mag is just wrong! Must be overstock from the minion order.