Arizona -(Ammoland.com)- One of the lesser known, but informative actions of the First World War, was an attack, by Muslims, on a picnic train of unarmed civilians in Australia. The attack killed four civilians. A quick response by police, soldiers and civilians killed the two attackers after they took up a defensive position on a nearby hilltop at Broken Hill, in New South Wales.

A day after declaring war on Germany, on 5 August 1914, the British confiscated two nearly completed Ottoman warships in British yards. The ships had been paid for by donations from Ottoman subjects. The Prime Minister of the Ottoman Empire, Sait Halim, was outmaneuvered by the Minister for War, Enver Pasha. Enver was able to engineer an attack on Russian naval forces in the Black Sea, on 29 October 1914. In addition to military targets, 14 civilian ships were sunk. Russia declared war on the Ottoman Empire on 2 November 1914.

On 14 November 1914, Sheikh-ul-Islam, declared an Islamic holy war on behalf of the Ottoman Empire. He called on Muslims all over the world to rise up in Jihad against the enemies of the Empire. From history.com:

The sheikh’s declaration of a holy war, made two weeks later, urged Muslims all over the world–including in the Allied countries–to rise up and defend the Ottoman Empire, as a protector of Islam, against its enemies. “Of those who go to the Jihad for the sake of happiness and salvation of the believers in God’s victory,” the declaration read, “the lot of those who remain alive is felicity, while the rank of those who depart to the next world is martyrdom. In accordance with God’s beautiful promise, those who sacrifice their lives to give life to the truth will have honor in this world, and their latter end is paradise.”

Australia was part of the British Commonwealth, although it had been self-governing as a nation since 1901.  At least two Muslims in Australia listened to the call to Jihad and took it seriously.

They plotted an attack on a picnic train of Australians. The train was a holiday celebration of 1 January 1915. The picture is of the actual train, shortly before the attack. The picture timing was verified by the distinctive automobile, its tires, and by a woman who was on the train and in the picture.

The two Muslim men used an ice cream cart (owned by one of the men, Mullah Abdullah) to transport their rifles unobserved, into position for the attack. They opened fire on the train, killing three people and wounding four others. People on the train recognized the two men. The first thoughts were they were firing blanks in celebration. Reality set in with wounds, blood, and death. The train stopped about 850 meters (930 yards) down the track but continued to come under fire until it was moved a further 1200 meters (1300 yards) away. From nsw.gov.au:

Mullah Abdullah and Gool Mahomed had fled the scene on foot heading in a northeast direction where they knocked on the door of a house near the Allendale Hotel on the corner of Jones and Morgan Streets to seek refuge. Some words were exchanged between the two men and the resident, 70-year-old Thomas Campbell, which resulted in one of the men firing a shot at Campbell with the bullet passing through the side of his abdomen (Campbell survived). By this time the police had arrived and Abdullah and Mahomed ran off heading in the direction of their cameleer's camp and as they neared the Cable Hotel the two men came under fire from mounted Constable Robert Mills. Shots were exchanged between both parties and Constable Mills was injured, taking two bullets, one to the thigh and one in his groin. The police were forced to pull back and continue their pursuit from a distance enabling the two men time to take cover at a rocky outcrop of white quartz (White Rocks). Military men from the local base along with men from the rifle club joined in the combat. Police Inspector James Miller and Lieutenant Richard Resch were now present and gave instructions, an unrelenting tirade of bullets was fired at the two men who were hiding behind the rocks with both men returning fire. Civilian James Craig who was in his backyard at the time quickly became a victim during the conflict when a ‘stray' bullet hit him in his abdomen from 500 yards away. Mr. Craig was treated by a doctor on site and was later transported to the local hospital where he sadly passed away hours later as a result of his wound.

The attackers knew this was a suicide mission. They expected to be killed. Both men came to Australia from areas now in modern Pakistan or Afghanistan, though from different tribes.  Mohamed claimed previous military experience. It is likely that both were experienced fighting men. They kept their pursuers at bay. They wounded a policeman and another civilian as they retreated.  They took up a position with good cover (there were no aircraft available at the time) at the white rocks, for their final stand. I visited the site. The rocky outcrops rise about two feet above ground level, providing excellent cover against rifle fire (center top of picture). 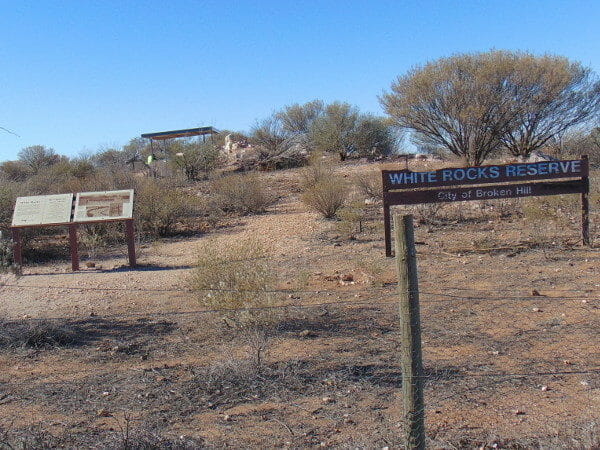 The rifles used by the attackers were a Martini-Henry in .450-577 caliber, and a Snider carbine in .577 caliber.

The attack has many similarities to modern terrorist attacks by Muslims following jihad. The attack was precipitated by a missive issued by a religious authority figure. The attack was planned and executed independently of authority, using locally available materials and a soft target.

Police was informed of the planned attack but did nothing because of the lack of details. A concerned Muslim, Khan Bahader, told the police the men were planning an attack.  He had accurately identified the two attackers by name. Police had not bothered to question the men.

The police were not able to provide sufficient response to overcome two riflemen.

Unlike most situations today, a combined force of police, military men, and armed civilians were mobilized to bring the attackers under fire. The Muslim men had chosen a good hasty defensive position, but they lacked any resupply or reinforcement. When examined, they each had multiple gunshot wounds.  One was dead at the white rocks, the other died at the hospital.

While not noted in the historical record, I suspect the two Muslims had run out of ammunition.

It is noteworthy that rifle club members participated in the armed response. There were no calls for gun control after this attack.

The Ottoman Empire suffered a severe loss at the end of World War II. In the process, from 1915 to 1922, they murdered about a million Armenian Christians.

Muslims don’t belong in any decent country. They should all be destroyed. America is foolish for allowing Muslim scum to be here.

Perfect examples in our own congress. They get their like kind to vote for them then they spend their time trying to destroy the organization they were elected to. As far as their prophet, that is exactly what he did was profit by feeding them a raft of BS and telling them to kill anyone who didn’t conform. Anybody that would believe him or the koran are not very stable, anyway. We have made a very big mistake by letting the masses of them into this country. They just keep breeding and populating every area of the world. Haven’t we… Read more »

We had been taught about this one when I was in the army here in Oz. We used it as a lesson for counter insurgency training and it had slipped to the filing cabinet I call a brain.
Thanks for the reminder.
Just as a side note. One of the reasons that the Turks copped such a flogging by the diggers in the first war was because every town had a rifle club and our troops could shoot!

Yeah, the cops had to call out the local rifle club because they weren’t up to the job.
The train was on it’s way to Silverton which is where Mad Max II (Road Warrior) was filmed.
The laws here in OZ are draconian and oppressive but I’m well heeled.
If ammo gets harder to get, make sure you’ve got PLENTY of primers pills and powder.

Those unable to defend themselves have always been the preferred choice of victims.

The jihad has always been about the body count! Hard to go for the high score when you get your head blown off by victim number3 while your pulling on victim2. Thats why to this day these pos love gun free zones!

Funny thing since the gun ban in Australia there are more Muslims in that country than ever before. What will they do now when they attack in the name of their god? Since they’ve been disarmed the next call to holy war will see many more victims. Polish your ammo with porcine grease indeed.

don’t be too concerned. The numbers of guns handed in was not what the government told everyone.
Aussie shooters aren’t dumb, shit has been put away for a rainy day. And storm clouds are brewing!

Ragheads will be ragheads. Make sure your rounds have even a small amount of pork on them.

I just hit them quick as possible! I’m certain of where they’ll go pork or no pork! Why waste good meat?

The Ottoman Empire suffered a severe loss at the end of World War II. ???
Shouldn’t that be World War I ?

Islam has not chanced since its origins in the 7th Century. A growing cancer threatening the entire world. Best to be rid of them, at least in the United States. Other nations seem happy to have them and welcome them. Like frogs in a pot, not noticing that the water is getting warmer until it is too late.

I’m not islamophobic. A phobia is an irrational fear. My fear of islam is completely rational. Imagine if the subjects of “other” phobias such as Heights, Open spaces, and Darkness actively sought out and murdered many thousands of people each year and made repeated proclamations of their will to subjugate the whole world and decapitate the resistors. Would fearing them still be called phobias?

It is amazing how many “Truth Nuggets” like these are buried within the pages of history that not only enlighten us but also CONFIRM to us the horrid and evil nature of islam and the degenerative effects it has upon a society unless it is rooted out quickly.

I would imagine the same scenario could take place today.
Being as the civilian population is pretty much disarmed. (by law)

Mudslimes live to kill, it is commanded of them by their pedophile prophet as it is written in that booklet of toilet paper sometimes referred to as the ‘Koran’. The only good mudslime is a dead one stuffed into a pigskin. The best way to combat these goatf*ckers is to buy HPBT ammo and put bacon in the hollowpoints, and let them know this, so they know they’ll be going straight to their hell.
Know why there are ZERO muslim terrorist attacks in Japan?? Because they don’t allow mudslimes in their country!!

From the times of Mohammad and also after his death killings were the Muslims only aim. DO NOT ADK THEM TO SAVE A LIFE. KILLING YAH YAH YAH. Killing unarmed and innocent people around the world was their aim. Improving legend of people- forget it. However, for an average citizen of most countries it is impossible to tell who is Muslim.