U.S.A. –-(AmmoLand.com)- If you are a Texas resident, use Knife Rights’ Legislative Action Center to urge members of the Texas Senate Committee on State Affairs to push for a vote on HB 956.

Time is running out. Every indication is we have the BIPARTISAN votes needed to pass the bill in committee and on the floor of the Senate, but the bill is stalled. Governor Abbott has indicated he would sign the bill.

The Chairman has not allowed a vote to be held.

HB 956 would remove from statute a number of places where Location-Restricted Knives (having blades over 5 1/2 inches) are banned.

If you are a Texas resident, use Knife Rights Legislative Action Center to EMAIL Chairman Hughes and committee members TODAY and ask them to set a vote on HB 956: kniferights.org/resources/congressweb/#/45  DO IT TODAY! Monday is too late!

Please share this with all your Texas friends. The more emails we can generate, the better!

In 2013 Knife Rights’ repeal of Texas’ switchblade ban was enacted. In 2015 Knife Rights’ signature Knife Law Preemption was enacted, nullifying all local knife ordinances more restrictive than Texas state law, including two of the “10 Worst Anti-Knife Cities in America” at the time, San Antonio and Corpus Christi. In 2017 our bill removed all of the “illegal knives” in Texas law, finally allowing Texans the right to carry a Bowie knife, dagger, and others in public. In 2019 our bill removed the ban on carry of clubs (including tomahawks) and possession of knuckles (including trench knives and the like).

Unfortunately, during the 2017 legislative process, as a result of a tragic University of Texas stabbing just blocks from the Capitol, a minor amendment was added to stipulate that knives with blades over 5 1/2 inches are now defined as “location-restricted knives.” These knives may be carried throughout the state except in a narrow list of places such as schools, colleges, correctional facilities, amusement parks, houses of worship, and bars that derive more than 51% of their income from alcohol sales, as well as some other locations. Minors are also restricted as to when they can carry these knives. CLICK HERE for a complete listing of the current bans for Location-Restricted Knives.

As noted above, HB 956 would remove a number of commonly visited restricted locations from the list. 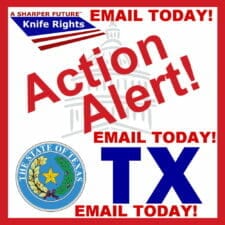 Knife Rights (www.KnifeRights.org) is America’s grassroots knife owners’ organization; Rewriting Knife Law in America and forging a Sharper Future for all Americans. Knife Rights efforts have resulted in 33 bills enacted repealing knife bans in 23 states and over 150 cities and towns since 2010, as well as numerous litigation victories.