U.S.A. –-(AmmoLand.com)- The loud slap you just heard wasn’t Will Smith popping Chris Rock again. Oh no, that was Florida’s Governor smacking the legislature for its failure to pass a number of bills. Ron DeSantis, the nation’s supposed favorite governor at the moment said this on March 29:

Hell, don’t take my word for it. You can listen to him right here say it!

As Gun Owners of America’s Florida State Director, I need your help to make sure that Constitutional Carry passes.

Click here to complete the call to action. Let Governor DeSantis know that you fully support him on calling out the legislature for failing to pass Constitutional Carry even after he told them that he wanted it on his desk earlier this year.

Constitutional Carry’s legislative sponsor, Representative Anthony Sabatini, called Gun Owners of America today and specifically thanked us (meaning you, the members and politically active gun owners) for all the hard work that we’ve put in to make Constitutional Carry an issue that lawmakers can’t ignore. He said:

“This couldn’t have happened without the hard work you guys have put in. You guys made it an issue they can’t ignore”.

So keep up the good work and fill up the Governor’s inbox with emails from GOA’s action alert!

Luis Valdes is the Florida State Director along with being the Puerto Rico & U.S. Virgin Islands Director of Outreach for Gun Owners of America. 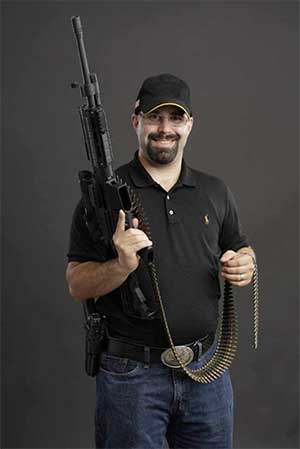 Apparently so would Marion Hammer’s.

would be fun to watch

if you listen carefully, ron says the initial call will be for redistricting, not constitutional carry. he said hopefully other issues will come up. the documents seem to support this. i am hopeful, but not convinced.

Since when has any legislative body gotten anything more done than the absolute minimum. They MAY get the maps fixed but nothing else. Florida state legislators have shown their true colors. Vote em out this Nov.

The content on this site is for gun owners to openly exchange viewpoints most if not all support our constitution and the second amendment . The infighting is embarrassing and has become abusive.
If this group as a hole can not unite politely in conversation you will empower those that continue to divide our country.

there are people who become irrationally defensive ,of others who are doing something wrong, kind of like a mother with a criminal child , they will defend that child until he/she winds up dead then blame others; rather than seeking help for the child .many members of the criminal element are mentally ill and could be helped,, this could be a reality on the other side as well, the power hungry are mentally ill the defend at all costs would seem to be there is nothing wrong with me and these are my friends so there is nothing wrong with… Read more »

Politicians have proved they can no longer be trusted from both sides of the isle. Mr DeSantis has done some admirable work as governor during the covid lock downs. On constitutional carry he has a lot of opposition even as more people are making Florida their new home. The opposing side will do anything to push their agenda to remove all guns.
Each new state brings gun owners long over do wins.

Yep. Upvoted you to counter Bill’s sock puppet downvotes. The Texas LEO posse is in love with Vichy “conservative” Abbott and jealous of DeSantis because he’s vastly more popular with conservatives. Even more popular than Trump. They also downvoted you because you indirectly agreed with my take on DeSantis. Petty.

The truth is hard to conceal

You hit the “proverbial nail on the head.” Here in my adopted State of Florida, we have a lot of misguided people moving from liberal places that want to turn Florida into the Crap Hole they left!

you don’t mean nancy should stay in comifornia,

Way to go GOA! Way to go DeSantis! I’ve been lobbying him for weeks.

Where’s all the DeSantis bashers now?

No one wants to converse with you.

I haven’t found that to be true. Your sock pups & toadies don’t. Boo hoo.

Blaming the vics again for your own butt-hurt attacks.

Waste of time. He is a recording that spews the same stuff over and over just like the other one. Take care.

Your trolling is as childish & hypocritical as Bill, who will suck up to anyone, including NRA shills, to cancel folks instead of dealing with issues. And I’ve seen you post the same stuff many times.

Last edited 10 months ago by Russn8r
-20
AmmolandPlus
Editor’s Pick
Recent Comments
wpDiscuz
We use cookies on our website to give you the most relevant experience by remembering your preferences and repeat visits. By clicking “Accept All”, you consent to the use of ALL the cookies. However, you may visit "Cookie Settings" to provide a controlled consent.
Cookie SettingsAccept All
Read Privacy Policy
Manage consent