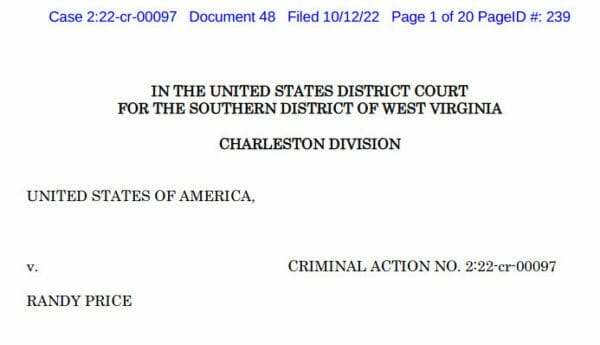 U.S.A. –-(AmmoLand.com)-– On October 12, 2022, in the US District Court for the Southern District of West Virginia, Judge Joseph R. Gordon granted a motion to dismiss the charge of possession of a firearm with an obliterated serial number in violation of 18 U.S.C. §§ 922(k) as being facially unconstitutional. Judge Gordon was appointed by President Bill Clinton.

Now, assume that the law-abiding citizen dies and leaves his gun collection to his law-abiding daughter. The daughter takes the firearms, the one with the removed serial number among them, to her home and displays them in her father’s memory. As it stands, Section 922(k) also makes her possession of the firearm illegal, despite the fact that it was legally purchased by her father and despite the fact that she was not the person who removed the serial number. These scenarios make clear that Section 922(k) is far more than the mere commercial regulation the Government claims it to be. Rather, it is a blatant prohibition on possession. The conduct prohibited by Section 922(k) falls squarely within the Second Amendment’s plain text.

The primary purpose of requiring serial numbers on firearms is to allow for the registration of particular firearms to a particular individual.

The government then has effective control over the possession of registered firearms.

If particular firearms can be legally linked to particular individuals, and the link is required by law, the government can demand the firearms be turned in, one by one or en mass.

This is because government agencies would be able to require specific firearms to be turned in, under numerous possibilities for penalties and punishment.

Firearms can be gradually confiscated over time, as happened in England and have been happening, in small increments, in California, New York, and Illinois.

The key to registration is the ability to identify a particular firearm and link it to a particular individual.

Every attempt to impose national gun registration in the United States has relied on the requirement for individual guns to be uniquely identified.

In 1938 and in 1968, the provisions requiring mandatory national firearms registration were removed from the gun control bills by Congress.

In 1938, removing a serial number and possessing a firearm from which the serial number had been removed were made illegal under federal law.

In 1968, manufacturers were required to place serial numbers on all cartridge firearms.

Such “tracing” has always been ineffective, yielding a very poor cost-to-benefit ratio in preventing and controlling crime. Benefits (of tracing), for preventing crime are small to non-existent. Costs are high.

The unstated purpose was to make national firearms registration possible.

Crime immediately went up after the Gun Control Act of 1968 and continued rising for decades.

If the West Virginia decision stands, which seems likely under Bruen, the ability to use serial numbers for gun registration and confiscation is dead. The decision does not remove the requirement for manufacturers to mark their guns with serial numbers.

It will have virtually no effect on crime or public safety from criminals.

Dean Weingarten has been a peace officer, and a military officer, was on the University of Wisconsin Pistol Team for four years, and was first certified to teach firearms safety in 1973. He taught the Arizona concealed carry course for fifteen years until the goal of Constitutional Carry was attained. He has degrees in meteorology and mining engineering and retired from the Department of Defense after a 30-year career in Army Research, Development, Testing, and Evaluation.

Bruen decision actually rejected strict scrutiny. Only history (1791 or in some cases maybe 1868) and tradition can be used to justify a restriction.

There was also mention in the Bruen Ruling that anything after the Sullivan Act of 1911 was most like unconstitutional.

That means just about every law in the country was unconstitutional.
We need many more decisions like this one…

Each and every gun control law is un Constitutional but that hasn’t prevented infringement.

With more Trump “Original Meaning” judges and given some time, I am hopeful.

Dean, that sure seems like a contradictory statement. If the 1938 law didn’t make it a federal crime to be in possession of a firearm w/o a serial #, what difference would it make what you did with it after that?

Dean, thanks for the clarification.

What do you make of the:

Home made firearms that never had a serial number are exempt because the number never existed or was not removed . Correct ?

“Tracing” is about the most useless investigative tool available. Only in the case of the original purchaser being the suspect, or if every transfer can be documented, would there be any value at all.

Add to that the fact that there are tens of thousands of firearms in circulation in the US which have no serial number, or have serial numbers that were not unique. This is just another slice off of our RIGHTS that would accomplish nothing.

unfortunately, a single federal court ruling is NOT enough. it will take another SCOTUS decision in our favor to make it so.

I wonder how this will affect guns registered under the NFA! Can we now possess non-serialized Class III weapons? If so, how will the government ever track them?

This is potentially very big. Now I wish I had that nickel plated 1911 my brother traded off because it had an obliterated serial number.

So why would we still require manufacturers to put serial mumbers on firearms in the first place? If you want a serial number on your gun, go have one engraved on it.

I keep requesting my congress-critters to ask ATF director Tweetle-dumb (?) how many cases of physical violence have been solved where the single clue leading to the perpetrator was a firearm’s serial number. Maybe we’ll get an answer someday.