Michigan – -(AmmoLand.com)- Both the Michigan Legislature and the state’s entire Executive Branch are now controlled by opponents of armed self-defense rights. It’s likely we will see attempts to pass gun control legislation soon. The Michigan Legislature is expected to begin taking up policy items in committees by late February and early March.

Shortly after the November election, Michigan Coalition for Responsible Gun Owners (MCRGO) began to meet with allied gun groups to discuss strategy for the upcoming legislative session. One result of those meetings has been the creation of discussion points for educational purposes -not only directed at legislators but also the general public and fellow gun owners.

Along with Attorney General Nessel’s pledge to ban all forms of defensive carry inside the State Capitol, Governor Whitmer has listed three early firearms goals.

We covered storage mandates in the MCRGO E’News two weeks ago. Today we turn our attention to Red Flag laws.

When discussing policy, it’s helpful to focus on the practical implications of gun control laws on crime and public safety. Use these discussion points below to craft communication with your elected officials and social media posts in your own words. Your personal statements will have a deeper impact than copied and pasted form content. This link will help you contact your Michigan legislators.

Red Flag is a poor fit for the problem. There are already processes to ban firearm possession based on mental health, criminal convictions, outstanding criminal charges, and protection orders. Michigan’s Mental Health Code already addresses this subject and provides more protections to the public and the individual than Red Flag would. If there’s a problem with the existing process, why aren’t we talking about that?

Firearm seizures, especially those conducted without prior notice of action, inherently involve armed confrontations between authorities and citizens, posing a risk of injury or death to both and innocent bystanders. Red Flag laws will lead to more Breonna Taylor incidents.

Red Flag does nothing to address mental health. These bills do not provide the supposedly dangerous individual any form of treatment, services, monitoring, or incapacitation during the period of the Red Flag order. The individual is often left to their devices, in an increasingly agitated state. Nothing would be in place to stop that individual from causing harm to themself or others by other means.

Red Flag laws strip individuals of Second Amendment rights by confiscating firearms without due process. They allow a court to issue ex parte (meaning the accused is not present) firearm confiscation orders. A person could be forcibly disarmed of otherwise lawfully possessed firearms before they had an opportunity to contest the accusations. This is a clear denial of constitutional due process protections.

Red Flag is inherently racist and sexist and denies due process protections to those who most lack the resources to defend themselves in court.

More background on Red Flag laws from Dr. John Lott can be found online at his website www.crimeresearch.org.

The Michigan Coalition for Responsible Gun Owners is a non-profit, non-partisan organization. Formed from just eight people in 1996, we now have thousands of members and numerous affiliated clubs across the state. We’re growing more prominent and more effective every day. Our mission statement is: “Promoting safe use and ownership of firearms through education, litigation, and legislation.” 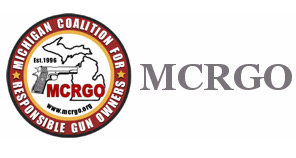 Confiscation without due process is an open door for government to take just about anything they decide. What part of the 4th Amendment has a clause, “except for”?

Hell, I thought Michigan was on the verge of getting Constitutional Carry (really permit less carry) passed into law! Now their saying ERPO’s?. Don’t make any sense.

With Whitmer as Gubbnah? No way they would have gotten Constitutional Carry. She is the last one (next to Hochul ) to abide by the Constitution. No, I think the residents of the state of Michigan need to start studying and learning the art of both Urban and Rural Caching techniques.

I would love the opportunity to either move back to my old home State, the Beautiful Peninsula, or at least have a summer retreat there but Michigan’s high taxes and miserable gun laws forever preclude it.

The people and the scenery are worth it.

With the state of Illinois and Oregon now going full speed ahead trying to outright ban ownership of ANY semi-auto firearms, how long do any of you think it will take a state like California (the last 3 days being an example) to ask the Demented Pedophile to declare Martial Law for their state? This move would reveal how these tyrants will try to confiscate the firearms of lawful gun owners nationwide. Will they begin to freeze bank accounts? Stop SS and or Pension checks? Go house to house? Rely on “friends”, coworkers and or neighbors to rat folks out?… Read more »

With Neighborhood Watch, you can meet the unconstitutionals (noun) at your door with your shotgun and revolver tucked in your belt, asking if they have any Probable Cause against you they wish to present, while your neighbors reinforce your perimeter from their windows and cover vehicles.

AMMO LAND did you pull an article?????

This is why many Americans refrain from 2A participation altogether! Because they’ll never allow it to be final that’s why. You’ll always have some additional burden of proof to meet. Some liberal or some pig chasing you through life with some trendy new piece of paper. In fact, once you’re on record of owning a gun in this country, you and these perverts might just as well hold hands!

Last edited 13 days ago by Ledesma
1

We need real “Red Flag Laws” against idiotic, lame-brained DemoRats; want to register my long gun-knock on the door!