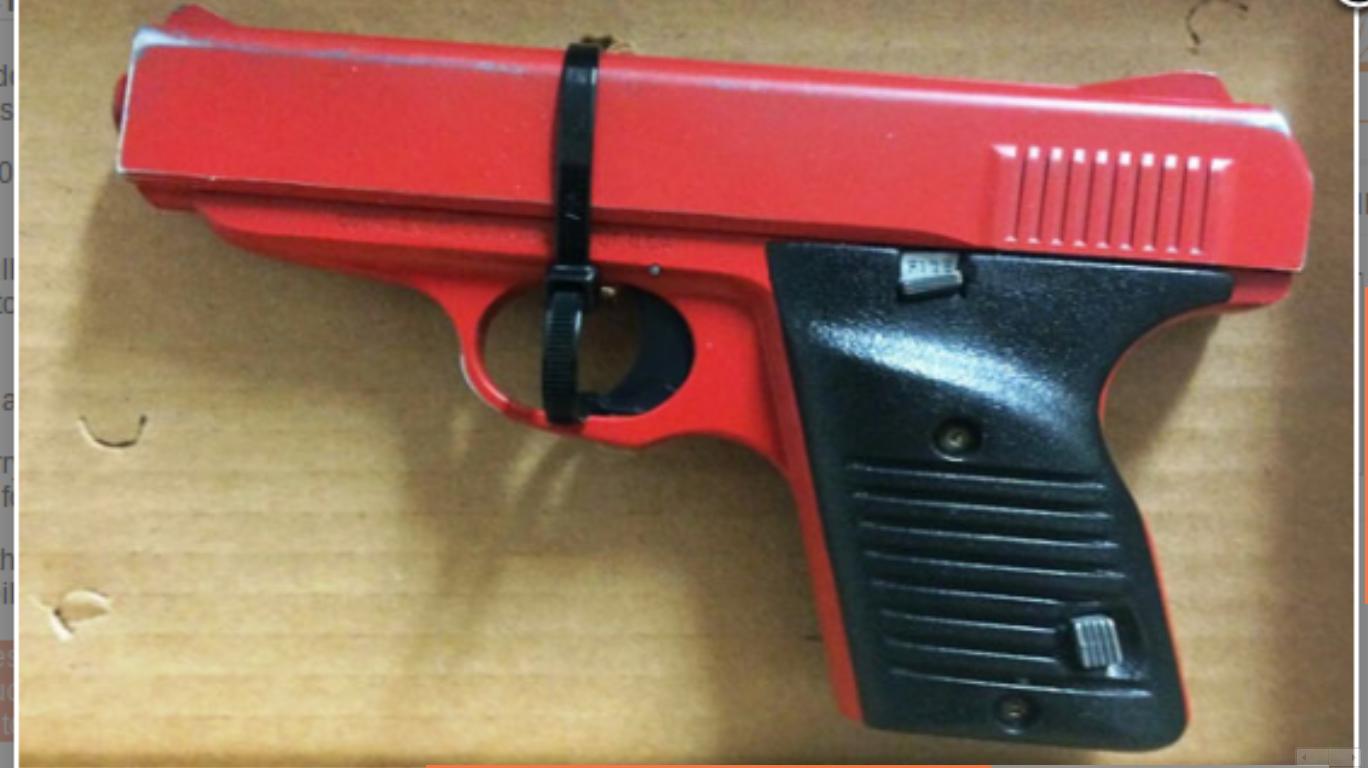 Arizona – -(Ammoland.com)- Someone painted this Cobra FS 380 for unknown purposes.  The police claim that it was to make it appear to be a toy, but people have been customizing and adorning the appearance of weapons for centuries.  From fox19.com:

CINCINNATI, OH (FOX19) –
Orlando Lowery was in court this weekend for allegedly painting his .380 caliber semi-automatic handgun to look like a toy.

It is only in recent times that firearms could easily be made in many different colors.  As the capability to do so has emerged, more and more people are taking advantage of it.  Here are some pistols in different colors.

This Pink Glock is fully functional.  One advantage of brightly colored handguns is that they are highly visible.   It is hard for a gun to be a credible deterrent if it cannot be seen.   I have read of more than one incident where a person armed with a mini-revolver was forced to fire it to prove that it was real. 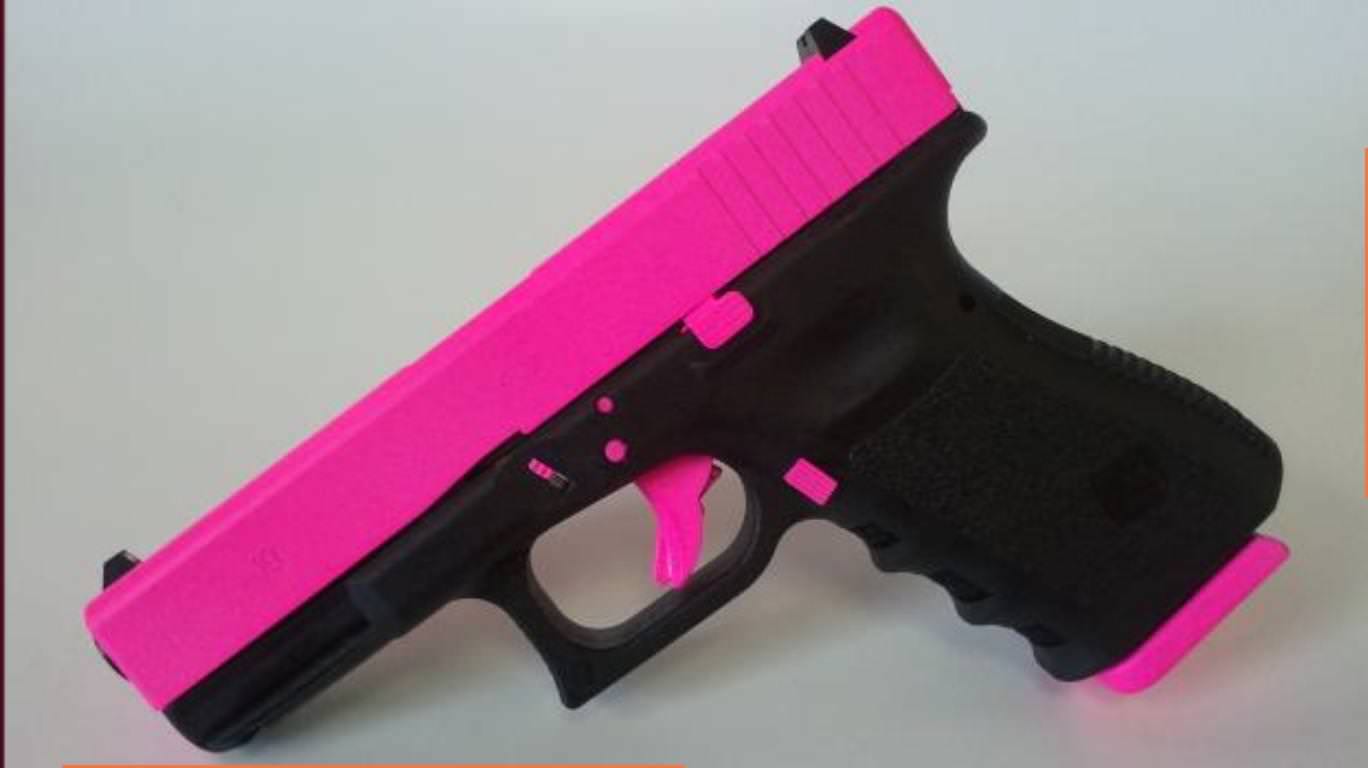 Here are a couple of colorful Glock pistols that are not functional. If a criminal wanted to have police believe his gun was not “real”, training blue might be a better color. Blue is the traditional color for training munitions that are inert. This is a Glock 17 T FX. 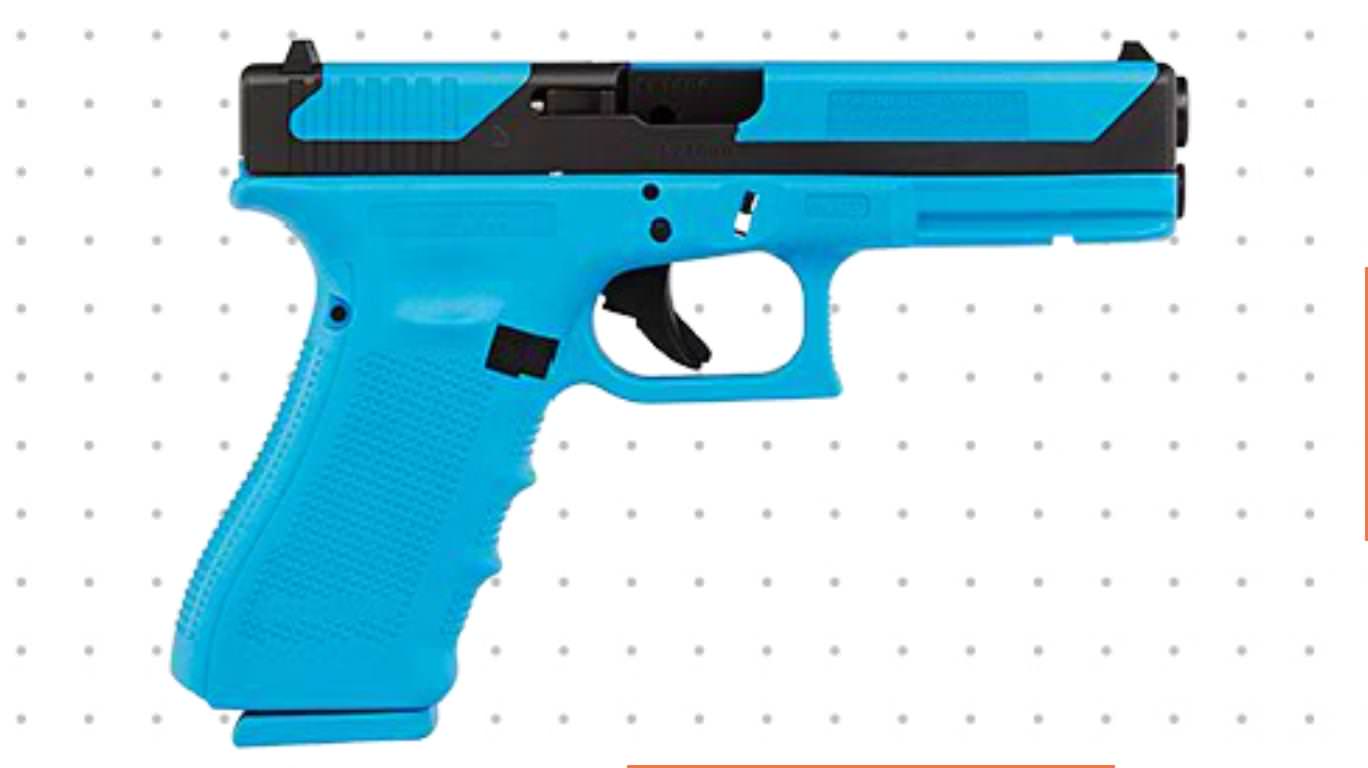 Another colorful Glock that cannot fire, a Glock 22 P 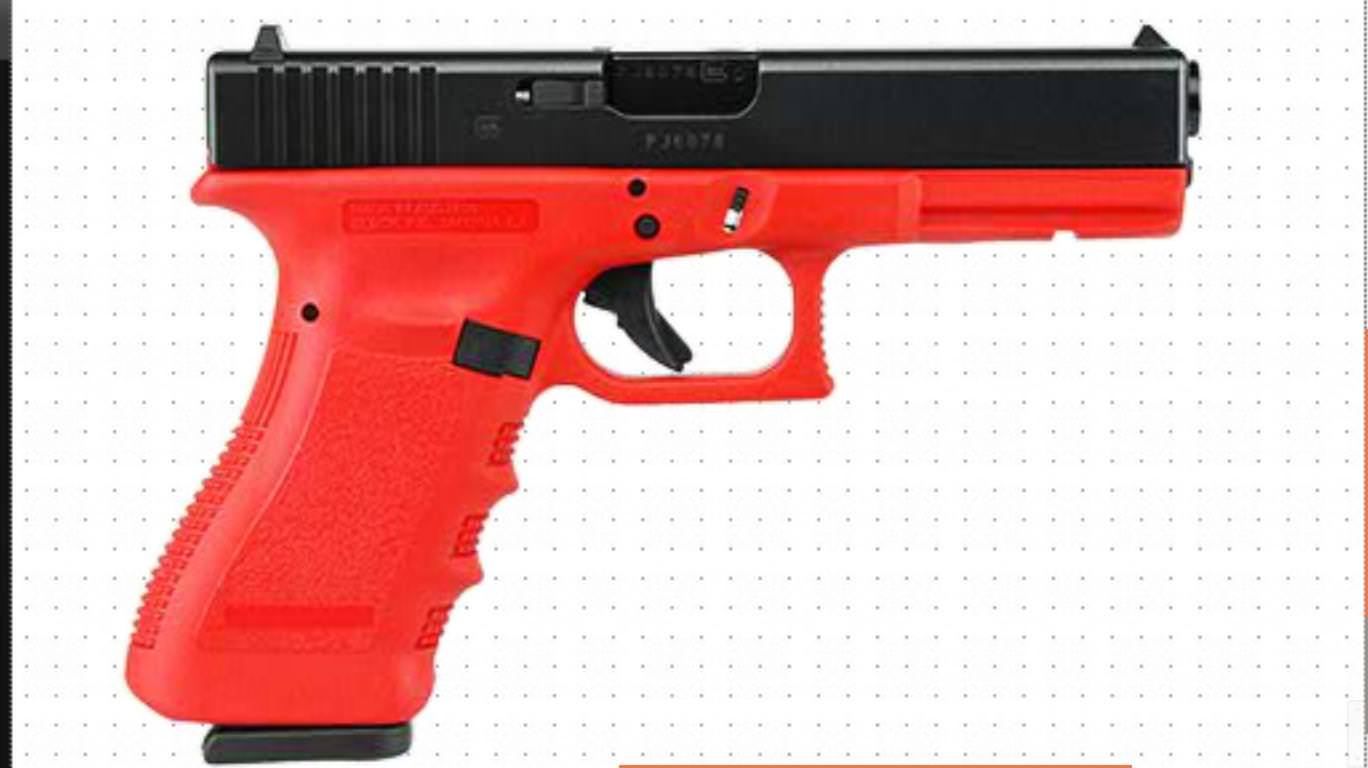 This Taurus PT 738 has an excellent reputation for reliability. It is small, light, easy to carry, and is said to have one of the better triggers of the tiny, composite framed .380 pistols. It comes in a variety of colors. 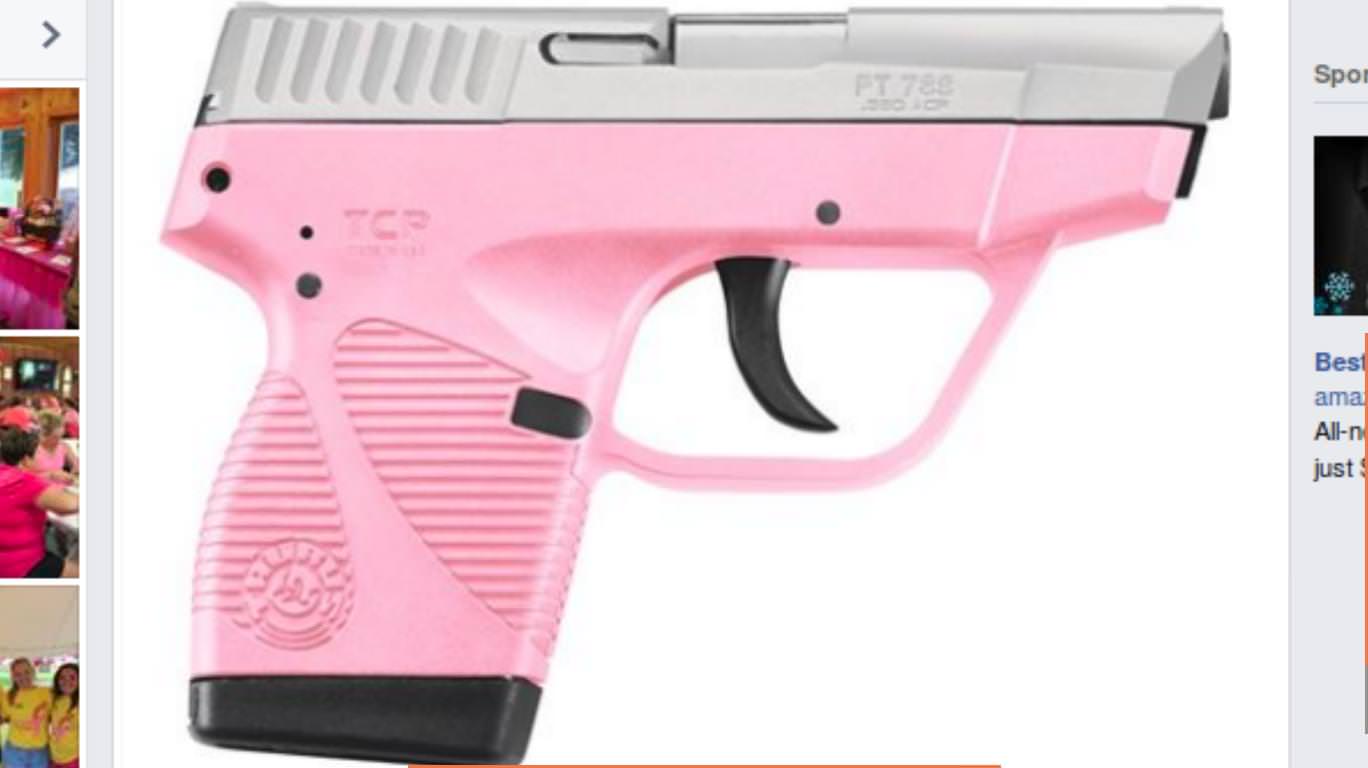 In the article about the painted Cobra FS, a Democrat legislator wants to require non-firearm guns to be brightly colored:

It seems a nonsensical solution to a non-problem. A 12-year-old who was acting irresponsibly with an airsoft gun was shot and killed in Ohio. The orange tip required to be on the gun by law had been removed. From foxnews.com:

A boy brandishing a replica gun died Sunday after being shot by a Cleveland police officer responding to a 911 call about a person waving a gun in a park.

Deputy Chief Ed Tomba said the officer fired twice after the boy pulled the fake weapon — which was lacking the orange safety indicator usually on the muzzle — from his waistband.

An officer should never assume that a realistic looking item is not real if it is colored, so requiring non-guns to be colored is silly.

The proposed law seems an emotional response that burdens everyone else for the sake of extremely dubious benefit. It costs time, money, manpower, and incrementally reduces liberty to implement these regulations and laws. The old “if it saves one life” mantra is irrational. A great many things might “save one life”. In the example above, you can easily argue that the “coloring” regulation was partly responsible for the shooting. There was no orange tip, so the officer was more likely to believe the gun was a real threat.

One may also ask, what if it costs a single officer’s life, because they assumed a gun was a toy when it was not? Hypothetical’s can be easily constructed for both sides.

In half serious mien, it would be better to pass a law requiring all 12-year-olds to be responsible young men with strong moral values. If followed (not easy, but done in much of the country by custom and culture), it would save many more lives.

Okay, so if they pass a law that toy guns have to be brightly colored, what is to prevent criminals from painting their guns with bright colors so the cops won’t shoot them, but they can still shoot the cops. And some of the people posting here are lumping all cops as reckless, uncaring, trigger happy thugs. Do you really believe that a person becomes a cop so they can go shoot people without cause? Do you have any clue of how much of an emotional ordeal it is to shoot someone and have to live with that the rest… Read more »

cops are color blind. they see a gun and get all worked up instead of remaining calm. the cop did not have to shoot that kid on a wim. He could have assest the situation from a far and then pull up with his gun drawn and tell the kid to drop the gun. no this cop just freaked out and shot the kid. the video does not show the kid pulling the gun out . He was just standing there witth the toy at his side and got shot in a heart beat. you should see the custom work… Read more »

If a law is passed that gun replicas should be a bright color, who will decide what the color should be, when there are many brightly colored REAL guns on the market already. What happens to all pink real guns if pink is chosen for replicas?
Does this mean if you own a real gun of the color chosen for replicas, your gun is illegal.

Unfortunately the focus right now is on ‘black rifles’ and there’s nothing funny about that!

what if it cost 1 officers life? The answer to that is simple, most people don’t care if cops die. They think if anyone is going to make it out of that situation it should be the civilian. At least that is the thinking that is popular today.

Cops kill 4 times as many people as cops are killed by non-cops. Cops wear protective vests. That should give them time to THINK. How many people are killed in the name of officer safety ? Far too many. This ‘anything is justified if done for officer safety’ is killing civilians. Better understanding of the situation would save lives. 911 calls claiming ‘somebody has a gun’ or such without contacting the reporting party to properly understand the situation is causing cops to make contacts without adequate knowledge. In the 60’s, we had realistic looking toy guns that fire caps. Kids… Read more »

Yes, that should be done. However, many of these cases are people that are following the directions from Bloomberg/Watts directions from MDA/Everytown/\MAIG, that tell people to claim to be threatened any time they see or suspect a person has a gun. So, this practice of SWATTING needs to be stopped by charging people that make false police reports and investigate MDA under the RICO laws as a organized crime group.

Are we sure the criminal painted that? Ruby Red is a custom color for the FS 380 and that looks factory painted.