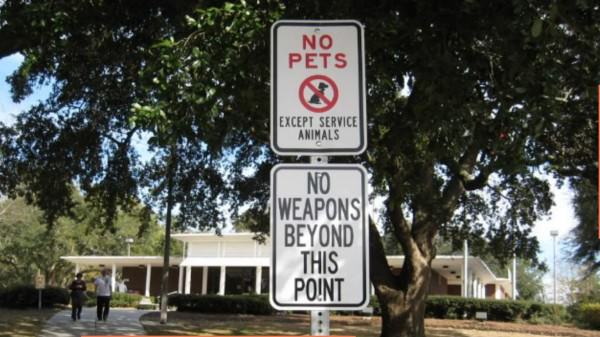 Arizona – -(Ammoland.com)- A year and a half ago, I wrote about the illegal “No Weapons” signs at rest stops in Alabama.  The Alabama Department of Transportation doubled down and declared the signs legal … because.  Yesterday afternoon, Friday, the 24th of July, 2015, Governor Bentley stepped up to the plate and ordered the signs taken down.  From yellowhammernews.com reporting the Governor’s tweet:

I have ordered the AL Department of Transportation to remove signs banning weapons at all Alabama rest stops to comply with state law.

Good for the Governor. He knows how to count. He is also keeping his campaign promises from 2010:

Governor Bentley is a Republican.

@CEO,Weingarten knows Bentley is a Republican.It even says so in the article. You don’t think a stinking Democrat would had taken this action do you ?

Governor Bentley is a Republican! We hope Democrats don’t come back into style. We had 100+ years of them and that was 100+ years too much.