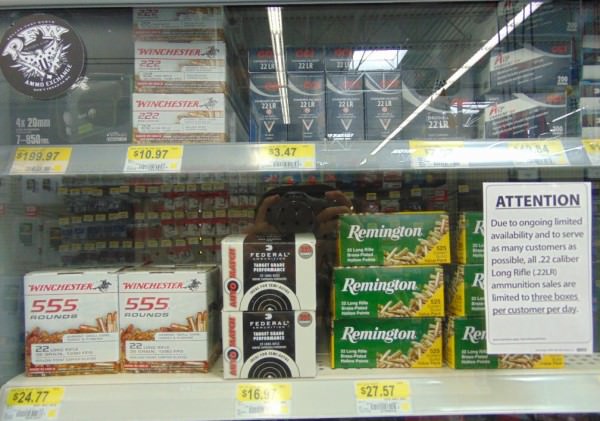 Arizona – -(Ammoland.com)- I just got back from the North Dallas Wal-Mart just off the George W. Bush freeway and Marsh rd, consistently had 5 cent .22 ammunition when I visited my Daughter in October.  When I checked on 29 November, there were five boxes of Winchester copper-plated .22 LR, 333 round boxes for $14.97.  That translates to 4.5 cents a cartridge.   I suspected that it was a fluke.

Perhaps this is another fluke.  Maybe not.  I have expected the .22 ammunition bubble to last until a Republican president is elected; but maybe President Obama’s ability to scare the ammo buying public is finally fading.  Maybe Donald Trump is having an effect on enough voters that they feel a bit more confident about the future.  The .22 ammunition bubble has been primarily a political one.  People saw the strident demands for more restrictions on Second Amendment rights.  They saw the Constitution being ignored and trampled on.  They saw the media cartel aiding the avoidance of the normal legislative checks and balances.  Those that did not have much .22 on hand decided that they needed a couple of thousand rounds instead of 50 or a hundred.  Shortages led to panic buying and small scale entrepreneurs purchasing bulk ammo before the public ever saw it hit the shelves, then selling it at gun shows or on the Internet, kept the prices high.

Certainly, many more people believe that the stranglehold on setting the agenda and determining the debate by the media cartel, is being challenged, possibly broken, for the foreseeable future.  This means the chances of more infringements on the Second Amendment are poor.

The producers of .22 ammunition have been running full bore for three years.  They have not been able to meet demand, although nearly the entire production of .22 ammunition for the planet has been directed to the American market.  At some point, those who feel the need to have a stockpile of .22 ammunition will have their need satisfied.  At that point, the prices will drop and return to near “normal”.   I expect sale prices of .22 ammunition, in bulk packs, to fall to 3 cents a round or lower.   This assumes that monetary inflation will remain low.  If it takes off, those prices would rise with other commodities.

Currently, the prices of lead, copper, petroleum and labor remain at or below what they were when .22 ammunition was available for less than 3 cents a round, so the prediction looks good.

This single sighting of  a full shelf of Wal-Mart .22 does not mean the bubble is burst, but it is a hopeful sign.

Sorry to say, I am a small retail dealer who buys from wholesale distributors and I agree with L.G. Sports, we CANNOT get 22 ammunition and I sincerely don’t care what the media or some expert says about people buying it all up. Fact is, if I can’t get it to sell it to you then you can’t buy it all up and hoard it. It’s true Walmart gets some ammunition but it’s in small quantities and nothing like it was before some jerk in DC got smart and decided to get every government agency in this country including the… Read more »

Don’t worry it will be gone the next day.

Glad to see more 22 on the shelves Dean. Maybe it gets there because they don’t dish out 50,000 rds @ a time to people. Maybe Lg Sports is a nice guy, but from what I’ve seen from smaller dealers is greed and gouging. I too have been able to stock up about 2,000 rounds quickly from Walmart (3 x 333 rd. boxes in 2 trips). I keep 1 ammo can full, as I think it’s better than cash in the bank for surviving a SHTF scenario Then I bought it for family and friends till they had enough.(Sold @… Read more »

I was at Academy Sporting Good store in Oklahoma city on Wednesday December 9, and saw some 22 ammo behind the counter, I ask the little girl working the counter for a price and she said 9.98 per box for Remington or Federal 22LR they also had some bricks of 500 rounds sitting there, I ask her the price for a brick, she said they only sold them by the box of 50, and they would break down the brick and only sale them by the 50 round box!! Needless to say I will not be doing business with anyone… Read more »

Most kids are taught to shoot using 22’s. Obama believes that if he can make 22 ammo hard to get, then fewer kids will not have the chance to learn to shoot. That way there will be fewer people later on that will become carriers.

@L.G.Sports,they have 333 rd boxes at Walmart in Houston. I bought 3 boxes even though I have nothing chambered in that caliber. I will buy 3 boxes a day a long as I can and sell it to people that need it. I will sell it for what I paid for it too. If there is some activity involving kids needing it to compete or learn how to shoot I will donate it.

I have had a order in at my Wholesalers for 2 years for 50000 rounds and nothing has showed up. MAJOR WHOLESALERS. Local Walmart only gets in maybe 2500 rounds every 2 weeks, and that’s sold when the doors open.
I would like to know where in the hell this 22 ammo is????? I sold personal stock to the Shooting Sports kid so they could shoot this summer. Our range had to cancel shoots because of no 22’s.