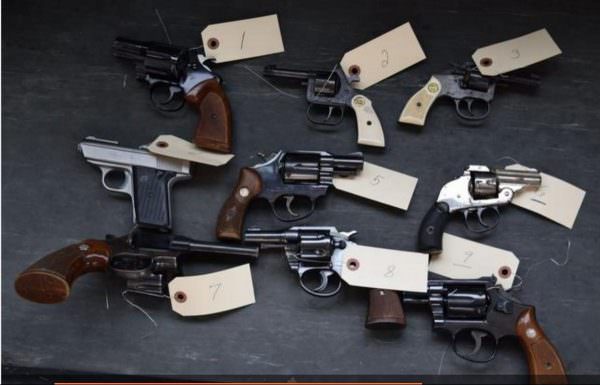 Arizona – -(Ammoland.com)- Brockton Massachusetts held their first gun turn in or “buy back” in 22 years on 21 May, 2016. “Buy Back” is a propaganda term; the guns were never owned by the people who are buying them.

The event was advertised as accepting guns anonymously, no questions asked. This seems to violate Massachusetts law. There may be an exemption for police.  Police will be present; it is unlikely that they would enforce the law against themselves, even if there is no exemption.  From wcvb.com:

In exchange for each gun turned in, a $200 gift card to Vicente’s grocery store will be given. The gift cards were paid for using forfeiture money that has been seized by the police from drug arrests and raids that led to convictions.

The event seems to have had 9 pistols turned in, two shotguns, a rifle, and a couple of BB guns.

Gun turn in events have dwindled in most states, but most states have not infringed on private sales.  Private buyers have become common at gun “buy back” events in other states. Private buyers destroy the propaganda message that “guns are bad, and should be turned in to the police“. In Massachusetts, it would be risky to attempt a private sale with a heavy police presence at the site. From state.ma.us:

It is too bad that private purchasers were unable to participate in the Brockton Turn In event.  There were some very nice revolvers turned in for the $200 gift cards.  The three Colt revolvers were likely worth about $600 each on the open market.  They are not made any more.  The Smith & Wesson model 15 would be worth about $600 or more.  The center revolver is likely a Rossi or a Taurus, probably about a $250 pistol.  The other four pistols are inexpensive, and would bring about $50 to $100 on the open market.  $200 was generous compensation for them.

A criminal justice professor and former police officer admits the program is primarily a propaganda measure.

“They’re mostly publicity stunts. It’s not going to affect the crime rate. But it may prevent an individual crime,” said Mitch Librett, a criminal justice professor at Bridgewater State University. “I’ve done a few of these and you’d get 100-year-old revolvers, you’d get shotguns that were rusted so badly that you couldn’t even open them up. They’re people who are usually elderly, who are hurting for money and they bring back a Luger from WWII.”

The professor does not mention that a WWII Luger is likely worth 5 to 10 times the value of the gift card offered.

In nearby Pennsylvania, a  City Councilperson is using public resources more effectively.  The guns that are collected with his program are sold on the legal market to fund further “buy backs”.  From cincinnati.com:

Deer Park City Councilperson Charles Tassell, who is pro-gun and holds a concealed-carry permit, didn’t think that was the best way to run “Street Rescue,” his gun buyback program.

Instead, he turns in the collected guns to federally licensed firearms dealers to be sold to the right hands.

“It’s not my determination of the ‘right hands,'” Tassell said. “It’s the federal government’s decision.”

Gun turn in events, or “buy backs” are dwindling as Second Amendment supporters have learned to negate their propaganda value with private buyers.

The events will linger on in states such as Massachusetts, where private sales suffer under many infringements, or in programs such as Street Rescue, where the emphasis is on efficacy instead of propaganda.
©2016 by Dean Weingarten: Permission to share is granted when this notice is included.

I love buy backs, though the years it has allowed me to dump junk guns that the only reason I bought was to sell at buy backs. Stuff I paid 40 to 60 bucks so I could trade them for 100 in gas cards or 200 at best buy. Unfortunately they figure out they don’t really work where I live so don’t offer then very often. If they worked they would have them every months or so.

LOL…..so they buy them back and then turn around and sell them again…..priceless!!!

When did a liberal ever let the law stand in their way? Answer NEVER!

Buying back guns from law abiding citizens because you think criminals have too many guns, is like casterating yourself because your neighbor has too many children. Stupid and pointless