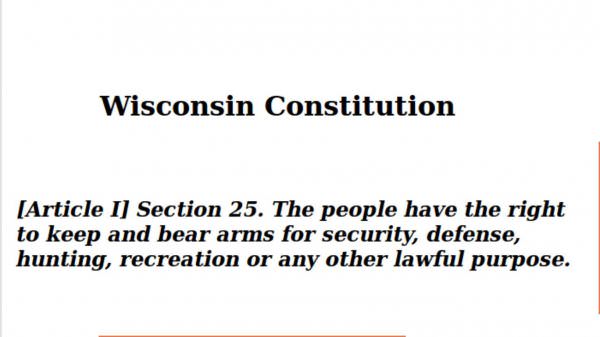 Arizona -(Ammoland.com)- A leftist Wisconsin group, Wisconsin Anti-Violence Effort (WAVE) is opposing teaching children gun safety in schools. They prefer that children not be taught about gun safety, because if they learn about guns, they may decide that guns can be fun and useful.

A group dedicated to preventing gun violence has concerns, over a bill that could have Wisconsin high schools teaching kids how to safely handle guns. The legislation from Republican lawmakers requires the Departments of Public Instruction, and Natural Resources to develop the curriculum.

But teaching children to swim keeps many from downing. Teaching defensive driving reduces car accidents. Teaching gun safety has a high correlation with decreasing firearm accident rates.  Guns have many useful purposes. With the Wisconsin Constitutional protection of guns, they will be hard to eliminate.

WAVE has always been a political organization. WAVE is a small organization, funded by the leftist Joyce foundation. From patch.com in 2012:

However, WAVE is very politically active. Jeri Bonavia, the executive director of WAVE, is often found in politics, pushing gun control on behalf of her and the WAVE organization. For just a few of many examples, see here, here and here. Notice the recurring theme? It’s always somehow related to gun control. In addition, WAVE itself is a registered lobbying group in the state of Wisconsin.

The heart of the “anti-violence” group is not opposition to violence, but opposition to individual power. Guns are an extension of individual power, like a power drill, an electric iron, a car, or credit card. All of them extend your reach, and amplify your abilities.  They are tools that can be used for good or evil.

All people believe that some people should not be allowed to have guns. Our current legal system bans guns for felons, those who have been adjudicated as a threat to themselves or others,  and to minors without parental consent.

But those who wish the public disarmed aim for much more restrictive policies. They aim to teach children that guns are bad and should be avoided.

How else can you explain a policy that aims to prevent children from learning gun safety, because they may learn to like shooting guns?

Do we choose freedom or ignorance? Thomas Jefferson said:

I have sworn upon the altar of God, eternal hostility against every form of tyranny over the mind of man.

Second Amendment supporters have consistently claimed that teaching children to use guns safely teaches them to be responsible adults. Those who wish to disarm the public believe that ignorance of guns is a better solution.

The anti gun mentality is based and operates on two fronts, one is the underlyling (taught) fear of a tool. The other is the pathological drive of the left for power and control. Socialism in what ever capacity thrives on both and BOTH are exercises in people control. The anti self control and responsibility left want, no DEMAND we surrender our individuality and personal responsibility to THEM. Over the last 20 years I have witnessed the degradation and destruction of the liberty and freedom of the American public by these narcissistic self absorbed mental degenerates. Blomberg is a PRIME example.… Read more »

With all due respect, the gun is pointed in the right direction, they have ear and eye protection, the adult is exercising control, the little girl is smiling. We’ll have to disagree on the danger of how closely the (probably .22) gun is being held. They can continue to work on techniques at the next range session, especially if they bring an S&W model 29. What’s important is that you provide an overall safe, ENJOYABLE experience so new shooters will want to come back.

With all due respect, we instructors prefer to follow the prescribed standards, whether with .45ACP or .22LR.
Well, BULLY! You are right: she is pointing the pistol downrange! Now, for proper grip and arm extension, followed by sight picture, front sight, breath control, trigger press and follow-through…… There are no exceptions for different calibers.

If I understand what you’re saying, I’ll agree to disagree. Safety and fun first. If you get them to come back, encourage safety, fun and (more proper) technique. Skill development is a lifelong process that I see pursued by all dedicated shooters. Keep on keeping on.

That would be great to teach kids all ages but not once every other year teach all kids about gun and how to handle then safely .

That is a TERRIBLE photo! Low grip, arms not extended, which could cause face and scalp wounds if the little girl fires a round. Who supplied the photo: the anti-gun crowd? Time for photo editors to learn something about gun safety.

Charles A Hayes
Reply to  durabo

When I saw this photo, I winced! Surely, a better pic could have been taken.

If you look at the photo closely, you can see the ejected spent shell in the air. Evidently the girl just fired a shot and none of what you predicted happened. Perhaps she did have her arms extended and relaxed them. Perhaps she has just taken her first shot and is learning to keep her arms rigid. You really can’t tell much more from the pboto other than that you are completely wrong in your assessment.