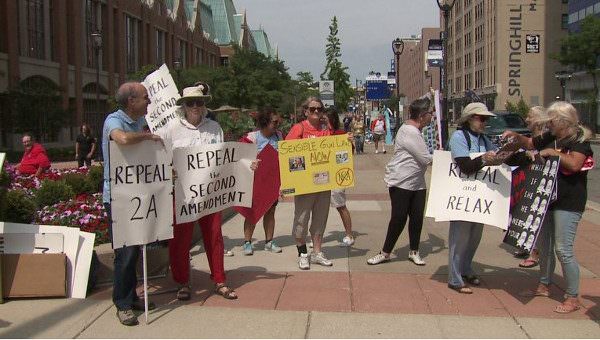 Arizona -(Ammoland.com)- Protesters in Milwaukee want repeal of the Second Amendment.  The signs at the NRA Carry Guard Expo show the intentions of those who want a disarmed society.

They are not talking half measures. They want to repeal the existing Constitutional right. At Milwaukee, they did not make much of an impression.

Inside the Wisconsin Center in downtown Milwaukee, thousands are learning from instructors, and checking out new products at the expo. Outside the convention center, a small group gathered in opposition.

“We don't need a provision in our constitution saying anyone has a right to have a gun,” said Lee Goodman, Peaceful Communities.

The stood holding signs, protesting guns and the NRA.

What the cameras did not catch were the open carriers demonstrating in favor of open carry. A trusted source noted that there were  a number of open carriers at the event. I have spoken to the writer. I have known the person he is referring to for many years.

A friend of mine went to down town Milwaukee to the NRA Carry Guard Expo.

As he was talking with some friends a on duty MPD officer came in and started talking with one of the group that the officer obviously knew.

The officer was discussing the counter protestors out side and said that there were about 50 of them in one area.

Then he said there were two open carriers across the street with pistols and rifles.

My friend was carrying as were the people he was talking too.

He reported no anti gun signs and he saw other people carrying also.

My what a change from a few years ago when Milwaukee's mayor and police chief said open carriers would be treated as criminals and spread eagled on the ground any time they were seen.

He said there was a good turn out last evening and was going back today with his 79yoa mother who wanted to go.

In 2009, before the passage of the shall issue law in Wisconsin, Chief Flynn said, as recorded on washingtoncountysheriffwi.org:

“My message to my troops is if you see anybody carrying a gun on the streets of Milwaukee, we'll put them on the ground, take the gun away and then decide whether you have a right to carry it.”

I do not know of any incidents where Chief Flynn's “troops” carried out his threat; even a Milwaukee Police Chief seems to know when to back down.

Too bad no one has found pictures of the open carriers at the expo. They may yet surface. But open carry has come a long way when they do not make the news at a national NRA event.

Police in Milwaukee no longer pretend the Second Amendment to the Constitution does not exist. The comments of the officer overheard in Milwaukee show that the exercise of Second Amendment rights has been accepted by the police in Wisconsin.
©2017 by Dean Weingarten: Permission to share is granted when this notice is included.

We can fix a lot of thing’s hear in this USA of ours.But with protesters and liberals
like the people pictured you know WE CANT FIX STUPID !

According to the signs in the photo, the already dumb get dumber en masse.

First off let’s get something STRAIGHT! We don’t have “Constitutional Rights”. We have UNALIENABLE rights, as Thomas Jefferson described them in the Declaration of Independence. The Constitution is there to tell the GOVERNMENT to leave OUR UNALIENABLE rights ALONE. PERIOD. My rights come from birth. I have the RIGHT to my life. And obviously if I have a RIGHT to my life, I have the CORRELATIVE RIGHT TO DEFEND IT FROM ANYONE and EVERYONE trying to take away ANY of my rights. So even if they “repealed” the 2nd amendment, even if they did away with the Constitution, WE HAVE… Read more »

DaveW
Reply to  Mark Are

Well said! And, to a degree, just what has been upheld by the SCOTUS.

I’d love to attend a demonstration where the people pictured happen to be, with my own sign.. REPEAL the 1st, 3d, 4th, 5th, 6th, etc., etc., etc. Because, without the 2nd, as George Washington pointed out, there would soon be no other rights… in his words, ‘the 2nd gives the People teeth to defend the others’.

They are just called Constitutional Right because they are conveniently enumerated in that document. Don’t get wrapped so tight.

Mark Are
Reply to  Wild Bill

People need to understand that they are rights, Constitution or not. They exist with it or without it. The people in RUSSIA have the same rights. Everyone on the PLANET has the same rights. Most just don’t want to stand up for them due to fear of death. Well guess what? We’re all going to die anyhow! Might just as well take some tyrants with us. Give them an early exit.

What will the snowflakes have to say if they had their life threatened by a criminal without a firearm; we need to outlaw (fill in the blank)?
What if their life was in danger and a non-governmental type saved them via the use of a firearm?

I had a discussion with one such person. He said he would pray for deliverance if he was being robbed by an armed criminal. I asked, ‘what would you do if your family was with you?’. The response was, ‘I’d pray harder’. My next comment was, ‘suppose, in order to show you how serious the criminal was, he shot dead a member of your family… what would you do then?’ Again I got, ‘pray harder.’ What happened to the courage shown by the millions who stood up and joined the armed forces to fight against Hitler and Hirohito? The courage… Read more »

Old hippies never die they become anti-gun protesters. Lots of them will perish if the USA becomes like Europe. Stupid wont last long on a battlefield. Wisdom is calling you snowflakes. Better wake up and listen.

I don’t know what class of “old hippies” you know that are afraid of guns, but I know a LOT of them and we ALL have guns, use them and carry them. Oh, there are a few pooftie types who still fear anything that could possibly harm anyone else…. including steak, cheese, but not tofu. But I only knew one or two of those back then. A few years of having to deal with life, unprotected by the herd, has caused most of the old hippies to wise up. Perhaps you are referring to the marxist socialist types from back… Read more »

Old hippies, in general, are those people who came up in the 1960s, like Jerry “Moonbeam” Brown and so many others who are politicians today, and are members of the liberal progressive socialist Democrat movement/party. People who were students during the decades following the 1960s, who were insidiously indoctrinated by liberal socialist professors to stop using critical thinking and just parrot whatever they were told. Tell them that we all have a right to remain alive, and that we have a right to enforce that right with anything, including firearms, and they will say that people having guns will have… Read more »

Amen. I just love it when we have “old hippies” or leftist liberal democrats on here professing that all of the ones they know are like them and like guns, carry guns, shoot guns and believe just like we do. Well I say theyre all full of $#!+ because all of those a holes are alot of the damned problem.
Say what you want I really dont care and I damn sure dont believe it.

The big story is that there were 50 counter protesters there. That’s at least 10 times more than the number of “Every town” or “Mothers demand” that I have ever seen at any of their staged protest events, including at the NRA annual meeting earlier this year. And unlike at Berkeley and C’ville, they didn’t get violent. I wonder why not? 🙂

DaveW
Reply to  Heed the Call-up

Maybe they were not paid enough to take the risk of actually getting hurt.

oldvet
Reply to  Heed the Call-up

@Heed… Would think they might have thought they could run into a few concealed carriers.

You hit the nail on the head bud these free-range chickens may be misinformed they’re not stupid. It’s refreshing to see intelligent comments rather than schoolyard taunts. Methinks there ain’t many Millennials posting to this page.

Usta be a leftist..

What a bunch of idiots; Just as ‘safe’ as ‘gun free Europe’; where the islamists use whatever they can get their hands on to kill you….and they DO have guns

DaveW
Reply to  Usta be a leftist..

Not only Islamists. In England today, criminals, meaning non-Islamists, are using guns (especially handguns) to stick up stores. Such guns are readily available. At the same time, for the past few years, fewer people have applied to become police officers. In Australia, after firearms were banned, it has been found that many thousands of firearms were never turned in. Meanwhile, criminals are still running drugs, gangs are committing fire bombings of stores which refuse to pay for protection, pedestrians have been mobbed and beaten simple for the sake of beating them, vehicles are being stolen at a much higher rate… Read more »