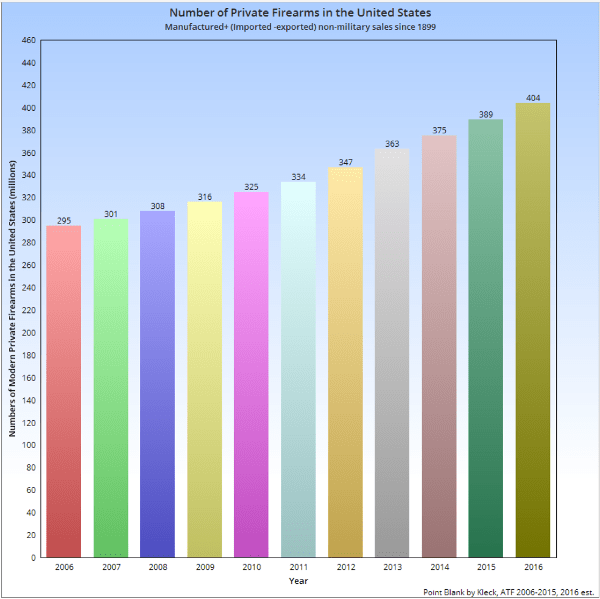 Arizona -(Ammoland.com)- A writer for The Trace recently complained about the numbers of guns Americans own. 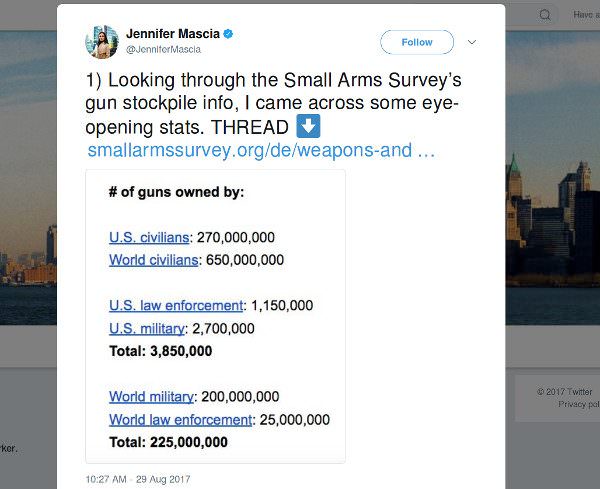 Due diligence is indicated. The 270 million number is over a decade old and rather low. We know better now. The best current number is there are over 400 million private firearms in the United States.

The 270 million number is repeated on the anti-Second Amendment site smartgunlaws.com, for the Law Center to Prevent Gun Violence.  The link fails to mention the estimate from the Small Arms Survey was done in 2007. The data that used for the survey was collected in 2006. The estimate applies to that date, 2006. From smallarmssurvey.org:

The analysis presented here relies mostly on static data, creating only a snapshot of the global firearms balance in the year 2006. There are not yet enough dynamic, time-series reports to permit a reliable sense of how civilian holdings are developing in most countries. The general global impression, though, leaves no doubt that civilians are continually acquiring more-powerful guns. There is a connection between per capita wealth and gun ownership, which is strong enough to suggest that so long as gun ownership laws are not changed, greater national wealth leads to greater gun ownership.

Greater gun ownership may lead to greater wealth. The arrow of causality is not determined by the correlation. Uncertainty about the future also leads to more gun ownership. Private gun ownership increased over 30% during the two terms of President Barack Obama.

In 2012, the Congressional Research Service gave the number of private firearms in 2007 as 294 million, about 24 million more than the Small Arms Survey in 2006. The same document says that by 2009, the number had increased to 310 million.

According to ATF reports on firearms manufacture, import and exports, the number of firearms added to the private stock were (figures rounded to .1 million):

The estimate for 2016 is 15.6 million, based on extrapolation from the FBI National Instant Checks System (NICS).

Calculations using the methods developed by Newton and Zimring are well documented. They do not rely on surveys, and they include the number of modern guns added to the stock from 1899 to 1945.  Firearms manufactured before 1899 are not included.

The number is the cumulative addition of domestic manufacture plus imports minus exports.  It does not count guns shipped to the U.S. military.   The figures are rounded to the nearest million.

The numbers do not account for reduction of the gun stock due to wear and tear, loss, destruction or illegal exportation; or increases of the stock from illegal importation, individual or illegal manufacture, or acquisition from military sources, such as surplus sales to the private market from the U.S. military.

Using the Newton-Zimring and Kleck method and ATF reported figures from 1988 to 2015, gives a total of 389 million private firearms at the end of 2015.

Extrapolation of the FBI NICS checks increases the stock by 15.6 million guns in 2016. That gives an estimate of 404 million guns at the end of 2016.

All three estimates are much higher than the 2006 numbers used for the Small Arms Survey in 2007.  The larger numbers are reasonable, considering booming gun sales in the United States.

Starting with the survey data from The Small Arms Survey, at the end of 2016 there would be 369 million private firearms in the United States.

Using the Congressional Research Office figures, there would be 389 million private firearms.

Use the methods forged by Newton, Zimring, and Kleck, with ATF and FBI figures, there were 404 million firearms in the United States at the end of 2016.

The estimates are 99 to 134 million above the outdated 2006 figure cited by The Trace.

ONLY 400 million? Well, its better than half a million, and a good start to something approaching enough. Let’s see.. if every adult had a personal defensive weapon, a smaller midget gun for deep concealment or perhaps when physically active (sch as jogging, cycing, rowing), and a backup replacement in case the primary handgun needs repair, or perhaps one of a different calibre against the day the main gun’s ammunition is temporarily unavailable…. add in perhaps a home defense shotgun. a bird/small predator gun, a medium bore pest/recreational long gun, a .22, and then a large calibre bigger game hunting… Read more »

Want to drive an anti-gun liberal nuts? Ask them how many Americans owns gun. They say 60 million, the real number is between 100-120 million

It is worth noting that for the Geneva Small Arms Survey, a number of criteria were used to come up with their 270 million number, including gun registration numbers, expert estimates, household surveys, proxy indicators such as GDP and gun suicides, and comparison with similar countries. But even they have admitted that there are no easy rules to rely on, and that “social science, with its emphasis on verifiable indexes, naturally leads to undercounting total civilian arsenals.” Each of the five criteria listed has problems, potentially huge problems. There is no mandatory gun registration in the United States. Their expert… Read more »

You are incorrect.
There is mandatory gun registration of all guns in the state of Hawaii.
Most smart people ignore that law where possible.

That’s only Hawaii, a small state with (probably) relatively few firearms comparatively. What about the other 57 states? :>)

400 million? To quote Winston Churchill, “so little accomplished, so much to do”! 🙂